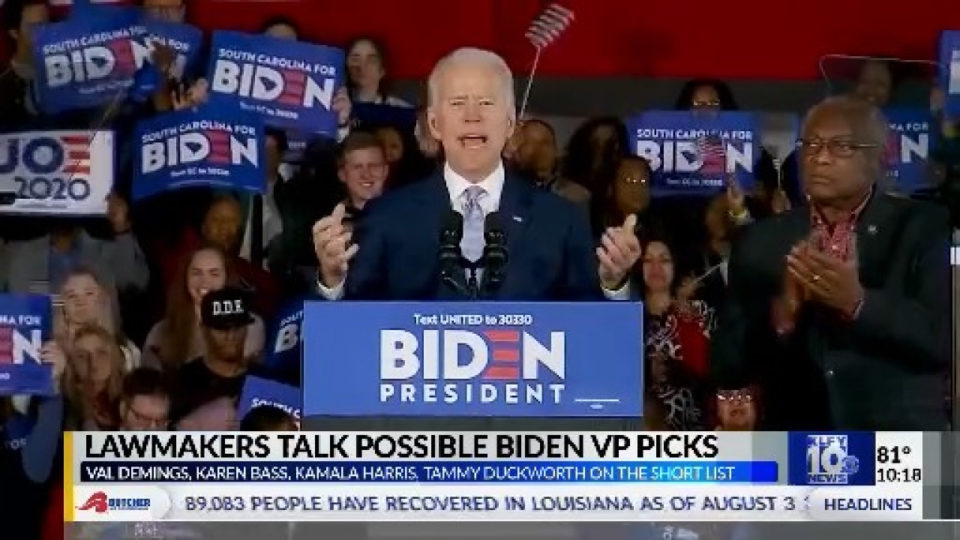 (KLFY) Some of the names on former Vice President Joe Biden’s short list to be his VP also happen to be members of Congress.

Kellie Meyer hears from lawmakers on Capitol Hill about who Biden should choose.

“I strongly support my fellow Floridian.”

Demings is a former police chief and was a part of President Trumps’ impeachment trial.

“If you watched Val Demings in action you saw someone who is eloquent, who is prepared.”

But she’s not the only member of Congress being vetted for Joe Biden’s VP spot.

“All of us are leaders regardless of the title we hold.”

South Carolina Democrat Congressman Jim Clyburn is talking to Biden ahead of the announcement—which is expected to come any day now.

“The Vice President is doing what he oughta do and that is allowing his vetters to do their work, do the polling that is necessary, and then when you go through the results of all of that, then you let your heart and your head take a look.”

“Clyburn isn’t dropping any hints about who thinks Biden should pick.
The Trump campaign tells me there isn’t anyone they think will make a difference.”

Republican National Committee Spokesperson Liz Harrington says all the options are out of touch with America.

“His short list has shown they are not shying away whatsoever from the left-wing fringe of their party and that’s who really will be running things.”

Biden is expected to announce his running mate before the Democratic National Convention which is now just a little over one week away.

President Trump thinks he’s been given vast new powers. Now he’s going to use them