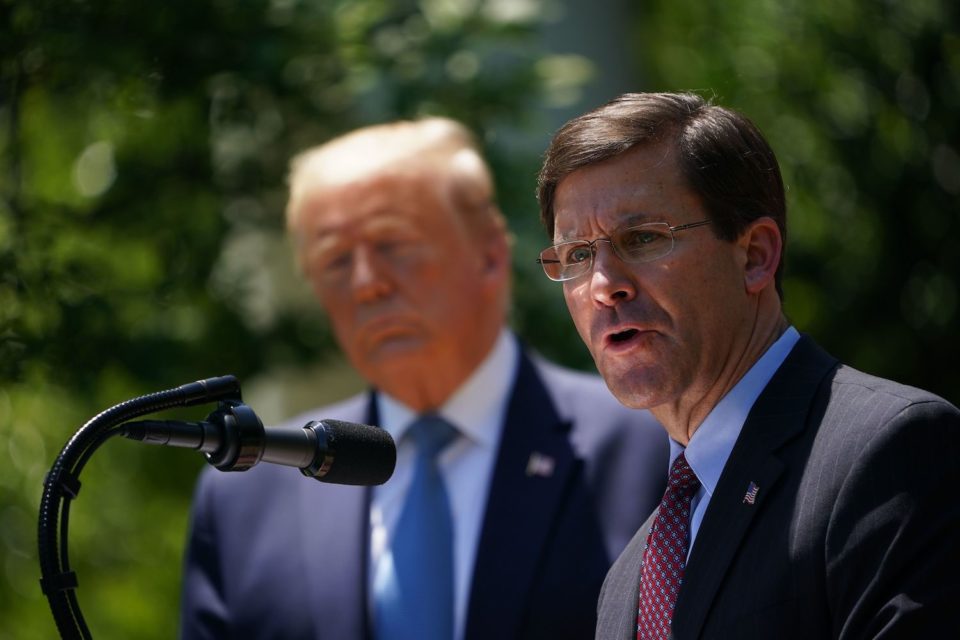 A pair of 20-something White House staffers will begin conducting interviews with political appointees at the Defense Department starting next week, three current and former U.S. officials told Foreign Policy, a move that some fear could lead to more dismissals of Pentagon officials considered disloyal to President Donald Trump.

The White House liaison office sent an email to political appointees at the Pentagon on Wednesday, inviting officials to schedule a meeting with representatives from the Presidential Personnel Office (PPO). The message, described in detail to Foreign Policy, touts the meetings as a platform for noncareer officials to show off their credentials for a position in a possible second Trump term.

Advertised as “office calls,” the meetings over the course of several weeks will include each political appointee in the Pentagon, from presidentially appointed and Senate-confirmed appointees to their subordinates, according to the email. “This is an opportunity for each appointee to discuss their career and interests for 2021 and beyond,” the email said.

The interviews will be conducted by two subordinates of John McEntee, Trump’s former body man who now runs the personnel office: John Troup Hemenway, an undergraduate student at the University of Virginia, and Jordan Hayley, who graduated from Liberty University in June and heads up PPO’s external relations. Politico first reported in April that Hayley had joined PPO, after Hemenway was brought on in March.

“These meetings were set up by DoD so that our political appointees could discuss second-term opportunities at the Department and throughout the administration,” Chief Pentagon spokesperson Jonathan Rath Hoffman told Foreign Policy.

Though the email described to Foreign Policy appears to include all appointed Pentagon officials, a defense official said senior officials such as Defense Secretary Mark Esper are not intended to participate and described the meetings as nonmandatory. Following interviews at the Pentagon, White House personnel are also expected to interview appointees at the State Department and Department of Homeland Security in the coming weeks, officials familiar with the matter said.

But current and former officials who spoke to Foreign Policy worry that the 30-minute interviews will be used to root out officials who aren’t seen as sufficiently loyal to Trump, as the Pentagon has been rocked by the recent departures of several top appointees who broke with the White House on the hold of military aid to Ukraine or had ties to Trump’s political foes.

“I think the assumption is correct—aligned with Trump or you’re out,” a former senior Trump administration official told Foreign Policy.

“Suffice it to say that in my 30 years in government I am unaware of anything quite like this,” Eric Edelman, a former Pentagon policy chief during the George W. Bush administration, told Foreign Policy in an email.

Foreign Policy reported this week that the McEntee-led PPO has been pushing for Rich Higgins, a former National Security Council staffer under Trump fired for a memo that alleged “deep state” political actors were conspiring to overthrow the president, to be hired for a top job in the Pentagon over objections from inside the department. Moving loyalists into political appointments at the Pentagon could position them to move into higher-level jobs if Trump is reelected in November.

The news of the interviews also comes after high-profile departures of officials perceived as disloyal to Trump. The resignation of Kathryn Wheelbarger, who performed the duties of assistant secretary of defense for international security affairs for nearly two years, will become effective on Saturday, after the White House dropped her intended nomination for a top Pentagon intelligence post.

Other recent Pentagon exits appear to be casualties of the House’s impeachment of Trump. Elaine McCusker resigned her role as acting comptroller in June. She was removed from consideration for the permanent post after raising questions about Trump’s aid freeze to Ukraine at the center of the impeachment trial. Former Pentagon policy chief John Rood was also fired in February after finding himself at odds with the president on Ukraine and other behind-the-scenes clashes with the White House.

Reelected presidents often send out top White House officials to head up U.S. government agencies during their second terms. President George W. Bush tapped his national security advisor, Condoleezza Rice, as secretary of state in 2005 after a narrow reelection win. President Barack Obama tried to float then-U.S. Ambassador to the United Nations Susan Rice as his pick to be secretary of state in 2013, but she removed herself from consideration after the Benghazi attacks.

Former Pentagon officials told Foreign Policy that it’s normal for the White House liaison office at the Defense Department to informally check in with political appointees. It’s also not unusual for churn at the end of any administration, and first-term administrations often map out potential personnel changes in advance of a potential second term, said Jim Townsend, a former Pentagon official who served as Obama’s deputy assistant secretary of defense on European and NATO issues for eight years.

But there appears to be little precedent to ask for resignations or remove officials in a comprehensive review.

“I think it’s fair that you want to do an evaluation of the appointees and current roles, but I’ve never heard of anyone doing a political litmus test between one term and the next,” a former Pentagon official said. “It’s very odd.”

“What this White House personnel office is looking for is not people who are good for the job with the right expertise but complete loyalists … regardless of whether they’re fit for the job,” Townsend said.

“This is more about factions within a faction,” said Edelman, who served in four U.S. administrations. “Or a Stalinoid search for ‘wreckers’ or ‘right-wing deviationists.’”

“Shouldn’t they have done this vetting before appointing noncareer people?” said Kori Schake, the director of foreign and defense policy studies at the American Enterprise Institute and a senior State Department official during the George W. Bush administration. She suggested the White House’s renewed interest in loyalty tests could be linked to the quick repudiation by top Pentagon officials, including the defense secretary and chairman of the Joint Chiefs of Staff, of Trump’s efforts to politicize the military during recent nationwide protests over police brutality.

“They’ll try and put supine advocates into position to eliminate the possibility of future repudiations,” she said.

Hayley, the other PPO official who will be conducting the interviews, told a Liberty alumni publication last month that PPO is “the one putting people in place to shape policies.”

“We are trying to find people with certain perspectives and values,” Hayley said in the profile.

The Trump administration has struggled to staff the Pentagon and other agencies for years, as much of the Republican establishment disavowed serving under Trump. Even many who did, such as former Defense Secretary James Mattis and former National Security Advisor H.R. McMaster, were soon defenestrated. With two more departures this month, the Pentagon will have 20 Senate-confirmed positions that are vacant or held by acting officials, according to a Politico tally.

Townsend said the White House personnel office will find it increasingly difficult to get quality people to serve at the end of the administration, especially with Trump’s reelection prospects so uncertain. Even if he wins reelection, many conservative foreign-policy experts could be reluctant to go back into government.

“I’m not sure A-listers and B-listers will be excited to go in. They see what happened in the first term and saw how people like Mattis and McMaster were so burned,” he said.

“You’re not going to see lifeboats rowing toward the Titanic with top people eager to get on board,” Townsend said.

Get impeachment written in – Opinion – The Register-Guard