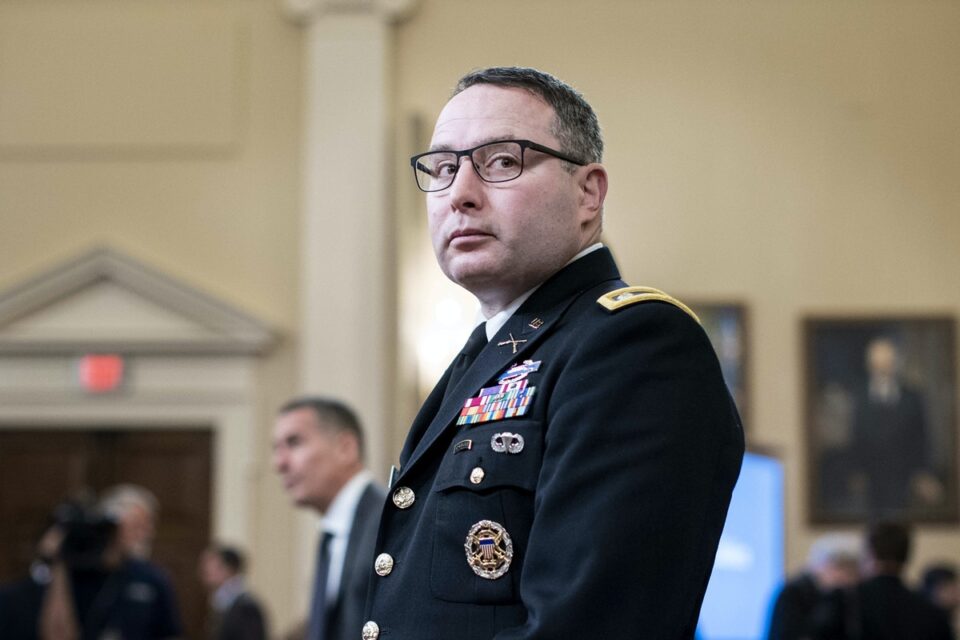 Questions about the relationship between former President Donald Trump and Russian President Vladimir Putin raged after the leaders’ first summit meeting in Helsinki in July 2018. The two men met alone, with only an interpreter present from the American side. What was actually said during the meeting has never been revealed.

Vindman, a retired Army lieutenant colonel who was a key prosecution witness during Trump’s first impeachment, was the director for Russia and Eastern Europe at the National Security Council at the time of the Helsinki summit. In “Here, Right Matters,” a memoir published last month about his role as a whistleblower before and during the impeachment, Vindman briefly mentions that he knew the interpreter who was at the Helsinki summit but provides no further details.

In an interview last week, Vindman expanded on the episode, saying that he found out what was said and that Trump did not betray U.S. national security interests during the meeting. Although he didn’t say so, Vindman’s source was almost certainly the interpreter.

“I don’t want to get anybody in trouble,” Vindman said, “but I have no real deep concerns about what was said in that meeting behind closed doors.” He added, “By my own interactions with people that were in the room, I have relatively decent confidence that there were no kinds of machinations that upset U.S. national security interests. They didn’t advance [U.S. interests] either, but they weren’t catastrophic.”

Vindman made the remarks at a September 15 event hosted by The Intercept and First Look Institute’s Press Freedom Defense Fund, of which I am the director, in partnership with Georgetown University’s Department of Government.

What Trump and Putin actually said to each other in Helsinki has been one of the enduring mysteries of Trump’s years in the White House. Questions about their private meeting and the nature of their relationship only intensified when Trump claimed, in a press conference afterward, that Putin had told him that Russia didn’t interfere in the 2016 election and indicated that he believed Putin rather than the U.S. intelligence community, which said it had conclusive evidence that Russia did intervene in the election to help Trump win. After Democrats took control of the House in the 2018 midterm election, the House Foreign Affairs Committee considered issuing a subpoena to the interpreter, Marina Gross of the State Department, to testify about what was said in Helsinki. Congressional efforts to investigate the Helsinki meeting were later dropped.

A year after the Helsinki summit, Vindman found himself on a collision course with Trump over the president’s illicit efforts to pressure a foreign leader into fabricating an investigation into Trump’s Democratic opponent in the 2020 election, Joe Biden.

On July 25, 2019, Vindman was one of a number of staffers listening in on a phone call between Trump and Ukrainian President Volodymyr Zelensky, during which Trump tried to pressure Zelensky to gin up an investigation of Biden and his son, Hunter. Vindman immediately recognized that Trump’s attempt to pressure Zelensky was illegal and possibly an impeachable offense, and he quickly decided that he had to report it.

First, he went to his twin brother, who happened to be serving as the NSC’s chief ethics officer. Then he and his brother reported what Trump had said to John Eisenberg, the senior lawyer at the NSC. Thus began Vindman’s long road to publicly testifying against Trump before Congress, which turned Vindman into a national figure.

Vindman recognizes that he was more fortunate than most whistleblowers, since he was able to go through legal channels to report the truth rather than going to the press and risking prosecution for revealing classified information.

“Whistleblowers oftentimes do not have clear means to redress what they think are harms,” Vindman said in the interview. “In my case, I had that. I was responsible as director on the National Security Council for coordinating policy for Eastern Europe. I could leverage the system. And that’s what I did at every turn.  I tried to take the procedures that were in place to report wrongdoing. … [It] was maybe an anomaly that I found a way to do this the right way. Not just do the right thing, but do it the right way. It kind of worked out.”

“Whistleblowers oftentimes do not have clear means to redress what they think are harms. In my case, I had that.”

But Vindman still faced intense retaliation from Trump and his cronies. He was forced out of his job at the White House. He retired from the Army after it became clear that its leadership would not stand up for him.

In the interview, Vindman reflected on why he was willing to work at the Trump White House in the first place, since he arrived to work on Russia policy at a time when special counsel Robert Mueller’s Trump-Russia investigation was at its height and questions about Trump and Russia were dominating the news.

Vindman admitted, both in his book and in the interview, that a big factor was his personal ambition to advance his career. But he also said that he believed it was possible for career staffers to handle substantive foreign policy matters even as Trump issued increasingly bizarre public statements and tweets.

Despite the questions about Trump’s relationship with Putin and the Russian government, the Trump administration actually issued formal policies on Russia that were designed to “constrain Russia as a spoiler state,” Vindman recalled in the interview. “I was operating based on documents the president signed, which I thought were quite reasonable. I rationalized some of the president’s rhetoric.”

Vindman said that he and other career foreign policy officials learned to ignore Trump’s public antics. After each of the president’s “ill-considered pronouncements,” Vindman said, senior officials would reassure Vindman that Trump’s rhetoric didn’t change policy. “We just had to deal with this, a really erratic president,” he said.

But it was possible to keep the substantive policy track separate from Trump’s absurdity for only so long. The two collided during the 2019 phone call with Zelensky. Despite what he knew about Trump by that point, Vindman was still shocked. “I just had a hard time believing that the president, with all the baggage that I had witnessed up until that point, would attempt to try to steal an election and force a foreign government to investigate a political opponent,” Vindman said.

“Once he came on the record [on the phone call] and made his views clear, I didn’t see him as above the law. … I saw him as still accountable.”

In the interview, Vindman also criticized Gen. Mark Milley, the former chair of the Joint Chiefs of Staff, following reports that Milley quietly reassured Chinese officials that the U.S. wouldn’t start a war with China and that the U.S. government was stable, despite Trump’s bitter anti-Chinese rhetoric and the January 6 insurrection. Milley was reportedly acting on intelligence that suggested Chinese officials were increasingly fearful that an unstable Trump’s anti-Chinese rants could lead to conflict.

Vindman asked why, if Milley was so concerned about Trump, he didn’t denounce him publicly. “When he had an opportunity to stand up for our democracy after January 6, he didn’t think it was important enough for him to put himself at risk and speak publicly about his concerns about the authoritarian streak or the attempted insurrection,” Vindman said. “That, to me, is troubling.”

American Crime Story Was Set Up To Fail