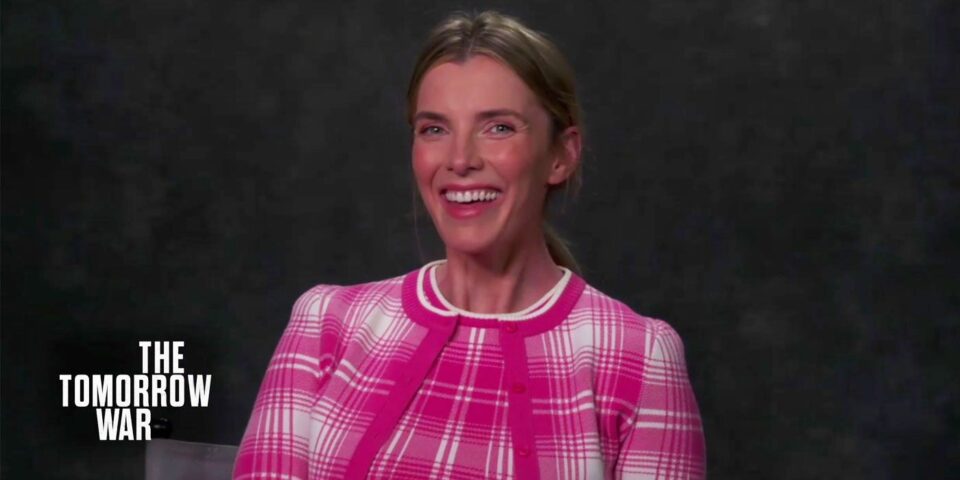 With the release of The Tomorrow War coming up fast, Betty Gilpin took the time to join us for an episode of Collider Ladies Night. Yes, there was a good deal of Tomorrow War and GLOW talk in the mix, but we wanted to share one especially memorable moment from the interview with you first – Gilpin’s flute and Ann Coulter impressions.

You might recall Gilpin was added to the cast of Impeachment: American Crime Story back in January 2020. She was supposed to play Coulter in the new season about the impeachment of President Bill Clinton in 1998, but when COVID upended the industry and drastically changed shooting schedules, Gilpin had to back out of the project. That means she’s got an Ann Coulter impression she’ll never use – except on Collider Ladies Night.

After Gilpin offered up her fake flute impression during our interview, we had to keep the impressions rolling. Back in 2018 during an appearance on Live with Kelly and Ryan, Gilpin spoke about her experience at theater school where Dianne Wiest was one of her teachers and gave a spot-on impression of Wiest. That had to mean Gilpin had more great impressions up her sleeve, right? Sure enough, she didn’t disappoint.

“I was supposed to do American Crime Story: Impeachment and play Ann Coulter, but because of COVID and scheduling, I am no longer doing it.” Gilpin added, “So I have this Ann Coulter impression that goes nowhere!” Not so fast, Betty. That impression is going somewhere right now – straight to Collider Ladies Night viewers! Catch Gilpin’s Coulter impression and also her flute impression in the clip at the top of this article. Also be sure to keep an eye out for Gilpin’s full Ladies Night interview dropping closer to The Tomorrow War’s July 2nd debut on Prime Video.

The Tomorrow War begins in present day when the world is shocked to receive visitors from the year 2051 who time travel to warn the human population that aliens invade and they’re struggling to win the fight. Mankind’s only hope is for present day soldiers and civilians to journey to the future and join the war in 2051.

KEEP READING: Jordana Brewster Addresses Mia’s Return in ‘F9’ and How Paul Walker’s Brian Will Always Be Part of the Universe

Wedding vows will take on a whole new meaning this summer.

Perri Nemiroff has been part of the Collider team since 2012. She co-hosts Collider FYC, The Witching Hour and hosts the interview series, Collider Ladies Night. Perri’s a proud graduate of Columbia University’s Film MFA program and member of the Broadcast Film Critics Association. Perri splits her time between Los Angeles and New York, but devotes every waking hour to her cat, Deputy Dewey.

GOP hands Dems a new line of attack: They’re for ‘Trump over the cops’

Inside Trump’s intense search for a Cheney challenger