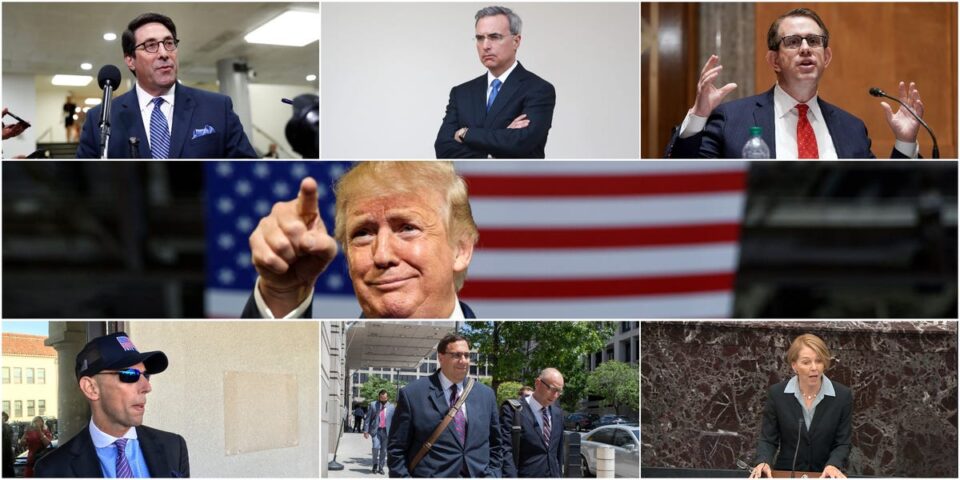 Trump spent his one-term presidency churning through and oftentimes clashing with his lawyers.

During the Russia investigation, he cycled through a cast of high-profile defense counsel, including John Dowd, Emmet Flood, Ty Cobb, Don McGahn, Sekulow and Cipollone, who served either in White House roles or as Trump’s personal lawyers.

Since Trump’s electoral defeat in November, the lawyer churn has only continued — with some of Trump’s most fiercely loyal lawyers suddenly dropping out of his orbit.

Within weeks of the election, Trump’s legal team distanced itself from Powell after the conservative lawyer made a string of inaccurate, conspiratorial, or otherwise bizarre claims about the 2020 vote. Powell at one point pledged to “blow up” Georgia with a “biblical” court filing.

Months removed from the election, she has found herself an outcast from Trumpworld and facing a defamation lawsuit from election infrastructure company Dominion Voting Systems. The litigation has brought more embarrassment upon Powell, who stated in a recent court filing that “reasonable people would not accept” her claims of widespread election fraud “as fact but view them only as claims that await testing by the courts through the adversary process.”

Giuliani, who joined Powell in peddling baseless claims of electoral fraud, has similarly drifted away from Trumpworld, according to the former president’s advisors.

Some Trump advisors told Insider that Giuliani’s diminished status could be linked to Giuliani’s own legal jeopardy as his efforts to overturn the 2020 election results and his extensive dealings in Ukraine come under scrutiny.

But others close to Trump said it was unlikely that the two had completely fallen out given their decades-long relationship.

On Tuesday, Giuliani’s lawyers asked a federal judge in Washington to dismiss a lawsuit in which Dominion Voting Systems alleged that he helped deceive millions of people to believe that the company had “stolen their votes and fixed the election.”

In a separate case, a group of 10 House Democrats joined a lawsuit accusing Giuliani and Trump of conspiring to incite the violent riot at the Capitol. The lawsuit, originally filed by the NAACP on behalf of US Rep. Bennie Thompson, alleges that Trump and Giuliani violated the Ku Klux Klan Act, a 19th-century law that includes protections against violent conspiracies aimed at disrupting Congress’s constitutional duties.

The lawsuit initially named the Oath Keepers militia group and the Proud Boys, a far-right nationalist group, as defendants. But, with the dissolution of the Proud Boys organization in February, House Democrats have amended the lawsuit to name new defendants, including the Proud Boys leader Enrique Tarrio and Warboys LLC, which it describes as a successor group.