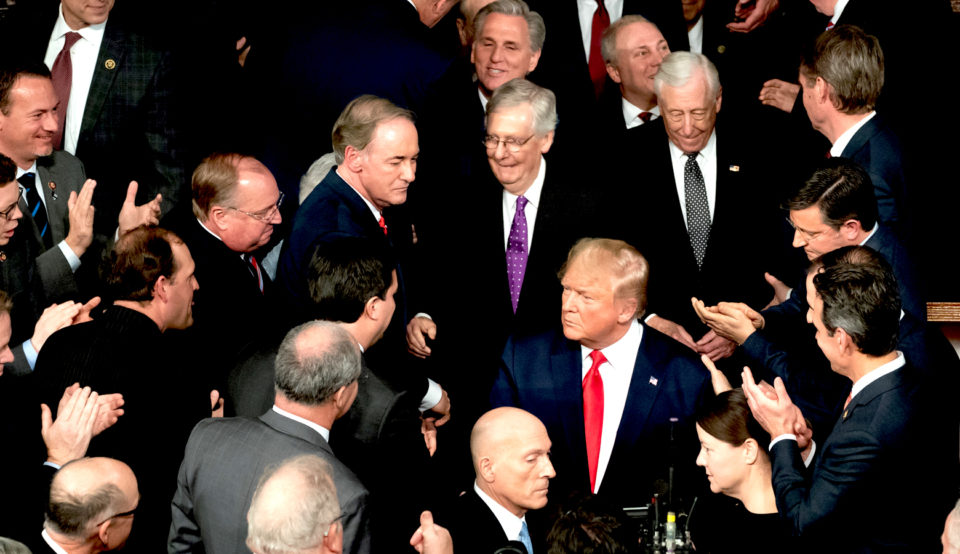 President Donald J. Trump arrives in the House chamber and is greeted by members of Congress prior to delivering his State of the Union address Tuesday, Feb. 4, at the U.S. Capitol in Washington, D.C. (Official White House Photo by Andrea Hanks)

In a rare column for the Washington Post, editorial page editor Fred Hiatt claimed that Donald Trump has committed at least four more impeachable offenses since the Republican-dominated Senate refused to oust him in January after the House submitted articles of impeachment to them.

On February 5, the Senate allowed the president to walk after being presented with two articles of impeachment regarding Trump’s attempt to dig up dirt of potential presidential opponent Joe Biden from Ukraine authorities in return for aid.

At that time, Senator Susan Collins (R-ME) explained away her “not guilty” vote by stating that she hoped the president “… has learned from this case,” before adding that the turmoil of the trial was undoubtedly “a pretty big lesson.”

As Hiatt notes, had Democrats waited a few more months, they would have had more ammo as well as a minimum of four more impeachment charges to levy against Trump.

At the top of his list is the president’s response to the coronavirus pandemic which Hiatt claims showed — and continues to show — “negligence.”

“What makes Trump’s response impeachable is the willful, knowing endangerment of the American people for selfish political ends. The president refused to acknowledge the danger because he did not want the stock market to tank,” Hiatt wrote before adding that Trump’s inaction has led to the U.S. suffering twice as many cases as any other country.

Next on Hiatt’s list was the president’s “abuse of power” as demonstrated by his demand that Attorney General Bill Barr fire the U.S. attorneys in D.C. and the Southern District of New York who were investigating the president and some of his associates.

In addition, Hiatt wrote, “Trump ordered federal law enforcement officers to violate the First Amendment rights of peaceful protesters to enable a photo op near the White House. He deployed the Justice Department to seek prior restraint on publication of a book that displeased him. He sicced the antitrust division on disfavored companies.”

Number three of the list the president’s “abuse of his appointment power,” as evidenced by the president’s wave of retaliation against whistleblowers and administration officials who testified against him during his first impeachment trial, with Hiatt explaining, “Since February, Trump has embarked on a rampage of retribution against anyone who told the truth to House investigators last fall or, even before that, tried to prevent his original sin in Ukraine.”

Lastly, Hiatt accused the president of “abuse of power in foreign affairs.”

… then let us make a small request. AlterNet’s journalists work tirelessly to counter the traditional corporate media narrative. We’re here seven days a week, 365 days a year. And we’re proud to say that we’ve been bringing you the real, unfiltered news for 20 years—longer than any other progressive news site on the Internet.

It’s through the generosity of our supporters that we’re able to share with you all the underreported news you need to know. Independent journalism is increasingly imperiled; ads alone can’t pay our bills. AlterNet counts on readers like you to support our coverage. Did you enjoy content from David Cay Johnston, Common Dreams, Raw Story and Robert Reich? Opinion from Salon and Jim Hightower? Analysis by The Conversation? Then join the hundreds of readers who have supported AlterNet this year.

Every reader contribution, whatever the amount, makes a tremendous difference. Help ensure AlterNet remains independent long into the future. Support progressive journalism with a one-time contribution to AlterNet, or click here to become a subscriber. Thank you. Click here to donate by check.

‘Her fingerprints are all over this’: Susan Collins pummeled after Brett Kavanaugh votes to uphold Louisiana anti-abortion law

Donald Trump is the king of cancel culture

The history-making moments that have happened so far in 2020 — and...