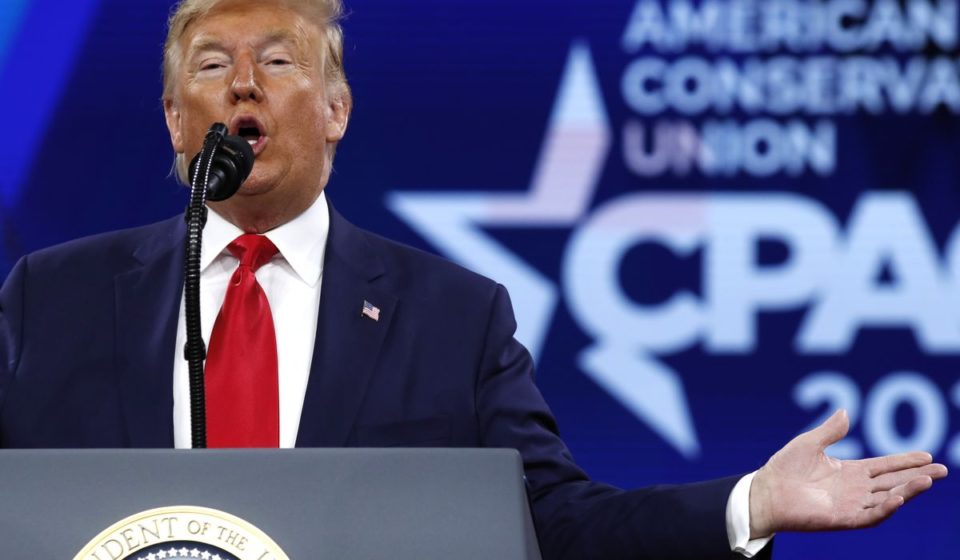 President Trump on Saturday touted how Republicans stuck together in voting to acquit him in his recent impeachment trial except for Sen. Mitt Romney of Utah, who Mr. Trump called a “lowlife.”

“The Republicans stuck together, except Romney of course. Lowlife. Lowlife,” Mr. Trump said at the 2020 Conservative Political Action Conference in suburban Maryland.

That prompted boos from the crowd.

Mr. Trump said he considered getting “half a vote” from Mr. Romney, who voted to convict on one of two articles of impeachment.

“He couldn’t do it all…he wanted to get some nice, free publicity,” Mr. Trump said.

Before the president could even start his speech, the crowd serenaded a beaming Mr. Trump with chants of “USA!”

Mr. Trump is making the fourth appearance of his presidency at the conservative confab. Last year, he hugged the American flag and launched into a stem-winder that lasted more than two hours.

This year’s event underscored the extent to which Mr. Trump has enthralled the Republican Party and shaped it in his image.

“He’s better than Reagan,” said Linda Memmesheimer, a 66-year-old entrepreneur from Illinois. “It’s no longer the Republican party. It’s the party of Trump.”

Two of Mr. Trump’s adult children, Donald Jr. and Ivanka, spoke at the conference and Trump apparel is a common sight in the halls of the Gaylord National Resort & Conference Center.

Attendees also mentioned Don Jr. and Ivanka as potential inheritors of the Trump conservative mantle once the president leaves office.

Elsewhere at CPAC, activists could vote for conservative “heroes and zeroes” in the event’s main vendor hub.

How “historic” are we? – Salon

‘Thank you, God’: Trump revels in reign as absolute king of CPAC | US news