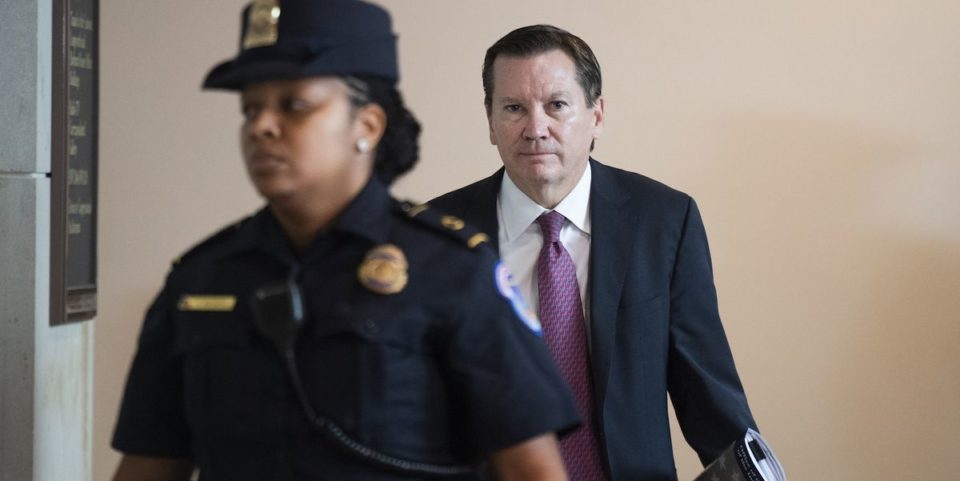 The firing of Michael Atkinson as the inspector general of the intelligence community was assured the moment he chose actually to do his job. Nevertheless, the president*, demonstrating the sheer courage that has marked his entire public career, waited until the end of last week’s regular news cycle to do so. Obviously, he did it under cover of the news of the pandemic, which is the only story on everyone’s mind. Despite its inevitability, the long delay, and the deliberate attempt to bury the news, the firing still has managed to stink to high heaven anyway. From Politico:

But the matter is an urgent priority to some, including Sen. Angus King (I-Maine), who said the Senate should hold a hearing. King, who sits on the powerful Senate Intelligence Committee, said officials such as Acting Director of National Intelligence Richard Grenell and Atkinson himself — whom Trump fired late Friday night — should be put under oath. “It should be an open hearing to have members of the administration come forward and provide an explanation,” King, who caucuses with the Democrats, said in a phone interview, calling Trump’s decision to fire Atkinson “terrible on a lot of levels.”

The easiest way to get fired at Camp Runamuck is to do your job the way it’s supposed to be done, regardless of how vividly it illustrates the clown college that is this administration*. That’s what got Atkinson canned, and he’s not taking it silently, either. In a public statement, Atkinson responded:

“It is hard not to think that the President’s loss of confidence in me derives from my having faithfully discharged my legal obligations as an independent and impartial Inspector General and from my commitment to continue to do so.”

Mmm, this shade is cool and refreshing.

“As an Inspector General, I was legally obligated to ensure that whistleblowers had an effective and authorized means to disclose urgent matters involving classified information to the congressional intelligence committees, and that when they did blow the whistle in an authorized manner, their identities would be protected as a guard against reprisals. Inspectors General are able to fulfill their critical watchdog functions because, by law, they are supposed to be independent of both the Executive agencies they oversee and of Congress.”

And where will the next shoe drop? My money is on the inspector general’s office at the Department of Health And Human Services, currently overseen by Christi Grimm, the principal deputy inspector general. (HHS hasn’t had a full-time inspector general since May 31, because that’s the way things go in Camp Runamuck.) I say this because the morning news was alive with an HHS IG report that pretty much lit the federal response to the pandemic on fire. From NBC News:

Hospital administrators also said conflicting guidance from federal, state and local governments on how to use personal protective gear and other issues has led to “a greater sense of confusion, fear and distrust among staff that they can rely on hospital procedures to protect them,” according to the report from the inspector general for the Department of Health and Human Services, or HHS…

According to the report, one hospital received two shipments from the Federal Emergency Management Agency with protective gear that had expired in 2010. Another hospital system received 1,000 masks from federal and state governments, even though it expected a much larger delivery, and “500 of the masks were for children and therefore unusable for adult staff,” the report said. Elastic on N95 masks from one state government reserve had “dry-rotted” and could not be used, it said.

The report is infuriating and I wish the folks in the HHS IG’s office all the luck in the world. They’re going to need it.

Charles P. Pierce
Charles P Pierce is the author of four books, most recently Idiot America, and has been a working journalist since 1976.

Congress Should Have Been Investigating the Pandemic, Not Impeaching Trump

Impeachment not a good excuse for slow coronavirus response | COMMENTARY