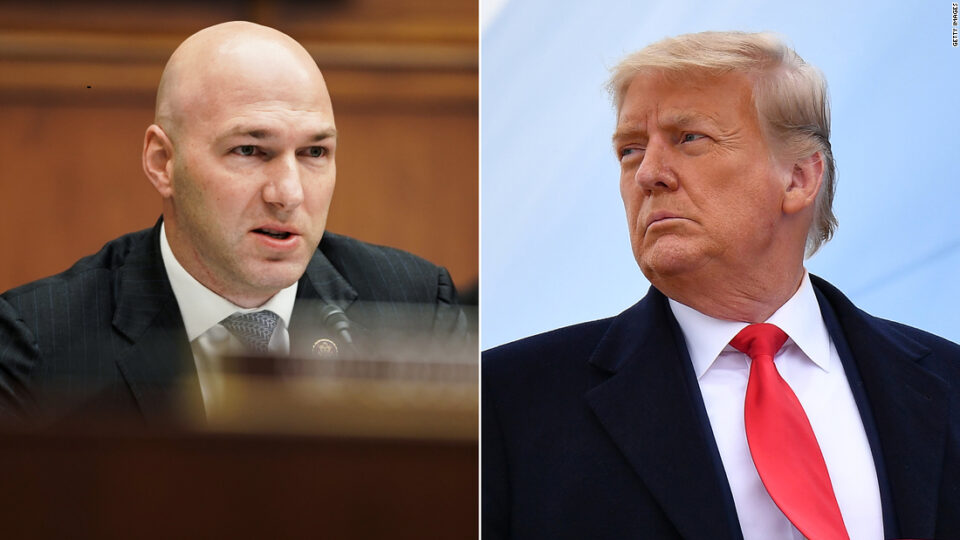 “Max Miller is a wonderful person who did a great job at the White House and will be a fantastic Congressman,” Trump said in a statement released by Save America, the former President’s political action committee. “He is a Marine Veteran, a son of Ohio, and a true PATRIOT.”

Miller announced his campaign for Ohio’s 16th District on Friday, writing on Twitter, “I’m running for Congress to stand up for Northeast Ohioans. They overwhelmingly voted for the America First agenda. But their Congressman betrayed them when he voted to impeach President Trump.”

Trump did not explicitly mention Gonzalez’s vote to impeach him. “Current Rep. Anthony Gonzalez should not be representing the people of the 16th district because he does not represent their interest or their heart. Max Miller has my Complete and Total Endorsement!”

Trump has signaled that he wants to shape the future of the party, putting a target on Republicans whom he’s deemed insufficiently loyal. Looking to make his influence felt on 2022, he hopes to prove to both critics and supporters that he is the GOP’s most effective puppeteer — a role he will likely remind the party of during his appearance at the Conservative Political Action Conference on Sunday.
Gonzalez’s decision to join just nine other House Republicans and all House Democrats to impeach Trump in January unearthed profound anger in his northeast Ohio district, kicking off a localized fight over the future of the Republican Party that pits the two-term congressman against irate constituents eager to expel any Republican who crosses the former President.

But Gonzalez, who easily won reelection to the solidly red seat in November after first winning the district in 2018, has remained defiant in the face of criticism, telling local outlets that he does not regret the vote and is willing to lose his seat over the decision.

Since voting for impeachment, he has continued to make his opposition to Trump heard. Earlier this month, Gonzalez characterized Trump’s expletive-laced phone call with House Republican leader Kevin McCarthy while the US Capitol was under attack on January 6 as problematic for the former President.

“I think it speaks to the former President’s mindset,” Gonzalez said. “He was not sorry to see his unyieldingly loyal vice president or the Congress under attack by the mob he inspired. In fact, it seems he was happy about it or at the least enjoyed the scenes that were horrifying to most Americans across the country.”

Miller, who says on his campaign website that he was a senior adviser to the former President, was identified as a former Trump campaign aide in a 2018 Washington Post story about the Office of Presidential Personnel being understaffed, inexperienced and a source of jobs for friends and family, employing aides who had gotten their positions because of work on the Trump campaign despite their questionable backgrounds.

Citing police records, the Post reported that Miller — an office aide — had been charged with assault and resisting arrest in 2007 following an altercation with another man, a case that was later dismissed.

“Growing up, everyone makes mistakes,” Miller told the Post at the time. “Who I was in the past is not who I am now.” CNN had not independently confirmed the Post’s reporting.

A then-White House official told the Post at the time that Miller’s background serving in the Marine Corps Reserve “speaks volumes to his willingness to serve his country.”

Gonzalez isn’t the only Republican who Trump may target heading into 2022.

CNN reported last month that Trump is focusing political energy on targeting Rep. Liz Cheney of Wyoming — the third-ranking House Republican, who also voted for his impeachment — and he has pledged to campaign against Georgia Republican Gov. Brian Kemp in 2022, whom he has faulted as not doing enough to challenge his election loss in the state.
In another sign of Trump’s looming influence on the midterms, former Sen. David Perdue of Georgia announced earlier this week that he would not launch a 2022 Senate campaign, though he had very recently filed papers to do so. The seeming reversal followed close on the heels of his recent visit to Palm Beach, Florida, where he had played golf with Trump, said a person familiar with the Georgia Republican’s schedule.