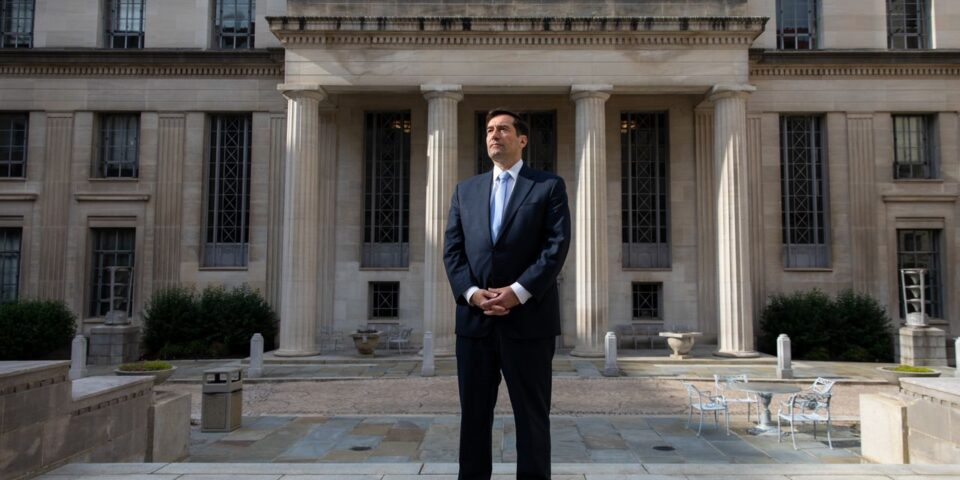 John Demers, head of the Justice Department’s national security division, said the sole time in his three-year tenure he considered resigning came when the agency fell under pressure from then-President

In early January, Mr. Trump was threatening to fire the acting attorney general over the sought-after election investigation, and, Mr. Demers recalled Monday, he was trying to figure out who would sign foreign intelligence surveillance requests and conduct other agency business if he resigned in protest along with other leading officials.

“I didn’t know what was going to happen, I thought that there was a real chance that would be my last day in the department,” Mr. Demers said in an interview in his last week on the job before stepping down as assistant attorney general.

Mr. Demers ultimately didn’t resign over the election issue, after the acting attorney general at the time,

“I was relieved, pleased, glad that it didn’t happen,” Mr. Demers said.

Mr. Demers worked in the Justice Department in the George W. Bush administration when the driving national security concern was terrorism. He returned to the agency in 2018 after working for

to lead the national security division as it trained its sights on Chinese espionage and theft of trade secrets. He presided over the division through the end of the special counsel’s Russia investigation, two Trump impeachment trials, the Jan. 6 Capitol riot and other tumultuous events.

In recent weeks, the agency has been rocked anew by disclosures that prosecutors during the Trump administration sought communications records related to lawmakers and journalists in multiple investigations into leaks by officials to reporters. Mr. Demers declined to comment on those probes and said he supports an investigation by the agency’s inspector general as the best way of getting at the facts.

chief trust and security officer and a veteran national security official, has been nominated to replace Mr. Demers and is awaiting confirmation by the Senate.

The 49-year-old Mr. Demers continued to run the national security division under President Biden, the only senior official at the Justice Department from the Trump administration to remain in the job. That continuity suggests that, while other parts of the department have shifted priorities, the national security efforts are likely to stay in place, former officials said.

Mr. Demers said he expects countering the actions of China, Russia and other foreign governments, as well as domestic terrorism, to be at the forefront of the division’s priorities.

China’s government has denied that it spies or steals intellectual property and has in turn accused the U.S. of exaggerating the threat posed by China for political purposes. Russia has denied involvement in cyberattacks and some other instances of spying.

Mr. Demers oversaw the department’s “China Initiative” begun in 2018 to thwart a range of what he and other officials often described as the Chinese government’s malign activities, including spying, cyberattacks and stealing intellectual property. As part of it, investigators looked at researchers from China with military connections and scientists in the U.S. receiving Chinese government support, to try to prevent the transfer of proprietary information.

Mr. Demers gives an A- grade to the initiative.

“Overall, I think it was a very good way of talking about the problem by being able to weave these threads together and show it and deal with them defensively, the same way I think that the Chinese government is offensively thinking strategically about how to use these levers in order to advance.”

Some civil rights groups and those representing the Asian American community have lobbied the Biden administration to re-evaluate the effort, saying it has created a climate of suspicion in particular of Chinese-American scientists and contributed to a rise in anti-Asian violence.

Some cases targeted tenured professors in the U.S. who are accused of concealing their China work when applying for taxpayer-funded grants for research in America. Lawyers for some of those professors and activists accuse prosecutors of turning paperwork errors into criminal offenses.

One such case, against a former mechanical engineering professor at the University of Tennessee named Anming Hu, ended in a mistrial last week.

The jury deadlocked 10-2 in favor of a conviction, said one of the jurors in favor of an acquittal. Wendy Chandler said in an interview that she felt authorities misled officials at the University of Tennessee to build their case against Mr. Hu.

“He’s a scientist, he’s not human resources or a contract manager,” Ms. Chandler said, adding that she felt the government had pursued Mr. Hu for “admin clerical errors.”

The Justice Department has said it is evaluating its next steps in that case. Mr. Demers, while declining to comment on Mr. Hu’s case, said in general that prosecutors are looking at professors seen as deliberately hiding connections to China.

Many of the professors participated in Chinese government recruitment programs, “but not openly,” Mr. Demers said. “We really focused on transparency and integrity. Are you being honest about where you’re getting your money? And that is a core academic value.”

Mr. Demers said he expects the Biden administration to continue the broader effort, with increased attention to protecting Chinese citizens in the U.S. He pointed to instances of Chinese consulates working to harass Chinese citizens in the U.S. whom Beijing considers fugitives and to suppress speech on U.S. campuses or elsewhere about topics Beijing dislikes, such as China’s crackdown on Hong Kong.

“That is an avenue here that could be expanded,” Mr. Demers said. He said the Justice Department initiative made it difficult for Beijing to pursue its goals, even if it didn’t fundamentally alter the Chinese government’s behavior. “The Chinese government is as aggressive as it’s ever been,” he said.

Mr. Demers also oversaw the department’s effort to improve its process for applying for surveillance warrants for foreign intelligence, following an inspector general probe that found a series of errors in the Federal Bureau of Investigation’s handling of obtaining surveillance of a former Trump campaign adviser. The errors included information known to the agents on the investigation being kept out of the application for the warrant.

In addition to changes already implemented, Mr. Demers said in the coming weeks FBI field agents would start serving as the witness, or affiant, on warrant applications rather than filtering information through headquarters, to try to cut down on previous errors.

“That, I think, will make it much, much harder for anything like that ever to happen again,” he said.

Write to Aruna Viswanatha at Aruna.Viswanatha@wsj.com