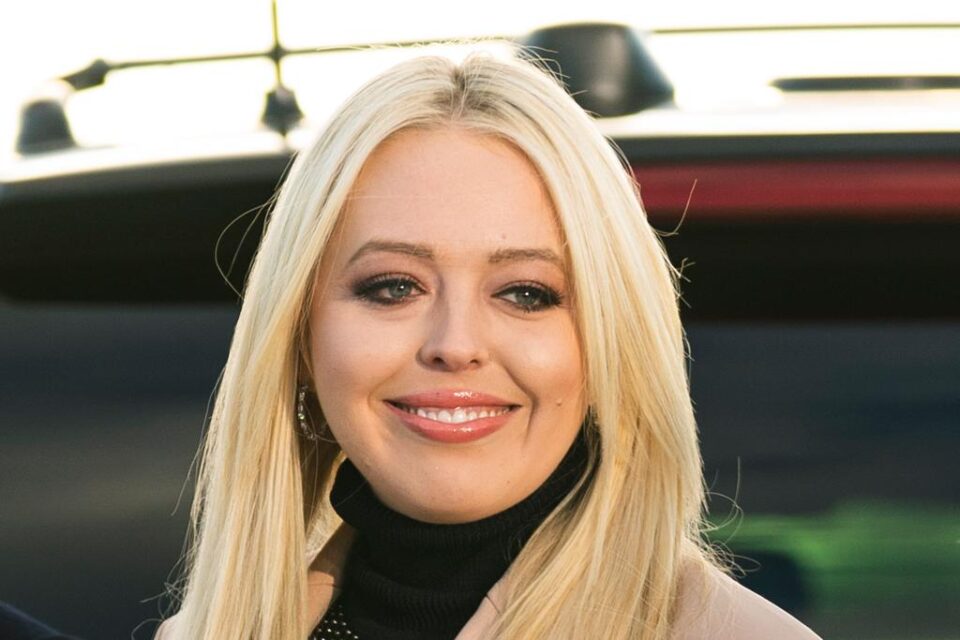 Tiffany Trump celebrated her dad, former President Donald Trump, with a post on Instagram yesterday in honor of Father’s Day.

Also joined by her fiancé Michael Boulous, the lawyer shared two throwback images alongside her father. In the first, Tiffany opted for a floral black dress complete with pink accents with matching black leather heels. For the second image alongside the former commander in chief, Tiffany had on another floral number, this time with a white finish.

For footwear in the second look, the former first daughter opted for her new favorite designer heels.

Bearing resemblance to a silhouette from Valentino, the Rockstud design is a signature element for the Italian brand made from spiked pyramid studs found on everything from sandals and slides to boots and pumps. Tiffany’s choice of footwear is a white cage design set atop a 3.5-inch heel with a rounded toe to finish, bearing resemblance to the Rockstud Cage silhouette. Though the white colorway has since sold out, the sandals once retailed for $1,000; a white shade with a shorter block heel also currently sells for $1,050 at Ssense.

Tiffany herself wore the same set of heels in her post celebrating Mother’s Day back in May. Posin with her mom Marla Maples, Tiffany opted for a unique maxi-length dress complete with a comic-inspired pattern across the entirety of the number.

President Donald Trump’s term ended in a storm of controversy. In January, the House of Representatives started its impeachment trials for Trump following the violent riots led by his supporters that took place at the United States Capitol on Jan. 6.

The articles of impeachment were introduced by House Democrats under the charge of “incitement of insurrection.” After the House officially voted to impeach, the decision moved to the Senate at the end of January. Last month, the Senate voted to acquit President Trump.

The hearings this year were part of the second impeachment trials held against President Trump — the first took place from December 2019 to February 2020. The initial case ended in a Senate acquittal on both impeachment articles.

Will the 1/6 Committee Force Jared and Ivanka to Testify Against Donald...