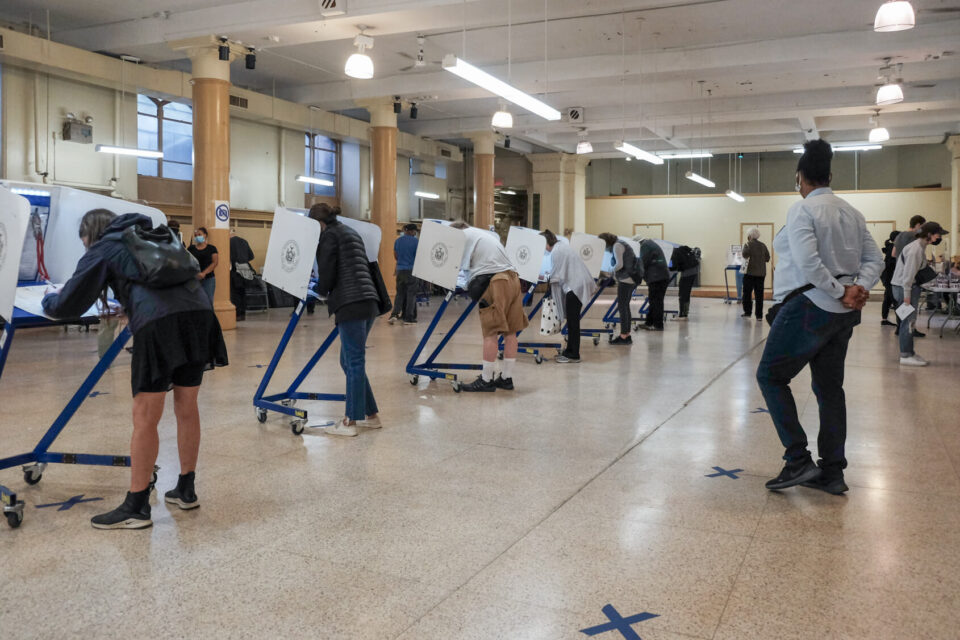 They came. They saw. They voted early.

Thousands of New Yorkers assembled long lines at 88 sites across the five boroughs on Saturday to cast their ballots in the 2020 presidential election on the first day of early voting.

Lines ran for blocks in many places on Oct. 24 as voters of ages, colors and creeds gathered to make their voices heard in the all-important election between the Republican incumbent ticket of President Donald Trump and Vice President Mike Pence against the Democratic duo of former Vice President Joe Biden and California Senator Kamala Harris.

Saturday marked the first time New Yorkers got a chance to vote early in a presidential election. They join the more than 50 million Americans who have already cast votes in the race in other states where early voting is available.

Manhattan early voting sites were anything but a “ghost town” on Saturday. At the Church of St. Anthony of Padua, residents of the neighborhood as well as Little Italy and Greenwich Village gathered on a line that snaked four blocks around the house of worship to cast their ballots.

Voters began gathering at the entrance as early as 7 a.m. Saturday morning. The line moved after the polls opened, and voters relished the opportunity to finally make their voice heard in the election.

Reed Hays of Greenwich Village was the first person on line to get into St. Anthony of Padua for early voting.

There were plenty of lines to get into polling sites across Brooklyn, including at the Barclays Center, home of the Brooklyn Nets. Voters lined up for more than a block to get into the arena and cast their ballots.

From downtown to Bay Ridge to Cypress Hills, the voters came in droves — waiting it out for the opportunity to make their voices heard.

Got here a few minutes after I had intended, looks like I should have planned to arrive hours earlier! Way to go, Brooklyn voters! #EarlyVoting #Barclays pic.twitter.com/U8mm4TcK4s

The first day of early voting in NY and the line wraps around two blocks in Cypress Hills, #Brooklyn…what was that bit about a ghost town? #EarlyVoting pic.twitter.com/uMB2ZYt0bz

This is an above shot of the line to get into the Flatbush, Brooklyn, early voting location at @KingsBklyn on the first day of early voting in New York. I will walk it to judge the true length, but many people have arrived with folding chairs expecting a wait of hours. pic.twitter.com/Lvu6v5ljmd

Bay Ridge, Brooklyn early voting first day! Line is huge and they haven’t opened yet. Heard an older man deep in line with a cane complain about being able to sit, didn’t have a chair, should that be allowed? Should he be reasonably accommodated? @JustinBrannan pic.twitter.com/qNAMNTbk3R

Queens also saw huge turnout at their early polling places on the first day of early voting. The Museum of the Moving Image in Astoria and Queens Borough Hall in Kew Gardens had hundreds of people waiting throughout the morning to cast their ballots.

The long lines could also be seen at polling places in Jackson Heights and Elmhurst, the epicenter of the COVID-19 pandemic back in March and April.

One full hour before the #EarlyVoting polls open, this is the line outside the Jackson Heights Library pollsite!!! Almost made me cry. Together, we are going to save our democracy. https://t.co/vvB29LBTGC pic.twitter.com/t3btx6obZ5

The line for voting in person at the Korean Community Services voting spot is around the block. There needs to be more early voting sites in Queens. pic.twitter.com/IujcLh0Eq4

NYC is wild for limited #earlyvoting locations. All of south Queens is in Rochdale right now. While the turnout is AMAZING ❤️, I’ve already seen so many people get discouraged & leave. We need more early voting locations. 💔 This is only a fraction of the line. pic.twitter.com/8LwzSnMFfw

In line for 1st day of early voting in NYC! Long line at the Elks Lodge in Queens Blvd in Elmhurst but we’re moving! ❤️🇺🇸🙏 #VoteEarlyDay #VoteHimOut pic.twitter.com/hNHg76vzi6

More of the same could be seen in the Bronx, where voters came out in droves to make their voices heard in the 2020 election.

I got to the polls early in the Riverdale section of the Bronx, and still had a 90 minute wait once the voting started. This point in the line I still had another 30 minutes to go. pic.twitter.com/w0QZtddGfu

A wonderful display of democracy in the Bronx! Line goes around the corner twice with early voting starting today in NY #VoteEarlyDay @PIX11News pic.twitter.com/9yTCCutJ9v

Today marks the first day of early voting! Happy to see the residents of the Northeast Bronx out early to participate and make their voices heard. #EarlyVoting #VoteEarlyDay pic.twitter.com/nE9CL9VETH

see next steps in the impeachment process |…

Michigan county board approves resolution in support of impeaching Whitmer