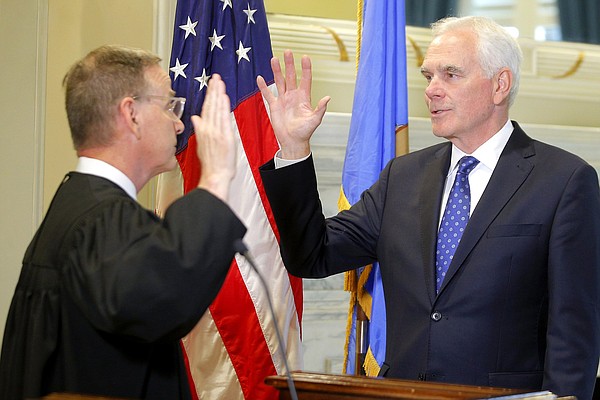 OKLAHOMA CITY — A Tulsa attorney whom the American Bar Association rated as “not qualified” to serve as a federal judge was tapped Friday by Oklahoma Gov. Kevin Stitt to serve as the state’s next attorney general.

After a two-month search that began in May when Republican Mike Hunter stepped down suddenly, Stitt selected John O’Connor, 66, to fill the vacancy, giving the governor an ally in his increasingly contentious relationship with some of the American Indian tribes in the state. Stitt and Hunter, both Republicans, occasionally clashed on various matters, including over Stitt’s decision to renegotiate the state’s gambling compacts with the tribes.

O’Connor will have to run for the seat in a statewide election in 2022, and he indicated Tuesday that he “absolutely” plans to do so.

Stitt, through a spokesman, referred to the national group’s 15-member panel that unanimously voted for O’Connor’s rating as an “out-of-state, liberal special interest group” and said he had “zero concerns” about their opinion.

NEW YORK — A federal magistrate judge in California on Friday set bail at $250 million for the billionaire investor and longtime friend of former President Donald Trump who was indicted earlier this week on a charge of breaking foreign lobbying laws, ordering him to appear in federal court in New York next week.

Thomas J. Barrack, 74, who waived his court appearance for discussion of the prearranged release agreement, was expected to be freed from a jail in Los Angeles later Friday. His ex-wife Rachelle and son Thomas Barrack III were suretors on the bond.

Barrack’s co-defendant, Matthew Grimes, 27, was set to be freed on a $5 million bond. Both men must wear GPS monitoring devices and were ordered to travel to New York for a proceeding Monday.

They were indicted on federal charges related to failing to register as lobbyists for the United Arab Emirates, whose government they worked for over two years beginning when Trump campaigned for office in 2016. The pair reportedly sought to influence Trump’s campaign — and later his administration — to advance policies that were favorable to the wealthy Persian Gulf state.

Barrack, who was chairman of Trump’s inaugural committee, is also charged with obstruction of justice and making false statements to FBI agents in 2019.

Both men were arrested Tuesday.

A third defendant, Rashid al Malik, 43, a businessman from the United Arab Emirates who prosecutors said acted as a conduit to that nation’s rulers, were also charged in the seven-count indictment. Al Malik left the U.S. and remains at large, authorities said.

The service issued a “beach hazards statement” affecting the oceanfront and bayside shores in Pinellas County from 11:30 a.m. Friday through at least 10 p.m. today. Symptoms include coughing, sneezing and watery eyes.

“People with asthma, emphysema or any chronic lung disease may be more sensitive,” the weather service statement said. “Irritation may vary by beach and throughout the day.”

Red tide occurs naturally in the Gulf of Mexico but can be made worse by the presence of nutrients such as nitrogen, which is often found in fertilizers.

More than 1,000 tons of dead marine life have been scooped up in Tampa Bay and nearby coastlines during the outbreak.

Local officials and environmental groups have called on Republican Gov. Ron DeSantis to declare a red tide emergency, but the governor insists adequate resources are in place to deal with the problem.

O’FALLON, Mo. — The O’Fallon City Council has voted 6-3 to hold an impeachment hearing for Councilwoman Katie Gatewood amid a fallout related to the police chief’s resignation last month.

Gatewood has denied any wrongdoing. An impeachment hearing has been set for Aug. 30.

No public accusations of wrongdoing came against Dupuis from the investigation, but he said in his resignation letter that someone on the council had “slandered my name with untruthful lies.”

Dupuis resigned last month over concerns about a new Missouri law that would ban police from enforcing federal gun rules.