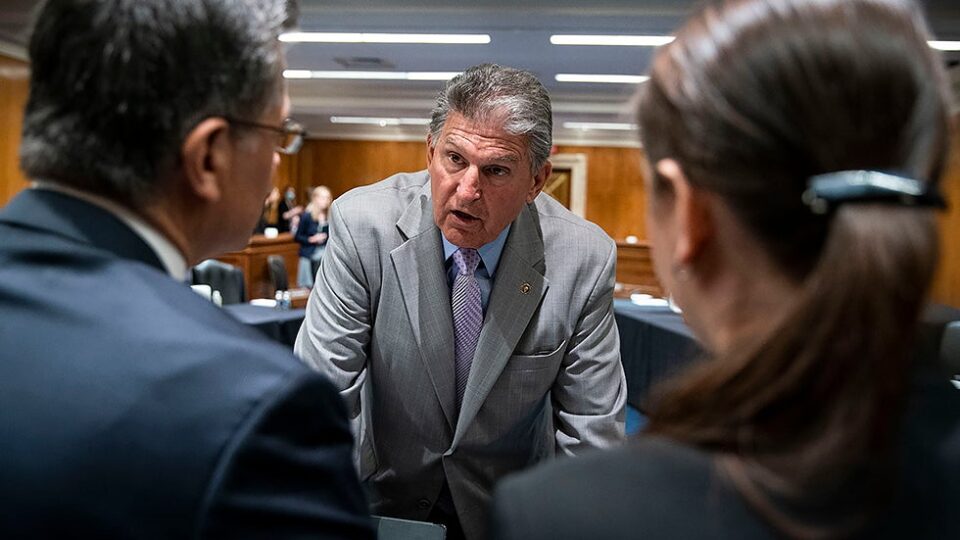 –> A midday take on what’s happening in politics and how to have a sense of humor about it.*

Centrist Democratic Sen. Joe ManchinJoe ManchinBlack caucus chair arrested at Capitol during voting rights protest Speeches aren’t enough: Biden must ditch bipartisanship, endorse ending filibuster Schumer sets up key vote on bipartisan deal MORE (W.Va.), who has been a holdup in Democratic legislative debates, is signaling that he is on board with the $3.5 trillion budget resolution. https://bit.ly/3xKfahH

How we know: Manchin told colleagues during a Democratic luncheon on Wednesday.

What Manchin plans to do: “Senate Democrats say Manchin has indicated he will not stand in the way of the measure moving forward and will be generally supportive as long as he’s kept in the loop on his top concerns: how to pay for the bill and a clean energy provision.”

What else to expect: https://bit.ly/3xKfahH

Via The Hill’s Jordain Carney: https://bit.ly/3kqIYMg

REPUBLICANS ARE NOT PLEASED WITH SCHUMER’S HARDBALL STRATEGY:

Chuck SchumerBiden needs to help end federal cannabis prohibition Biden hails ‘transformative’ child tax credit payments Watchdog files FEC complaint against super PACs linked to congressional leaders MORE (D-N.Y.)]  is trying to jam them and warn that they won’t vote to start debate Wednesday even on a shell bill that the Democratic leader is intending to use as a vehicle for the bipartisan deal once it’s finalized.” https://bit.ly/3krMPsG

Happy Friday! I’m Cate Martel with a quick recap of the morning and what’s coming up. Send comments, story ideas and events for our radar to cmartel@thehill.com — and follow along on Twitter @CateMartel and Facebook.

Did someone forward this to you? Want your own copy? Sign up here to receive The Hill’s 12:30 Report in your inbox daily: http://bit.ly/2kjMNnn

It’s been 25 years since comprehensive internet regulations passed. See why we support updated regulations on key issues, including:

NBC’s Capitol Hill correspondent Kasie Hunt announced this morning that she is leaving the network. https://bit.ly/3B8KEjr

Hunt tweeted: “Some personal news, as they say — thank you to all of the viewers, reporters, lawmakers and everyone else who’s gotten up extra early to help make @WayTooEarly better. I loved doing this show. More soon!” Video of Hunt’s announcement: https://bit.ly/3kq3b4R

Where is she headed?: She did not say. Hunt did say she will have more news “in the next few weeks.”

Two charged in a plot to blow up the Sacramento DNC:

Via The Hill’s Rebecca Beitsch, “Federal prosecutors have charged two men for conspiring to attack the Democratic Party headquarters in Sacramento, with authorities saying the men also tried to coordinate with an extremist militia group.” The full story: https://bit.ly/3kq3HQl

IN THE WHITE HOUSE

Via The Hill’s Morgan Chalfant, “President Biden said Thursday that the United States is considering whether it can take steps to restore internet access in Cuba in the wake of protests against the government.” https://bit.ly/3wN8ZYN

Biden told reporters yesterday: “They have cut off access to the internet. We are considering whether we have the technological ability to reinstate that access.”

What’s happening in Cuba: “Cubans took to the streets over the weekend to protest against the island’s communist government amid a worsening economic crisis. Authorities blocked access to internet and telephone service in an apparent effort to stifle the mass demonstrations, which were being fueled by social media platforms.”

‘YOUNG CUBAN ACTIVISTS CARRY ON THE FIGHT FOR FREEDOM STARTED BY THEIR PARENTS, GRANDPARENTS’:

The floods are devastating:

Via The New York Times, “The scenes of devastation from the floods came from all around Western Europe as the death toll passed 100 on Friday. Roads buckled and washed away. Cars piled atop one another. Houses were inundated to the roof tiles. Frightened residents were being evacuated in the shovels of earth movers.” https://nyti.ms/3BbyHJR

The current death toll: More than 120. That number is expected to rise. https://bit.ly/3z6MD5Y

Tidbit — Republicans who voted to impeach are bringing in more dough:

Via The Hill’s Max Greenwood, “Republicans who voted earlier this year to impeach former President Trump are outpacing their primary challengers in the money race.” https://bit.ly/3wJsth4

Elizabeth (Liz) Lynn CheneyPro-impeachment Republicans outpace GOP rivals in second-quarter fundraising Cheney reportedly told Jim Jordan ‘you f—— did this’ during Jan. 6 riot Former Oklahoma City Thunder employee pleads guilty to illegal demonstration during Capitol riot MORE (R-Wyo.), who was ousted from her post as the No. 3 House Republican in May, raked in the most cash of the group in the second quarter of the year, raising nearly $1.9 million and closing out June with more than $2.8 million in the bank.”

Adam Daniel KinzingerPro-impeachment Republicans outpace GOP rivals in second-quarter fundraising McCarthy, GOP face a delicate dance on Jan. 6 committee Kinzinger: Afghanistan exit ‘a crushing defeat’ MORE (R-Ill.), brought in more than $800,000 for his 2022 reelection bid in the same time frame. He began the second half of the year with more than $3 million in cash on hand.”

WHO IS WINNING THE FUNDRAISING BATTLE:

How other senators stacked up: https://bit.ly/3epjdZ9

Now this is a quote for a framed Home Goods decorative painting:

2021 is the 25th anniversary of the Telecommunications Act of 1996, the last major update to internet regulation. It’s time for an update to set clear rules for addressing today’s toughest challenges.

See how we’re taking action on key issues and why we support updated internet regulations.

LATEST WITH THE CORONAVIRUS

Via Reuters’s David Shepardson, “A senior U.S. health official who signed a sweeping order for masks to be worn on nearly all forms of public transport said they were a key tool in preventing COVID-19 transmission even as some lawmakers call for ending the rules.” https://reut.rs/3es6IMb

From Marty Cetron, director for the Centers for Disease Control and Prevention’s (CDC) Division of Global Migration and Quarantine: “Masks are really powerful and we should make sure they’re part of our arsenal. We mask not just to protect ourselves — we mask because it’s the way we take care and express our concern for each other.”

Breakdown of the numbers: https://cnn.it/2UAgW3y

Total number of vaccinations administered in the U.S.: 336 million shots have been given.

For context: The U.S. population is roughly 331 million.

Breakdown of the numbers: https://bloom.bg/3iVTPLH

Another favorite, because I’m really enjoying these:

And here’s the backstory on the meme: https://bit.ly/3z7zXMu

The House and Senate are out. President Biden

Joe BidenJ.D. Scholten: Democratic Party is ‘getting blown out of the water’ by not connecting to voters Children under 12 could be able to receive the COVID-19 vaccine by winter: report Georgia secretary of state calls for Fulton County elections officials to be fired MORE and Vice President Harris are in Washington, D.C. Biden is heading to Camp David later today.

NOW FOR THE FUN STUFF…:

USA Today has a helpful list of where to get free ice cream on Sunday. https://bit.ly/2VQmY3l

And to get your weekend off to a good start, here’s a corgi dancing with its ears: https://bit.ly/3hLF8vI