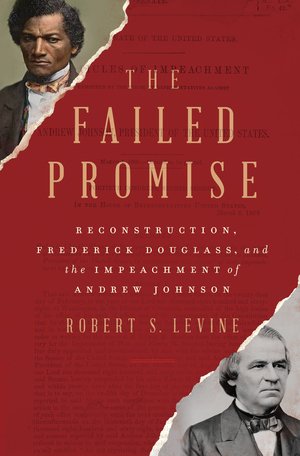 Robert Levine has already written a definitive biography of Black abolitionist and civil rights leader Frederick Douglass. With The Failed Promise, he examines Douglass’ prolific speeches and editorials as related to the first impeachment of a U.S. president, the trial of Andrew Johnson. Levine is fair-minded to Johnson, whom he describes as “racist, paranoid, and narcissistic” yet complicated. He was a Southerner loyal to the Union, a foe of the planter aristocracy and eventually urged for slavery’s abolition. He was impeached for trying to thwart the Congressional Reconstruction plan, which might have forced the South (and the U.S.) on the road to racial justice. Douglass’ words are a reminder that the deeper problem wasn’t over constitutional questions of federal authority but of deep embedded racism.

David Luhrssen lectured at UWM and the MIAD. He is author of The Vietnam War on Film, Encyclopedia of Classic Rock, and Hammer of the Gods: Thule Society and the Birth of Nazism.