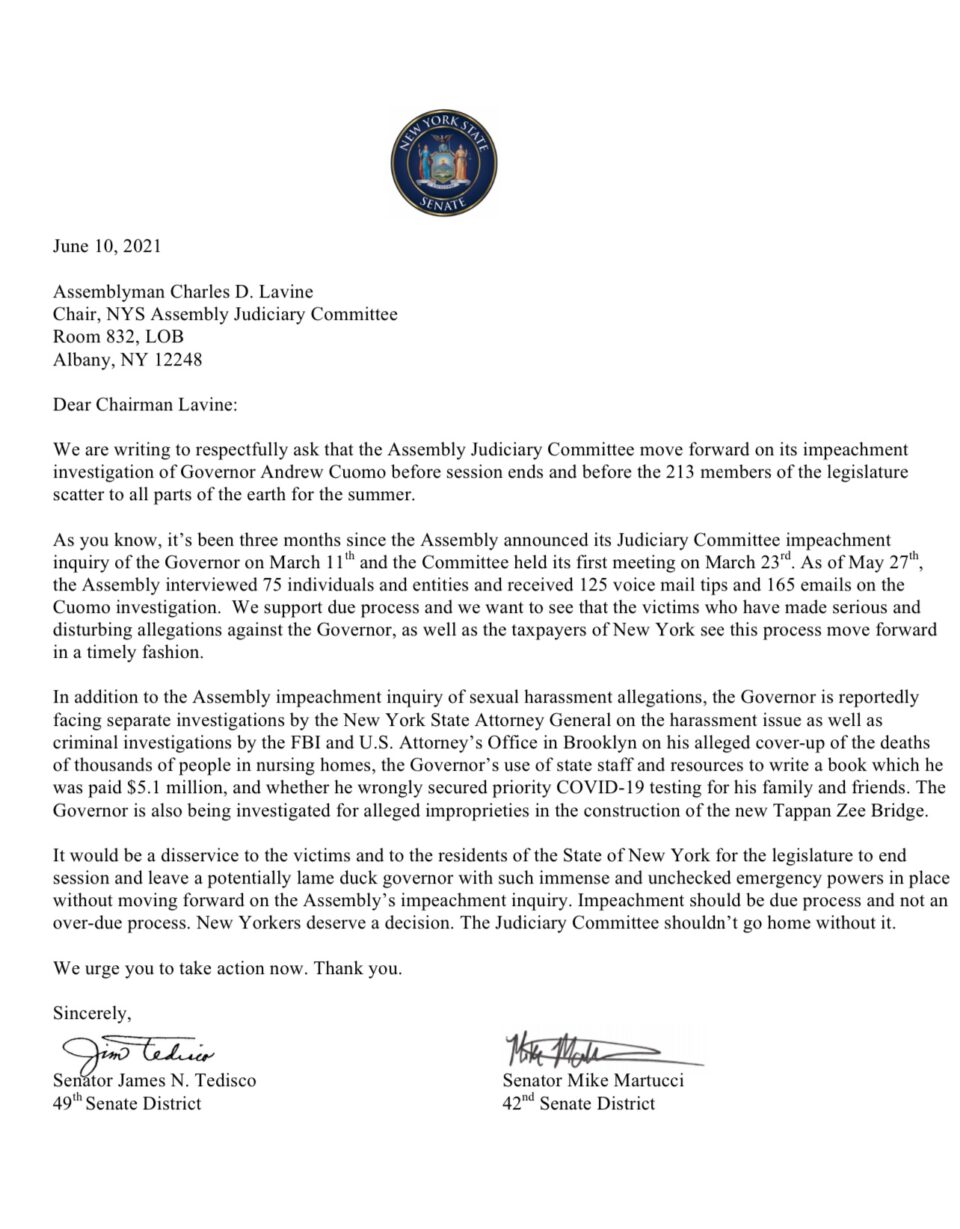 Senator Jim Tedisco (R,C-Glenville) and Senator Mike Martucci (R,C,I-New Hampton) today are calling on the state Assembly to stop stalling and move forward on its three-month-long impeachment inquiry of Governor Andrew Cuomo before the legislature breaks for the summer.

Tedisco and Martucci have written Assembly Judiciary Committee Chair Charles Lavine (see attached letter) with their concerns of the legislature breaking for the year and leaving unchecked a potentially lame-duck governor in place who is facing at least three separate investigations and still has immense “emperor-like” emergency powers.

The Assembly announced its Judiciary Committee impeachment inquiry of the Governor on March 11th and the Committee held its first meeting on March 23rd. As of May 27th, the Assembly interviewed 75 individuals and entities and received 125 voice mail tips and 165 emails on the Cuomo investigation.

In addition to the Assembly impeachment inquiry of sexual harassment allegations, Governor Cuomo is reportedly facing separate investigations by the New York State Attorney General on the harassment issue as well as criminal investigations by the FBI and U.S. Attorney’s Office in Brooklyn on his alleged cover-up of the deaths of thousands of people in nursing homes, the Governor’s use of state staff and resources to write a book which he was paid $5.1 million, and whether he wrongly secured priority COVID-19 testing for his family and friends. The Governor is also being investigated for alleged improprieties in the construction of the new Tappan Zee Bridge.

“Impeachment should be due process, not an ‘over-due’ process and cover-up. New Yorkers deserve a decision and the Assembly Judiciary Committee shouldn’t go home without it! The Judiciary Committee has spent three months investigating the Governor in its impeachment inquiry. Enough stalling and playing cover for Cuomo. The Assembly Judiciary Committee has a responsibility to move forward on impeachment now before the 213 members of the legislature scatter for the summer leaving unchecked a potentially lame duck Governor with his emperor-like emergency powers under a cloud of suspicion. That’s a recipe for disaster,” said Senator Jim Tedisco.

“Today we voted to fully fund an impeachment investigation and trial for Andrew Cuomo. There is no reason for any further delays from the Assembly Judiciary Committee or Speaker Heastie,” said Senator Mike Martucci.  “The many victims of Andrew Cuomo’s repugnant behavior deserve justice and justice delayed is tantamount to justice denied.  The Assembly’s glacial pace indicates that as usual, it cares more about the rights of the perpetrator than it does the rights of the victim.”

Cuomo is handpicking his own impeachment jurors