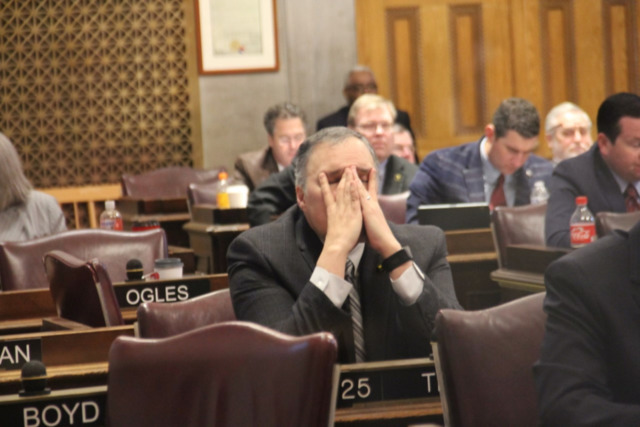 Gov. Bill Lee was on the first floor of the state Capitol telling reporters that he had declared an emergency related to the ongoing spread of COVID-19.

Meanwhile, one floor above him, two dozen championship cheerleaders from a Williamson County middle school that was shuttered due to coronavirus concerns were crowding onto the floor of the Senate to be recognized. The chamber spent part of its floor session deciding whether to honor President Trump for his acquittal in the Senate’s impeachment trial last month. They approved the resolution overwhelmingly.

In the House, business was similarly nonessential. The body debated a bill that would make the Bible the official state book. Even some Republicans were squeamish about the measure, pushed by Republican Jerry Sexton of Bean Station and others. After debating the bill for 20 minutes, Majority Leader William Lamberth asked to delay a vote so that members could get on the road before storms swept through the Midstate. Last week, Lamberth and other legislative leaders decided to hold legislative meetings hours after deadly tornadoes cut a path of destruction that came within a couple of miles of the Capitol itself.

Despite a wave of event cancellations around the world — including the SEC basketball tournament a few blocks from the Capitol — the legislature soldiered on. Rep. Andy Holt promised his colleagues that the annual Ag Day on the Hill would go on as planned next week — including, the Dresden Republican assured the House, the traditional cow-milking contest. (Later Thursday, Senate Speaker Randy McNally and House Speaker Cameron Sexton said they would encourage groups visiting the Capitol in the coming weeks to reschedule or postpone.)

Democrats in the legislature seemed more concerned with the progress of the coronavirus. Nashville Rep. John Ray Clemmons asked legislative leaders for a temporary adjournment (they said no), and Jason Powell, another Nashville Democrat, said he was closing his Capitol office to visitors for the time being. Democrats also asked Republican leaders to close state buildings to visitors, eliminate nonessential legislative meetings and send all nonessential state employees home with pay.

While Lee did not suggest that the legislature should close up shop, instead deferring to legislative leadership, he did say he had instructed his staff to expedite their budget process in order to accomodate the House and the Senate should they decide to pass a budget quickly and get out of town. (The only task required of the legislature is to pass an annual budget before July 1.)

But House Speaker Cameron Sexton downplayed the need for urgency.

“Everybody says we’re moving at a pretty good pace right now,” he told reporters, adding that he would continue to reassess the situation.

He also suggested the spread of the virus was not a public health crisis (“You can use that word,” he said), and said Lee only declared an emergency to get federal funds, not because the situation is actually an emergency.

Senate leadership seemed more willing to make changes to operations in the face of the disease’s spread. Senate Speaker McNally said Thursday he would be open to expediting the budgetary process.

As the number of confirmed COVID-19 cases in Tennessee doubled Thursday, Lamberth too downplayed the need for changes to legislative operations and suggested mass quarantines, like those underway in other countries. Lamberth said such arrangements were “simply an impossibility” in the United States.

“We’re preparing for the worst, but we’re nowhere near that point at this juncture,” he said.