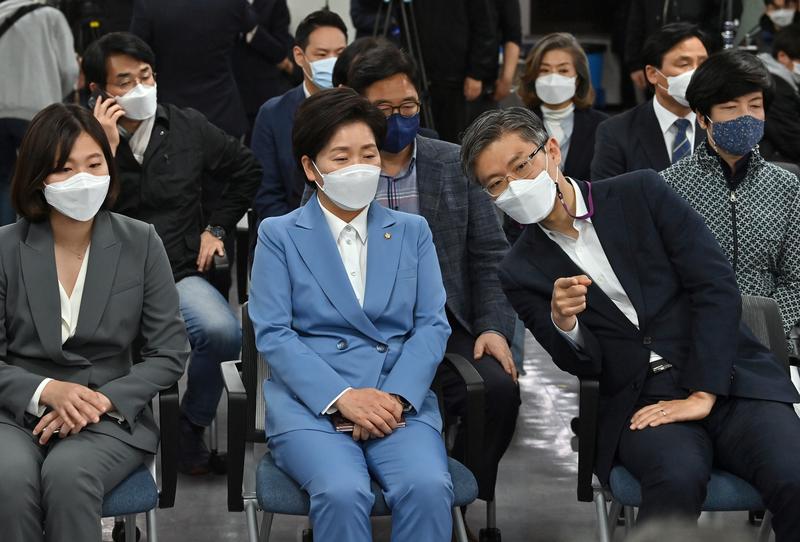 (Refiles to correct time reference in lede para to Wednesday)

Tens of millions of South Koreans voted on Wednesday to elect chiefs of the country’s two largest cities, the capital Seoul and the port of Busan, among 21 local offices up for grabs.

The election was a key barometer for potential political shifts by Moon’s progressive Democratic party with less than a year left before the next presidential election.

Earlier surveys had predicted a landslide victory for Oh.

In Busan, People Power’s Park Hyung-jun also led with 64%, far ahead of Democratic contender Kim Young-choon at 33%, according to exit polls.

Oh expressed gratitude to voters after the polls were released, without elaborating, and Park thanked workers who helped with her campaign, the Yonhap news agency said.

Both mayoral offices were vacated when their liberal incumbents were caught up in sex abuse scandals, including the longtime Seoul mayor who in July was found dead after being accused of sexually harassing a former secretary.

The scandals have combined with runaway housing prices, worsening inequality and a deterioration in ties with North Korea to sap political support for Moon and his party.

Accusations that officials at South Korea’s state housing corporation tried to use insider information to cash in on runaway property prices threw new fuel on that issue ahead of the special election.

With less than a year to go until the March 9, 2022 presidential election, polls suggest the housing scandal is boosting the conservative opposition, which has been in disarray since the impeachment in 2017 of then-President Park Geun-hye.

Moon came to power in the wake of Park’s scandals, promising to generate jobs, crack down on corruption and create a level playing field for all Koreans.

But discontent over the perceived failures of his economic policies has wiped out earlier surges in his approval ratings driven by the government’s handling of the coronavirus pandemic, dragging down the numbers to all-time lows in recent weeks.

Inside Trump’s Stable of Lawyers