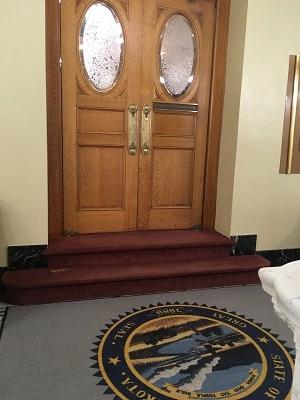 South Dakota’s State Constitution has never been tested in regards to impeachment from office.

Article 16 of the State Constitution governs the process of removing high ranking state officials. It’s origins date back to the time of statehood.

The State House holds the sole power to implement impeachment proceedings., but a majority of the members in the House first must approve articles of impeachment.

The State Senate is empowered to try a case. The process in the Senate looks very much like a court proceeding with rules of due process defining the timeline.

The Senate is prohibited from hearing the case for at least 20 days after the notice of impeachment is served upon the impeached state official. Rules of evidence, discovery and subpoena power are all available as the Senate hears the case.

Section 5 of Article 16 requires the impeached state official be ‘suspended from duties’ from the time between impeachment and acquittal. The same section goes on to state, “No officer shall exercise the duties of his office after he shall have been impeached and before his acquittal.”

A Senate conviction means, “removal from office and disqualification to hold any office of trust or profit under the state.”

Article 16 was last reviewed and modified by voters in the mid 1970’s.

It has never been invoked but was briefly discussed by lawmakers in 1935 after Governor Tom Berry used state guardsmen to break up a strike in Sioux Falls. Berry lost his re-election bid in 1936.

How possible Ravsnborg impeachment by the legislature would look – KELOLAND.com

Trump to take aim at Biden in speech to US conservatives |...

How Donald Trump is building a political operation to cement his hold...