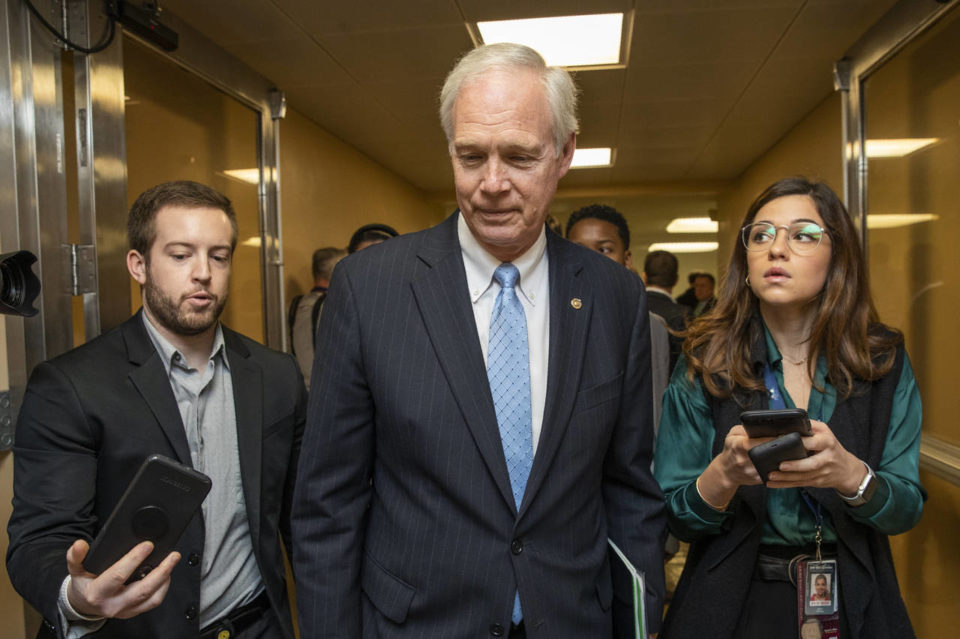 Sen. Ron Johnson, R-Wis., speaks to reporters as he arrives at the Capitol in Washington, Monday, Jan. 27, 2020, during the impeachment trial of President Donald Trump on charges of abuse of power and obstruction of Congress. (AP Photo/Manuel Balce Ceneta)

A Republican-led Senate committee has postponed a subpoena vote as part of its investigation into former Vice President Joe Biden’s son, though the chairman of the panel says the probe related to the Democratic presidential front-runner will move forward.

The Senate Homeland Security and Governmental Affairs Committee scrapped a vote Wednesday on a subpoena to interview and obtain documents from a witness in the panel’s probe of Burisma, a gas company in Ukraine that paid Hunter Biden to serve as a board member. The subject of the subpoena, Andrii Telizhenko, was a consultant to a lobbying firm that worked with Burisma.

In a note to committee members, Senate Homeland Security and Governmental Affairs Chairman Ron Johnson, R-Wis., said the committee will instead subpoena the lobbying firm, Blue Star Strategies, directly to obtain the documents.

There is no evidence of wrongdoing by the Bidens, and Hunter Biden has denied using his influence with his father to aid Burisma. But Republicans coming to President Donald Trump’s defense during and after last year’s impeachment trial have encouraged investigations of Hunter Biden’s activities, questioning whether they created a conflict of interest for Joe Biden as the former vice president worked on Ukraine policy in the Obama administration. Democrats say the investigations are politically motivated and designed to hurt Biden in his presidential run.

In the note to members before the scheduled vote, Johnson said there had been bipartisan meetings on the subject and the vote on the Telizhenko subpoena would be postponed “out of an abundance of caution, and to allow time for you to receive additional briefings.”

At the meeting that had been previously scheduled to consider the subpoena, Johnson told members that the panel will still be moving forward with the investigation, but “in this setting, the less said the better … in this setting, I’d rather not get into it.”

As Democrats have criticized the probe, Johnson has insisted his committee’s investigation is not political. He said last month that “the American people have a right to know how their government officials conducted official business, whether certain parties received special treatment, and whether any apparent or actual conflict of interest unduly influenced U.S. policy.”

Johnson pointed to letters he wrote the top Democrat on the panel, Michigan Sen. Gary Peters, in February on his intent to pursue the probe, which was before Biden won several states on Super Tuesday and revived his candidacy.

Trump, though, has been clear about his intentions. Asked about investigations into the Bidens on Fox News last week, Trump said it will be a “major issue” in the campaign. “I will bring that up all the time,” he said.

Trump’s efforts to have Ukraine investigate Hunter Biden’s role as a board member for Burisma were at the heart of House Democrats’ impeachment probe last year. He asked Ukrainian President Volodymyr Zelenskiy to investigate the Bidens on a July phone call that was revealed by a whistleblower’s complaint last fall.

The House impeached Trump in December for pressuring the Ukrainian government while withholding military aid to the country. The Senate acquitted him in February.

Copyright © The Associated Press. All rights reserved. This material may not be published, broadcast, rewritten or redistributed.

Brookings Register | Honey, we blew up the presidency