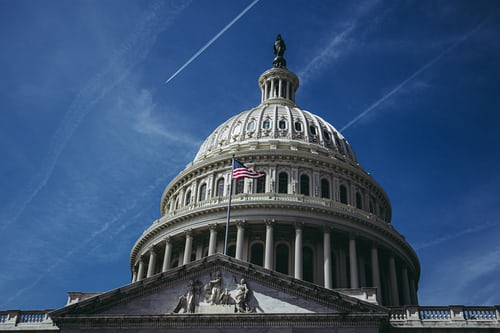 Frustrated with successive failures to agree upon the  of the U.S. Constitution, the American Senate has agreed to hand over control of the Trump Impeachment trial to Jackie Weaver, of the East Cheshire Association of Local Authorities. The unlikely star of the Handforth Parish Council viral Zoom meeting agreed to step in when senior Republicans failed to follow establish protocols or agree to due process, and she immediately threw out a couple of angry, shouty men who had been arguing about who was in charge of proceedings on Capitol Hill.

‘In my colleague’s defence’ said Senator Ted Cruz,  ‘this is the American Senate, Jackie Weaver really does have no authority here.’

However the Republicans and Democrats were unable to move forward on the legality of impeaching a President who was no longer in office, even when Mitch McConnell shouted ‘Read the standing orders! Read them and understand them!’  The Republican leader was then informed that would be shut out of the meaning, until he became reasonable again, which most likely is ‘never.’ Jackie Weaver said that if she had to, she would throw out all the angry old white men. ‘But that’s the entire Republican Party’ said Kevin McCarthy.

Republican Ted Cruz, facing deep embarrassment about his political position – needing to be seen to be supporting the former president, while privately hoping for a Trump prosecution that would help his own political prospects, was so embarrassed that he opted to use a cat face. This was particularly surprising given that he was not on a Zoom call, but in the building itself, but Cruz hoped that given everything else that has happened recently, nobody would think him putting on a cat mask was particular unusual.

Another senator tried to pretend he was stuck on mute, even though he too was in the room for real and this wasn’t very convincing.

Asked if being put in charge of the Senate might risk the power going to her head, Jackie Weaver said ‘I AM GOING TO WIN BIGLY IN 2024, MAKE EAST CHESHIRE GREAT AGAIN!!’ and then groped Nancy Pelosi.

Trump: My heart is with those standing up for the rioters |...