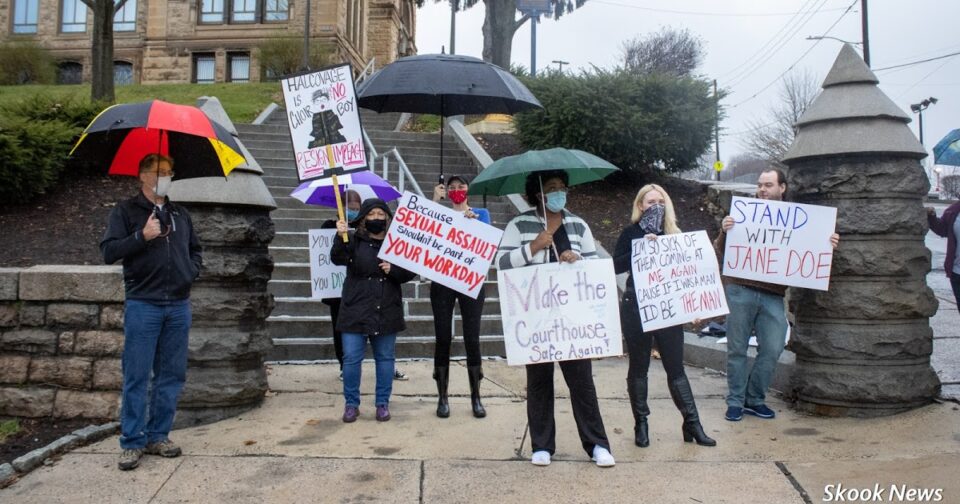 Almost two weeks since the previous rally, the Schuylkill County Democratic Women’s League and Schuylkill County Young Democrats have scheduled a second rally to call for the resignation of County Commissioner George Halcovage and to raise awareness for Sexual Assault Awareness Month.
“Sexual assault and harassment are not partisan issues—and this even is not a partisan event. Democrats, Independents, and Republicans must all stand together to take back our courthouse.” said in an announcement.

The rally is scheduled to take place Saturday, April 10th starting at noon on the steps of the Schuylkill County Courthouse, Pottsville.

The two groups have been calling for the resignation or impeachment of Halcovage after reports emerged in June 2020 that he had violated the County’s Sexual Harassment Policy #2005-18 (Revised September 2013), the Conduct and Disciplinary Action Policy #2005-19; and the Physical and Verbal Abuse Policy #2007-02 (Revised March 2007).

The investigation into charges was sent to the Pennsylvania Attorney General’s Office and concluded after citing the statute of limitations of the case.

On March 16th, 2021, a lawsuit was filed in Federal Court against Commissioner Halcovage for his alleged sexual harassment of four female county employees.

Senate and House delegates from Schuylkill County have said they are looking into the impeachment process.

On March 28th, 2021, the first rally was held where approximately 12 people attended.

Commissioner Halcovage has not provided any recent comments on the investigation or the matter and has continued his duties as Commissioner in the Schuylkill County Courthouse.

Letter: Impeach Joe Biden and his crony Kamala Harris for treason against the United States of America !!! – Arizona Daily Star