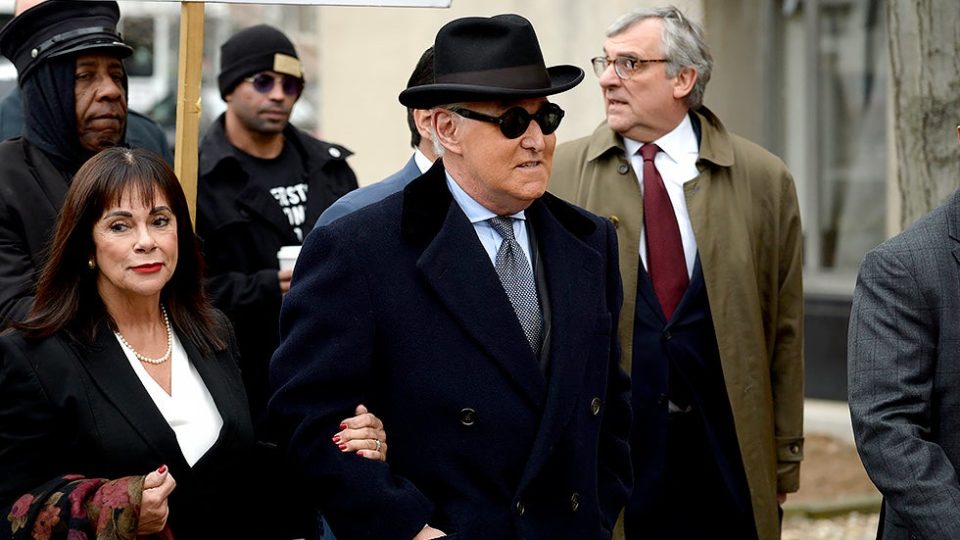 With his sentencing this week, “agent provocateur” Roger StoneRoger Jason StoneComey responds to Trump with Mariah Carey gif: ‘Why are you so obsessed with me?’ Attorney General Barr is in a mess — and has no one to blame but himself Maxine Waters: Gang members have ‘more integrity’ than ‘street player’ Trump MORE finally provoked himself into prison. However, his latest “performance art” may be nowhere near its conclusion. That is not because he has a “very good chance of exoneration,” as President Trump

Donald John TrumpComey responds to Trump with Mariah Carey gif: ‘Why are you so obsessed with me?’ Congress to get election security briefing next month amid Intel drama New York man accused of making death threats against Schumer, Schiff MORE himself predicted. Stone has about the same chance of exoneration as he does of canonization.

Rather, it is not clear that Stone received a fair trial due to alleged juror bias or, even if his trial is now finished, whether it will become undone by a presidential pardon. If nothing else, one thing should be clear. Stone holds a far greater claim to a new trial than to a presidential pardon.

The trial of Roger Stone

The decision of Judge Amy Berman Jackson to move forward with his sentencing was a surprise to many of us, following disturbing reports of potential juror bias by the trial foreperson. It was a curious twist on the position of the Queen of Hearts in Alice in Wonderland, who declared, “Sentence first! Verdict afterwards.” In this case, the court decided to resolve the sentence before resolving if there was a valid verdict.

I have previously discussed the statements made by Tomeka Hart before she became the jury foreperson. She exhibited intense hostility against Trump and his associates and protested against the administration. She also expressed support for investigations of the administration and even discussed this case. Worse yet, the transcript of the voir dire hearing did not suggest that the defense counsel was aware of this history. Either she disclosed the information and defense counsel was less than effective, or Hart had withheld the information and was less than transparent.

Jackson may have two equally unappealing choices. First, the court could order a new trial, making this sentencing drama a meaningless exercise. Second, she could dismiss any concerns as speculative and refuse to take any action. Such a decision would make a mockery of the jury selection process. What is the value of voir dire if a juror with such alleged bias can find her way not just onto the jury but into the position as foreperson? If there was indeed a failure to disclose, despite multiple questions on the juror survey seeking such information, then the failure to act would make a mockery not just of the judicial process but of the court itself.

While Stone is hardly a sympathetic figure, and certainly garnered little sympathy from the court in his misconduct as a defendant, he may still be the victim here. It is unfair to assure defendants that they are entitled to unbiased juries but then shrug when the forepersons are found to have clear bias or failed to disclose material information in voir dire.

The court demands the impossible if it wants clear proof that, if not for such bias, the juror would not have voted to convict or that the jury would have reached a different conclusion in the case. If there is a due process right to an unbiased jury, then there should be a presumption in favor of the defendant when bias is uncovered. In other words, Stone should be given a new trial. I doubt that he would be exonerated, however, there remains a serious question of whether he was properly adjudicated.

Should he receive a pardon?

It is equally clear that Stone should not receive a pardon and, even if he did, Trump would be the last president who should grant it. I have been critical of the heavy handed investigation and prosecution of Stone. He has long cultivated the role of evil jester of American politics, from the Richard Nixon tattoo branded on his back to his relishing dirty tricks against opponents. He finally crossed the line by communicating with witnesses in the special counsel investigation by Robert Mueller

While the prosecutors piled up counts, particularly over false statements, Stone was certainly a legitimate target and legitimately convicted. He is neither innocent nor contrite, the two common elements in pardons and commutations. Stone never tried to be remorseful. He was more focused on being useful. That was precisely the point of Jackson, who said Stone “was not prosecuted, as some have claimed, for standing up for the president. He was prosecuted for covering up for the president.”

While I found that statement to be sensational, it captured the image that Stone himself put forward in public. He maintained that he would never give evidence against the president. For Trump to pardon him would be legitimately denounced as a misuse of that constitutional authority. That would be the case even from someone who does warrant a pardon.

For instance, former national security adviser Michael Flynn holds a much greater claim to being unfairly prosecuted for a single false statement. His case became even more glaring when FBI officials, such as fired former acting director Andrew McCabe, were accused of lying to investigators but were not prosecuted. McCabe was even involved in the Flynn probe. Nevertheless, Flynn is not likely to receive much if any jail time. If he is to be pardoned, then it would be better left to another president who was not directly involved or targeted in the underlying investigation.

Trump could of course still pardon all of the defendants in the Mueller investigation. The Constitution leaves the pardon power to the discretion of presidents, and the history of such pardons has been neither pristine nor inviolate. President Bush pardoned Iran Contra defendants despite allegations of his own involvement in that scandal. President Clinton pardoned his own brother, as well as donor and fugitive Marc Rich, who was neither innocent nor remorseful. President Harding and his attorney general were accused of selling pardons. One such pardon was given to Ignacio Lupo, a top mob enforcer suspected in at least 60 murders.

Presidents have given pardons to political allies, donors, and friends. But none of that excuses adding another sordid pardon to this checkered history. Stone was not wrongly prosecuted given his actions. He was wrongly convicted, however, if reports of juror bias are true. That gives him a legitimate claim for a new trial, but not a presidential pardon.

Jonathan Turley is the Shapiro Professor of Public Interest Law for George Washington University and served as the last lead counsel during a Senate impeachment trial. He testified as a witness expert in the House Judiciary Committee hearing during the impeachment inquiry of President Trump.

Impeached: Notes on the travesty that passed for a trial