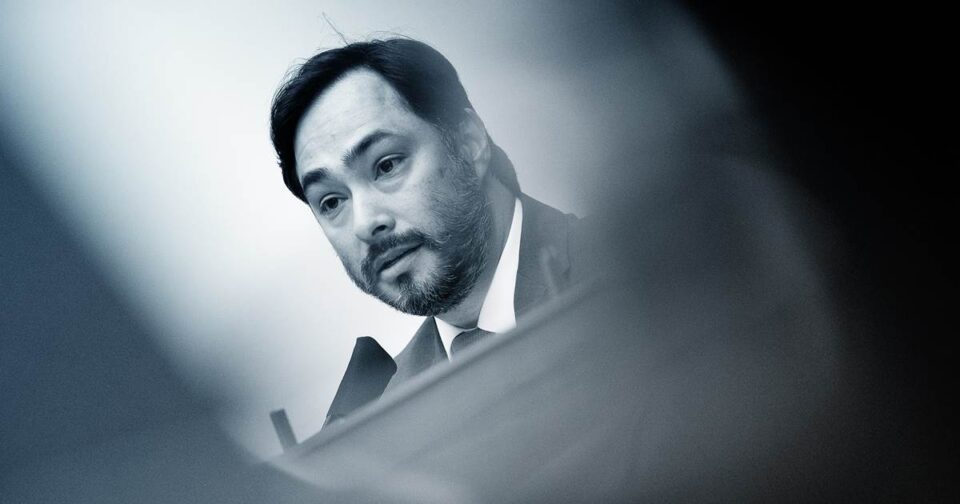 Working in a room near the Senate floor, Rep. Joaquin Castro saw for the first time the graphic video that reconstructed the violent attack on the U.S. Capitol on Jan. 6.

The video included previously unreleased security video woven with separate video the media had broadcast at different points. It showed lawmakers fleeing and hiding as a rampaging mob broke windows and rammed doors as police tried to push back, an officer screaming as he was wedged in a doorway between police and the crowd.

It also showed how close lawmakers got — from senators to Vice President Mike Pence — to coming face to face with a mob that was hunting them down.

“I had seen different clips, but I had not seen the whole video together,” Castro, D-Texas, said in an interview this week. His colleagues were seeing it for the first time, too.

The job was meaningful despite its outcome, Castro said. But he has had little chance to reflect on it, because as soon as he finished prosecuting Trump, he jumped into the chaos of the winter storm that blasted into Texas and cut off electricity and water for many people, including him.

Castro was sworn in for this congressional session on Jan. 3. Three days later, the Capitol was attacked. The impeachment trial began Feb. 9 and ran through Feb. 13.

“We wrapped that up on Saturday evening with the press conference. I flew back home the next day. I think I got home at maybe 4 o’clock in the afternoon, and by 8:30 or 9, the lights were going out,” Castro said. “Getting back home was supposed to be kind of a break, and then we were all dealing with the blackout.”

Castro’s home was without power for 55 hours straight. In the midst of the crisis, he was on the phone with the White House, Texas state and energy officials and his Texas congressional colleagues, trying to help coordinate a disaster response that seemed to be absent.

Days before, he had declared on the Senate floor that Trump had failed to mobilize backup for police officers to protect the Capitol and those in it. Soon after the power losses, Castro was accusing the state’s governor of having failed to prepare for the storm and taken too long to deploy resources to help Texans through the deadly winter storm.

“Greg Abbott and the state leadership failed the people of Texas,” Castro said. “Their poor planning, their lack of preparation and failure to act in an urgent way, led to a lot of suffering and, so far, has resulted in a loss of life in Texas.”

National attention has shifted from the impeachment to the Texas freeze, but Castro’s impeachment work earned him mention in a Politico article as one of its “breakout stars”during the trial.

From the Senate floor, Castro argued that Trump had set the violent attack in motion over months of rhetoric, including when he refused to commit to a peaceful transfer of power, projected a stolen election and called Joe Biden’s victory a fraud.

“He truly made his base believe that the only way he could lose was if the election was rigged,” Castro said. “And senators, all of us, know and all of us understand how dangerous that is for our country. Because the most combustible thing you can do in a democracy is convince people that an election doesn’t count, that their voice and their vote don’t count and that it’s all been stolen — especially if what you’re saying are lies.”

The moment in his arguments that Castro said he hopes Americans remember came at the end of the fourth day of the impeachment trial.

Castro was the last speaker in a day when managers argued that Trump never tried to stop the attack. Castro said then that Trump, the commander-in-chief, did not deploy the National Guard or other law enforcement agencies to help overwhelmed police, despite “multiple pleas to do so.”

“Senators, you have seen all the evidence so far, and this is clear: On Jan. 6, President Trump left everyone in this Capitol for dead,” he said from the floor.

The remark was how Castro had summarized the case to himself, he said.

“In the end, I decided to put it very bluntly to the senators,” he said. “And I think the evidence that was laid out even after that affirms the truth of that statement.”

Castro, who is originally from San Antonio, is the twin brother of 2020 presidential candidate Julián Castro. Both are Harvard Law School graduates. The brothers regularly speak to each other and did so during the trial.

Thank you @JoaquinCastrotx for helping lead the extraordinary prosecution of Trump’s impeachment.

You have made San Antonio, the state of Texas, and our entire nation proud.

Castro, who took a pass on a run against Sen. Ted Cruz, R-Texas, in 2018, sits on the House Intelligence and Foreign Affairs committees.

He was an outspoken Trump critic, in particular in his role as the chair of the Congressional Hispanic Caucus. He led Democrats in passing a joint resolution seeking to overturn Trump’s declaration of a national emergency to build the U.S.-Mexico border wall. The House and the Senate approved the measure, but Trump vetoed it. Biden has terminated the order.

Garcia, the impeachment manager in Trump’s first trial, said Castro consulted her before the second trial. She advised him to consider what he was doing as like an oral argument in a trial, and she said he should be prepared for senators’ questions.

Castro chuckled about the trial’s taking him back to his days in actual courtrooms. He had pulled out a briefcase he usually toted into court in San Antonio, but protocol called for him to walk from the House to the Senate carrying only copies of the impeachment charge.

The attack also has given Americans a view of the inequity of the country’s justice system “and of how much work we have to do,” he said.

He said he is was struck by some who have said authorities were unaware how dangerous the groups and people involved in the Capitol attack could be. That is hard to accept given how the FBI monitored and spied on the group that his mother, Rosie Castro, was involved in during the Mexican American civil rights movement, as well as other activist groups.

“These were groups that were trying to get folks to go vote,” he said. “They never stormed any Capitol with firearms and violently tried to overtake government.”

“We spent millions of dollars on defense, on planes, weaponry, on intelligence-gathering to try to prevent a foreign leader from trying to execute the kind of attack on Jan. 6,” he said. “And yet somehow we were unprepared for groups that are in our own nation to mount the same kind of attack.”

Should Donald Trump be allowed to hold office again? Texas voters are split.