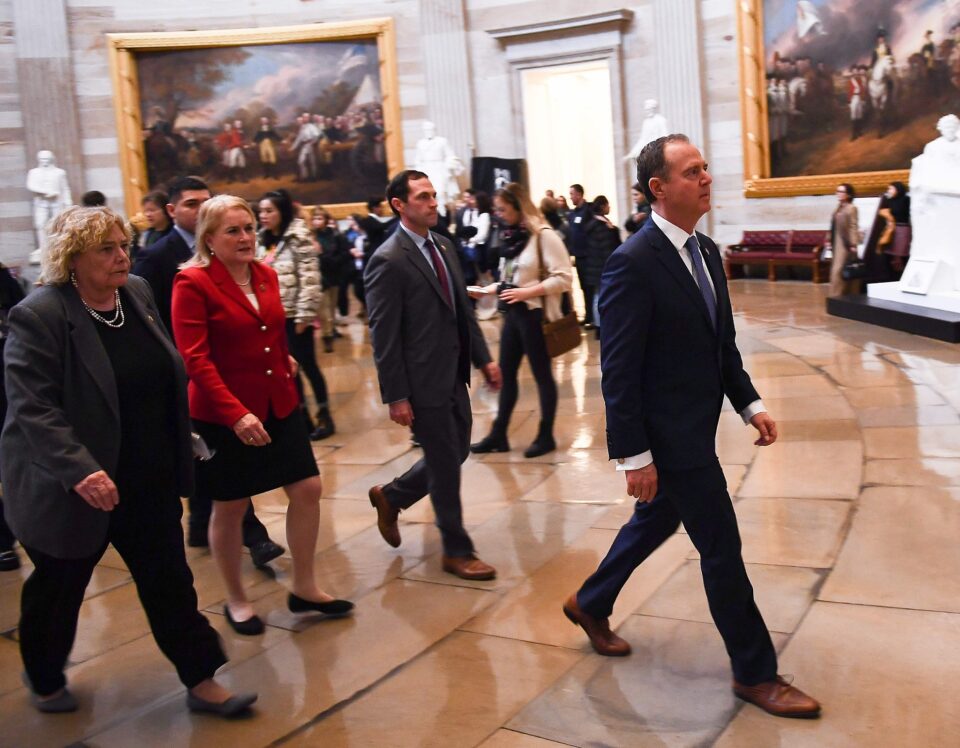 Nearly all the Democratic stars get at least a moment in prime time this week as the party holds its virtual convention. But not everyone.

Rep. Adam Schiff of Burbank, one of the party’s most recognized faces, hasn’t gotten a prime speaking spot. Neither has Florida Rep. Val Demings, who was on the short list to be Joe Biden’s vice presidential nominee, nor New York Rep. Hakeem Jeffries, seen as rising star.

These notable omissions all have something in common: They won rave reviews among Democrats for their prominent roles in the House’s impeachment prosecution of President Trump just seven months ago. Impeaching Trump remained a point of pride for many on the left even after the Senate acquitted him — polling analysis that FiveThirtyEight.com did in February showed that support for it among Democrats remained at a solid 84% after the trial ended.

“They don’t want to remind voters about the impeachment fight — first of all, because they lost,” said Melissa Michelson, a professor of political science at Menlo College. “And because a lot of people felt that impeachment was the wrong thing to do.”

She said Democrats’ “whole shtick Monday is about reaching across the aisle and showing that the Democratic Party is a safe and welcoming place. They don’t want to remind Republicans who are thinking of Biden about this partisan battle that they had with Trump.”

Schiff, who led the House impeachment prosecution team in the Senate trial, won’t be invisible at the convention. He is scheduled to speak to the California delegation Thursday and will continue to be a top surrogate on national media for presidential nominee-to-be Joe Biden and his running mate, California Sen. Kamala Harris.

Still, Schiff’s absence from prime time sidelines one of the party’s top fundraisers, a possible Senate replacement for Harris should the Democrats take the White House, and an electrifying speaker whom even Oklahoma GOP Sen. James Inhofe called “very, very effective” in the impeachment trial.

“Schiff has a lot of upward mobility, but events have shifted since those (impeachment) hearings,” said David McCuan, a professor of political science at Sonoma State University. “Voters seem to have moved past the issue of impeachment, so these speakers don’t capture the moment.”

Demings and Jeffries were both on the impeachment prosecution team, and like Schiff, they’re both seen as having bright futures. Demings has been mentioned as a candidate for the U.S. Senate from Florida in 2022, and Jeffries is among those — along with Schiff — seen as a possible successor to House Speaker Nancy Pelosi of San Francisco when she decides to retire.

For his part, Schiff is taking one for the team. His spokeswoman Emilie Simons said Monday that Schiff “commends the convention team and campaign for pulling off an impressive lineup amid a pandemic and ever-changing circumstances, that reflects the diversity of the country and the strength of the party. Schiff will be doing everything possible in the next few months to elect Joe and Kamala this fall.”

“Schiff’s legacy as a warrior in the impeachment battle still helps him in California,” Michelson said. “Nationally, Biden is worried about winning over the swing states” and doesn’t want to potentially alienate them with speakers who remind them of impeachment.

Also among the missing is Tom Steyer, the billionaire former hedge fund manager and environmental activist. He started Need to Impeach in October 2017 to put pressure on lawmakers to remove Trump from office. Few listened at first — including Pelosi, who is Steyer’s congressional representative.

Ultimately, 8.5 million people signed an online petition, helping to give lawmakers cover to pursue impeachment. Steyer parlayed that campaign into a run for president, but he dropped out shortly after Super Tuesday and endorsed Biden.

“Now, we are looking toward the future and the ballot box,” Steyer told The Chronicle on Monday. “I’m excited to be participating in events throughout the convention to highlight the vice president’s commitment to rebuilding our nation in a way that’s just, green and equitable.”

Steyer will still be involved in the campaign in a way likely to be more powerful than anything he could say on stage this week. NextGen America, a political organization he funds, will spend at least $45 million trying to fire up young voters in 11 battleground states.

“Steyer will still do what he’s going to do, regardless,” McCuan said.

The same goes for Demings. “The (campaign) will use her all around the country, in (battleground states) like Georgia and Florida,” campaigning with Harris or Biden, McCuan said.

“This is like deciding who is on the all-star team,” McCuan said. “You can’t put everyone on there who had a breakout season.”