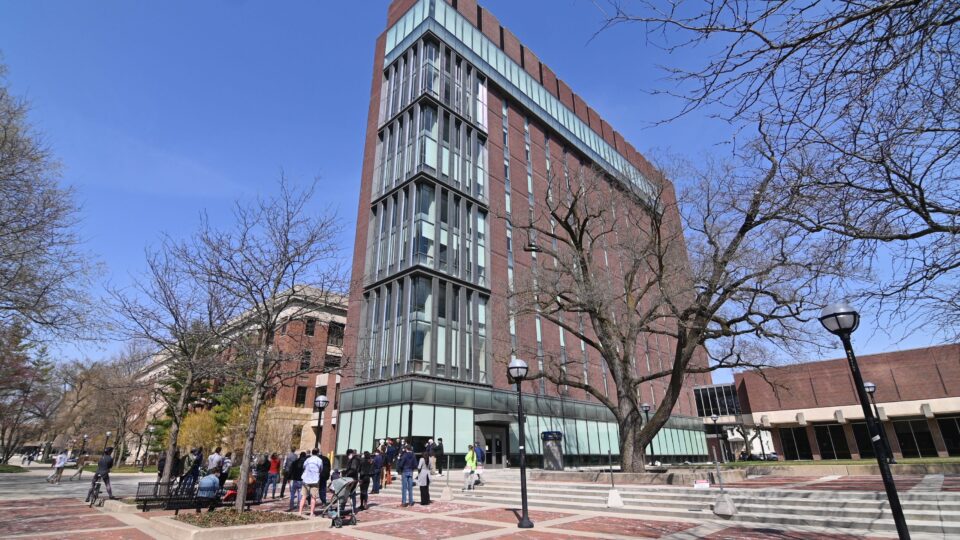 The University of Michigan will not remove the name of a high-profile Republican regent from a school building after he made controversial comments about Democratic and GOP elected officials.

Ron Weiser, who is also the Michigan Republican Party chairman, was criticized in March when he referred to the state’s top three female officials as “witches” and suggested two GOP congressmen should be assassinated for voting to impeach Donald Trump.

Silke-Maria Weineck, professor, German studies and comparative literature, speaks to a crowd gathered at Weiser Hall on the campus of the University of Michigan in Ann Arbor on April 3, 2021. The group held a mock renaming ceremony at Weiser Hall after Michigan GOP Chair and UM Regent Ron Weiser was censored by the UM board over political comments. UM President Mark Schlissel said in a letter on Thursday, June 3, 2021 to the university community that Weiser’s name would remain on the building. (Photo: Max Ortiz, The Detroit News)

UM President Mark Schlissel, responding to a petition to remove Weiser’s name from Weiser Hall, wrote in a Thursday letter to the college community that he vehemently disagreed with the regent’s remarks but didn’t think it merited the removal of his name.

“While I can envision circumstances where the actions of a donor could bring such disrepute to the university that we would consider the abrogation of a gift agreement, I do not think the particular circumstances here reach that level,” wrote Schlissel.

Weiser wasn’t immediately available for comment. Besides being a regent, he is one of the largest donors to the university.

Silke-Maria Weineck, a UM professor of German studies and comparative literature, was disheartened by the decision.

﻿“So we could get out of the gift agreement but we won’t because we don’t think misogyny, political violence and voter suppression are in sufficient conflict with our mission,” she said. “Just an old boy culture asserting its dominance in the face of any threat.“

Schlissel, among other university officials, was openly critical of Weiser’s statements at the time he made them. The university president echoed those feelings in the Thursday letter.

“I share your condemnation of Regent Weiser’s misogynistic and violent comments against elected state officials,” he wrote. “I have expressed publicly our vehement disagreement with his remarks, which do not represent the values or beliefs of the university.”

Weiser was censured by the Board of Regents in early April over comments at an Oakland County Republican forum where he made an apparent reference to Gov. Gretchen Whitmer, Attorney General Dana Nessel and Secretary of State Jocelyn Benson as “three witches” the GOP hopes to burn “at the stake.”

Weiser, the first UM regent to be censured, apologized twice and said his words were poorly chosen in an attempt to fire up the Republican base to defeat Democratic officeholders in the 2022 election.

At the same event, asked how to remove Republican U.S. Reps. Fred Upton of St. Joseph and Peter Meijer of Grand Rapids Township, who voted to impeach Trump, Weiser said, “Ma’am, other than assassination, I have no other way … other than voting out. OK?”

Saying he took a long time mulling the issue and discussing it with faculty, staff and students, Schlissel said he had to weigh a number of issues in making a final decision.

“There are many complex issues at play here, including the intersection of our university values and support for our academic mission,” he said.

Among the issues Schlissel said he considered were the right to freedom of speech and promoting civil discourse, finding common ground with those with who you disagree.

“One of the most challenging aspects of controversies about building names is that individuals’ lives and their legacies are complex and sometimes even contradictory,” he wrote.

Weiser has done a lot of good work, upholding democratic values as the U.S. ambassador to Slovakia and through his work as a philanthropist, Schlissel said.

“Over several decades, he and his family have demonstrated extraordinary support for the academic mission of our university,” he wrote.

His philanthropy has helped the university in funding initiatives ranging from research into democracy and diplomacy to food allergies, diabetes and student support on all three UM campuses, Schlissel said.

Removing the name also involved legal complexities, he said. The name of Weiser Hall was part of a gift agreement, which was made long before Weiser was a regent.

“It is important to all those who enter into agreements with the university that we maintain our reputation for honoring our contracts,” the university president wrote.

“In addition, were we to decide to violate the contract and remove his name from a building, we would be obligated to return the associated gift,” he said.