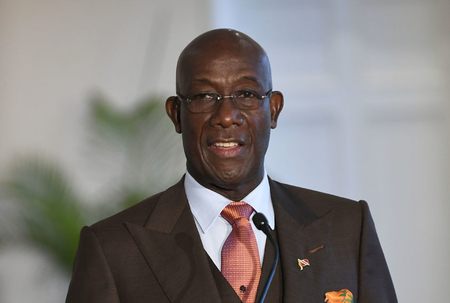 Speaking at a virtual public meeting of the ruling People’s National Movement (PNM) on Tuesday night, Rowley said there are provisions in the Constitution that would allow for the motion to be withdrawn ahead of Thursday’s special meeting of the Electoral College, where the motion will be voted upon.

“I want to say to Mrs Kamla Persad Bissessar, you are a colleague of mine in the Parliament, even if you thought something had gone wrong, enough has been made available to you now and there is provision for the withdrawal of a motion in the Parliament if the mover of the motion is of a changed view and would like to withdraw that motion,” Rowley said.

Opposition legislators of the United National Congress (UNC) want a tribunal established “to investigate the removal of Her Excellency Paula Mae Weekes from the Office of the President”, the order paper circulated for the meeting said.

But Rowley told the public meeting that the opposition legislators are of the view that Thursday’s sitting would be a debate as to whether the President should be removed from office.

“So the entire Parliament, the House and the Senate, will assemble on Thursday morning,” he said. “We know it is to vote on whether the President should be sent down to be determined to be removed from office.

“The Opposition Leader and her imps, pimps, shrimps, all of them think they coming to debate to scandalise the President. They think so. They don’t even know the law. The law makes no provision on Thursday for any debate on the conduct of the President.”

Rowley reiterated earlier appeals for Persad Bissessar to inform the public about the wrongdoing of the Head of State.

“What exactly did the President do that warrants the motion that on Thursday you are meeting there to get the President fired,” he asked.

“Tell us exactly in simple English that John Public could understand because you are disgracing the record of our country and tell us what exactly the President did.

“Because you think so or you thought so or it seems so does not make evidence and even after it has been corrected you still want to persevere.”

The motion to remove the President requires a vote of not less than two-thirds of the total membership of the Electoral College.

The motion appears to have little chance of success with the PNM government holding a comfortable 13-seat majority in the Electoral College.