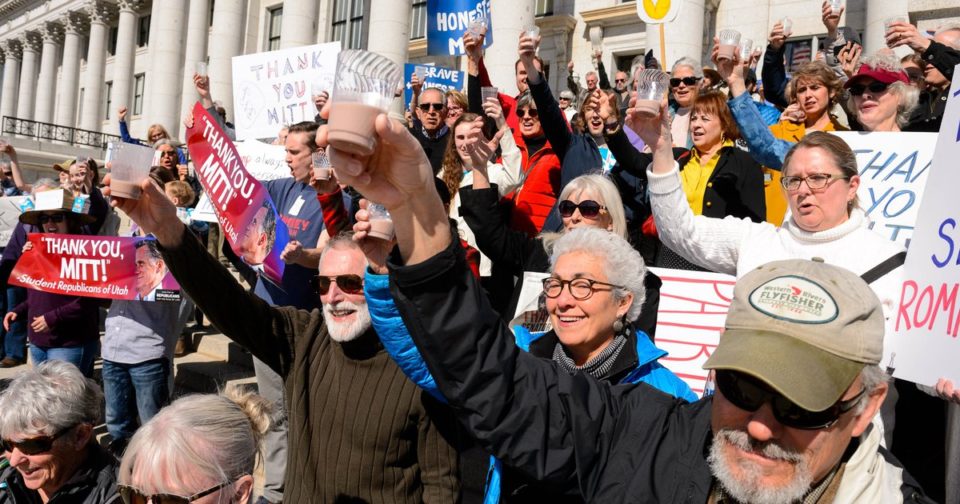 Those signs of strain had all but disappeared when Romney returned to the state Capitol on Friday. In fact, over the course of his 20-minute visit with the House GOP caucus, his vote on impeachment wasn’t even mentioned.

“My own view is that the people in our state disagree on many issues, but we tend not to be disagreeable,” he told reporters after meeting with Senate and House lawmakers.

It certainly seemed like that Friday, when the only public displays of emotion toward Romney were positive. Supporters rallied for him on the Capitol steps and toasted him with glasses of chocolate milk, the senator’s beverage of choice during the impeachment hearings. When Senate and House Democrats on separate occasions thanked Romney for his vote, the room broke into applause both times.

Romney took the appreciation in stride, reiterating that he’d vowed to act as an impartial juror and took no pleasure in breaking with the rest of his Republican Senate colleagues but concluded the president had committed a severe violation of his oath.

“I would’ve done the same thing had it been a president I loved like Ronald Reagan or George W. Bush or a Democrat,” Romney told House Democrats. “I mean, that was not the consideration.”

Outside the capitol, Mormon Women for an Ethical Government, Alliance for a Better Utah and several other groups held their rally honoring Romney for “courage displayed throughout the presidential impeachment process.”

“Mitt’s my super-hero,” read one sign carried by a young boy in Superman garb.

Romney’s conversation with House GOP lawmakers largely stayed away from politics, although he did predict that Trump would win reelection, especially if the Democrats choose Bernie Sanders as their nominee.

Romney said, over the years, presidential administrations of both parties have done a poor job of stockpiling medical supplies to handle a pandemic.

“If we were to have the games here, and something like this were to happen, who’s going to pick up the $1 billion tab?” he asked. “I’m sure hopeful we get the Olympics back again in Utah. I think we will. But … we need to think about what the financial backstop would be in the event of an outbreak of some kind.”

His top concerns at a national level are the growing federal debt, China’s emergence as an economic competitor to the United States and climate change, he told state lawmakers.

Asked by reporters if he’d heard from Utahns upset about his impeachment vote, Romney said he knew some people supported the decision and others opposed it. And he said he doesn’t pay much attention to any social media outrage aimed in his direction.

Meanwhile, in the state Legislature, a San Juan County representative’s resolution to censure Romney appears dead on arrival, along with a bill that sought to create a recall option for U.S. senators representing Utah. In place of those charged proposals, House and Senate leaders last week quietly shipped off a citation honoring Trump and commending the president for his work in Utah and across the nation.