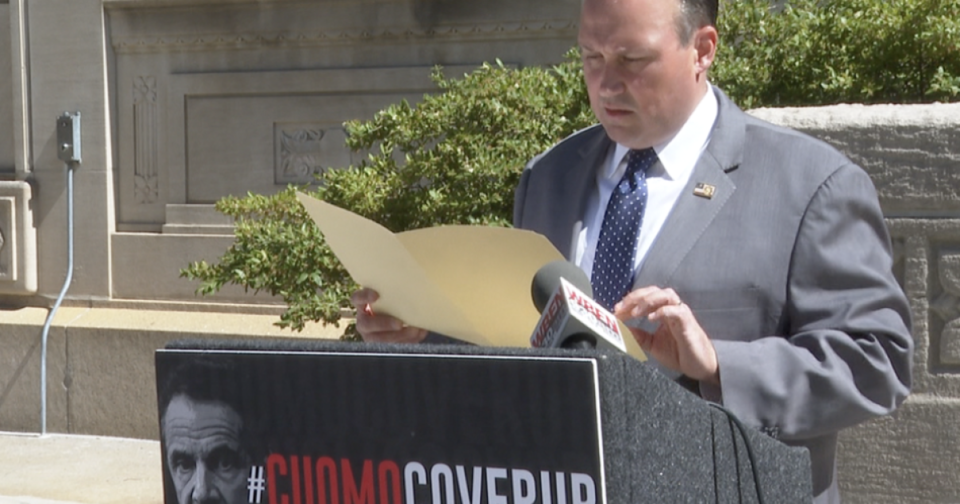 “Why wouldn’t they insist on having a business meeting at their office?,” questioned New York State Republican Party Chairman Nick Langworthy.

Both sit on the Assembly Judiciary Committee which is tasked with handling Cuomo’s impeachment investigation over how he handled COVID-19 nursing home deaths at the peak of the pandemic.

“They sat there and had a lovely evening with the governor someone they are supposed to be investigating right now,” said Langworthy.

According to Assemblywoman Karen McMahon, the purpose of the dinner was for the western New York delegation—including other assembly members and senators to discuss and capitalize on what is expected to be a massive infrastructure bill from the Biden administration.

“The remarks made this morning by GOP Chairman Nick Langworthy were nothing less than a shameless attempt to conjure up a political controversy where none exists,” she said in a statement. “Earlier this month, the WNY legislative delegation of Assembly Members and Senators was invited to the Governor’s Mansion for a dinner meeting to discuss how to allocate billions of dollars of anticipated infrastructure funding for projects in Western New York. I attended that meeting, along with the others, to ensure that the residents of Amherst and Pendleton, my constituents, had a voice in those discussions.

“I was together with other members of the WNY delegation at all times. At no time was there any mention whatsoever of my membership on the Judiciary Committee or of the impeachment investigation.

“Party boss Nick Langworthy’s allegations of impropriety are baseless political nonsense. There is nothing improper about my attending a meeting with other members of the Western New York delegation to discuss critical infrastructure needs and ensure my community has a seat at the table. My job is to advocate for my community, and I was doing just that. Absenting myself from this important meeting would have left my community without a say in how billions of infrastructure dollars might be spent. I’m not interested in playing politics; I’m interested in delivering vital resources for my constituents,” Wallace said in a statement.

Langworthy said both should step-down from their roles on the committee.

Bob Good (VA-5) Votes Against Honoring Capitol Police with Congressional Medal of Honor. They Protected Him During Jan. 6 Insurrection.