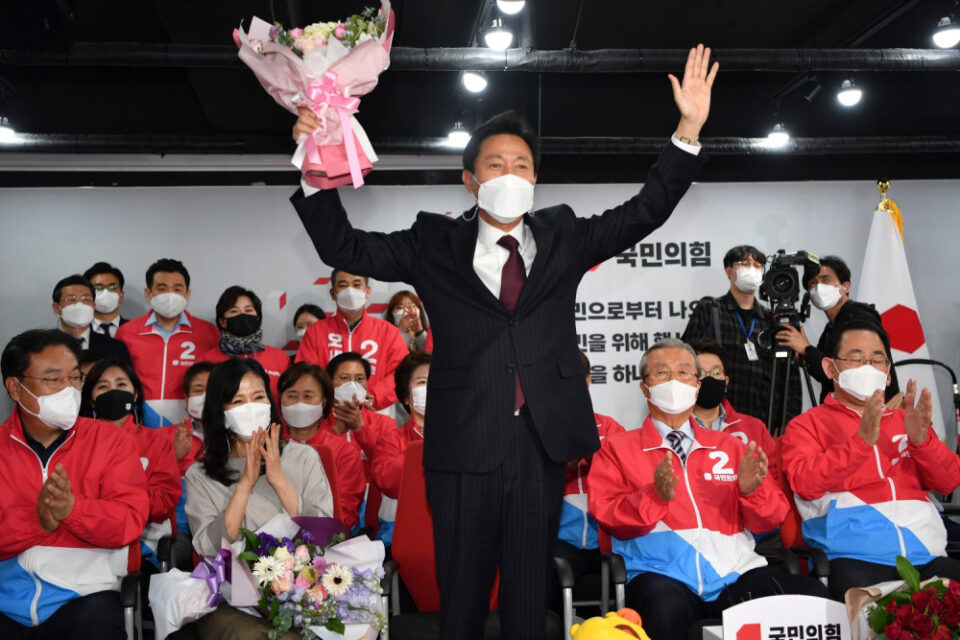 After losing four national elections in a row since 2016, South Korea’s conservatives finally scored a major victory earlier this month: sweeping the by-elections for mayoral seats in South Korea’s two largest cities, Seoul and Busan, which together are home to a quarter of South Korea’s population. While the People Power Party, the main conservative opposition, was expected to win in Busan, the its Seoul mayor candidate Oh Se-hoon came from behind to defeat the ruling Democratic Party’s Park Young-sun in a staggering landslide, 57.5 percent to 39.2 percent. Oh carried all 25 districts of Seoul, including Park’s own Guro-gu.

The Seoul by-election has been widely seen as a referendum on the liberal Moon Jae-in administration, with potential implications for South Korea’s presidential election in 2022. While that analysis is true to a degree, it’s too narrow a focus. The Seoul mayoral by-election is an expression of a political trend that has been developing since the impeachment of conservative President Park Geun-hye in 2016-2017, in which conservatives have gradually regained their footing while liberals slowly leaked support. While South Korea’s liberals still maintain the upper hand, they now face a considerably smaller margin of error.

South Korea’s Democrats lost Seoul in the way Mike Campbell in Ernest Hemingway’s The Sun Also Rises went bankrupt: “Gradually, and then suddenly.” In 2016, leading up to Park’s impeachment, neither side was popular: The main conservative party (at the time called the Saenuri Party) had an approval rating in the high 30 percent range, while the main liberal opposition Democratic Party’s approval rating was only in the high 20s.

According to Jeong Han-wool at Hankook Research, this composition changed dramatically in the months leading up to the president’s impeachment: Conservative support fell off a cliff, as two-thirds of the conservatives withdrew their support, leaving Saenuri Party support at around 10 percent. Meanwhile, the Democratic Party’s support surged up to the high 40s and low 50s, and stayed at that level through 2018—when the Democratic Party swept the conservatives in the local elections that chose governors and mayors.

Between 2020 and 2021, conservatives continued to narrow the gap, while the landslide win in the 2020 election lulled the liberals into complacency. The goodwill earned through the Moon administration’s achievements, such as leading the impeachment effort in 2017, improving relations with North Korea in 2018, and successfully combating COVID-19 in 2020, began to fade.

With the newly established supermajority, the Democratic Party focused most of its political energy on prosecution reform—arguably a necessary step to rein in the Supreme Prosecutors’ Office, which routinely abused its investigative authority to interfere with politics, but not an issue that made a noticeable impact on the everyday lives of the public. Meanwhile, key demographics that served as a bedrock for liberals were slowly eroding. Women in their 20s used to support the Democrats by a 2-to-1 margin, but the sexual harassment scandals that ended the tenures of the Seoul Mayor Park Won-soon and Busan Mayor Oh Keo-don, both Democrats, drained their support. In the Seoul by-election, exit polls indicated that 15 percent of women in their 20s voted for a third-party candidate, leaving the Democratic candidate Park Young-sun with only 44 percent support among that group.

Even more astounding is the erosion in the support of men in their 20s. Although in most countries young people are presumed to lean liberal, Jeong noted that the Democrats had in fact leaking support from men in their 20s since 2010. In his 2019 book titled Men in Their 20s, co-written with the South Korean journalist Cheon Gwan-yul, Jeong hinted at the potential reasons why. Jeong and Cheon noted that South Korean men in their 20s did not turn conservative in a sense that they preferred the free market, opposed the expansion of the welfare system, or disapproved the impeachment of Park Geun-hye.

According to Jeong’s survey, which asked a battery of questions on social and political issues, the issue that activated the men in their 20s the most was an aggressive hatred for feminism, as nearly 60 percent of South Korean men in their 20s (58.6 percent) said they strongly opposed feminism. What is more, 25.9 percent opposed feminism with such off-the-chart vitriol (scoring -12 out of a scale that ranged from -12 to 12) that Jeong and Cheon termed them an “identity group”—that is, a group whose political identity is centered on misogyny.

The Moon administration has been losing support from this demographic, as young men see the liberal government as feminist, pointing to the administration’s measures for gender equality while (wrongly) arguing that their female peers do not experience any discrimination. In the by-election for Seoul mayor, exit polls indicated that staggering 72.5 percent of men in their 20s voted for the conservative candidate Oh—even more than male voters who are 60 years old and older.

After gradually losing support in Seoul, the Democrats lost it suddenly. Even as recently as late February—approximately a month and a half before the by-election—the liberal candidate Park was leading Oh. A poll-of-polls conducted by MBC News showed that on Feb. 14, Park had a strong lead over Oh, 59.8 percent to 40.2 percent. Park’s lead eroded over the next several days, then evaporated completely in early March when the so-called LH scandal broke. LH, whose formal name is Korea Land & Housing Corporation, is a government-owned corporation responsible for management of public lands and development of housing projects. On March 2, two major civic groups revealed that LH employees used insider information to speculate on real estate.

Even at the peak of its popularity, the Moon administration was struggling with the political implications of Seoul’s soaring real estate prices, which angered every demographic—young voters because they could no longer afford housing, and older voters because the increase in their home values meant a higher property tax bill. The LH scandal poured gasoline over that fire, as the bureaucrats under the Moon administration were profiting off a red-hot real estate market that the public felt was damaging to their aspirations and their pocketbooks. MBC’s poll-of-polls shows Oh decisively taking the lead by March 4, and he continued to build his lead for the next month to win in a landslide.

The conservatives also played their part. Oh was not a perfect candidate: the former Seoul mayor carried baggage from his time in City Hall, which ended in 2011 in an embarrassing fashion as he resigned after attempting to block the city ordinance that provided free lunch to schoolchildren. He faced credible allegations of self-dealing real estate transactions (which he denied initially, then backtracked after multiple eyewitnesses came forward), and he was caught up in racist and homophobic incidents.

Yet Oh and the conservatives could brush these problems aside because they avoided making more significant mistakes. Kim Chong-in, the leader of the People Power Party, endeavored for years to marginalize the far-right elements within his party that vociferously supported the impeached Park, and he succeeded in making them a muted presence during the by-elections. The conservatives also united the opposition by conducting an ad hoc primary with the third-party opposition candidate Ahn Cheol-soo, avoiding a three-way election that would have split the conservative vote. These efforts went a long way toward bringing back South Korea’s conservatives from the brink.

But one conservative victory in five years does not mean the winds have permanently changed. Historically, a local election held toward the end of a president’s term has always been a challenge for the ruling party; indeed, the relevant data point may be that Park Young-sun held a strong lead close to the election despite having nothing but headwinds against her campaign. Nor was it realistic to assume that South Korea’s liberals could have banked all of their newfound gains since Park Geun-hye’s impeachment into durable, long-lasting support; some level of re-balancing was bound to happen as time passes and new political issues take center stage.

Just as the Democrats’ landslide victory in the 2020 legislative election masked the erosion of liberal support, the conservatives’ landslide victory in the 2021 by-elections masks the fact that they did not recover all of their pre-impeachment base. Jeong estimated that conservatives are still stuck at baseline support in the high 20 percent range, while the liberals maintain a slight edge in the low 30s. This is a reversal from the pre-impeachment era, when conservatives reliably had a head start thanks to their higher baseline support. South Korea’s conservatives may well win again, but to do so, they will have to cover a longer distance than the liberals.