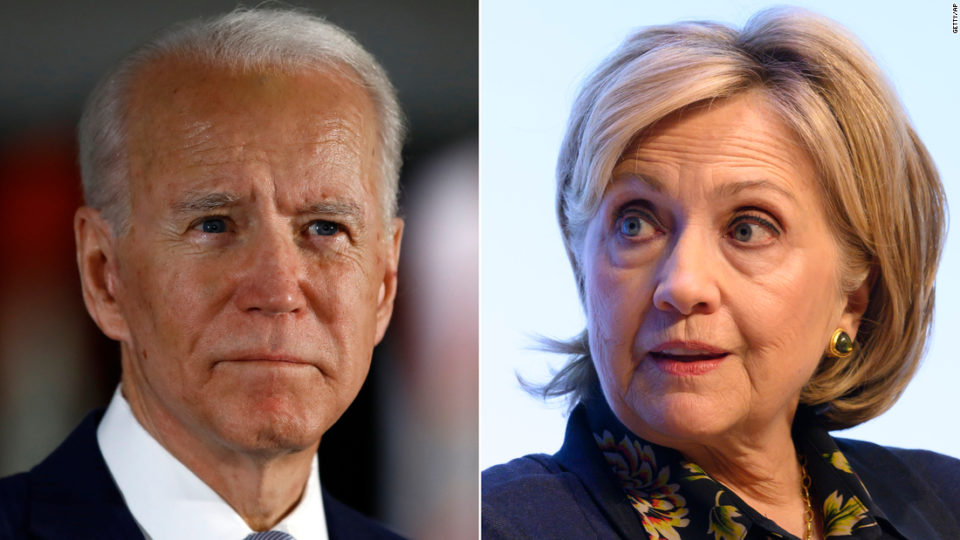 It’s hard to compare exactly why one candidate can win and another will lose in two different elections, but it’s perhaps worth noting what sets Clinton and Biden apart and guess about whether that would make Biden stronger against President Donald Trump in November than Clinton turned out to be.

There’s one obvious difference between them: Biden isn’t a woman.

But men also swung from Sanders to Biden. They went 55% for Sanders over 44% for Clinton in 2016. This year Biden and Sanders split them about evenly. The exit polls don’t tell us why.

Here are some other similarities and differences.

They’re both tied to Barack Obama

Running against Obama — Clinton went much farther than Biden when they both ran against Obama in the 2008 Democratic primary. Biden, who was on his second run, dropped out after Iowa and Clinton, who was in her first, stayed in it much longer, until June 3, when the last primaries took place.

Working for Obama — Both of them went to work for Obama, Biden as vice president and Clinton as secretary of state. Biden was Obama’s sidekick. He cornered Obama into backing same-sex marriage. He said Obamacare was a big effing deal. Clinton was the focus of conspiracy theories throughout her time in the Obama administration, perhaps because she had been drawing the enmity of Republicans for decades and perhaps because she was seen, from the outset, as Obama’s natural heir even if Biden was his vice president.

Running to follow Obama — Clinton came right after Obama. She pushed an inevitability vibe and only really faced Sanders. She was set up to be the first woman president following the first black president. Biden, who was older and had already run for president twice, deferred to her. But she struggled against Sanders and, despite promising apocalypse if Trump won, lost to him too.

They were both Washington fixtures for decades

Clinton’s time as First Lady shaped her public image — Around the time Biden was being sworn into the Senate, Clinton was working on the the Watergate committee as a young staffer. But she didn’t become a household name until her husband, Bill Clinton, then the governor of Arkansas, ran in a fractious field in 1992. He was the “Comeback Kid,” whose career-minded wife stood by him as he battled allegations of infidelity and, later, worse. Her efforts to reform the health system were foiled. Travelgate. Whitewater. The vast right-wing conspiracy. She has been a magnet for conservative conspiracists ever since.

She also became a Twitter meme as secretary of state, admired by a younger generation of women.

Biden toiled in the Senate after tragedy — He has been in Washington since 1973, taking office after a personal tragedy and riding the train home to see his boys at night. He’s the longtime senator from Delaware who chaired the Judiciary Committee and the Foreign Relations Committee and enacted major pieces of legislation. He made friends with Republican senators, some of whom he still praises even though maybe he shouldn’t.

To be sure, Biden is now at the center of conservative conspiracy theories, but it’s also true that he’s relatively new as a target. Trump’s attempts to pressure Ukraine to investigate Biden his son Hunter were at the center of the President’s impeachment trial. Trump and his allies have repeatedly made unfounded and false claims to allege that the Bidens acted corruptly in Ukraine.

They ran in very different fields

Clinton only ever really faced Sanders — Yes, Martin O’Malley was in the race. And so were a handful of others. But Sanders was the progressive alternative to Clinton’s juggernaut that year. It’s becoming clear that a good portion of his 2016 support was simply anti-her.

Biden faced a huge field — Yes, he was the early frontrunner, but Biden also faced scrutiny from many more sources. More than 20 Democrats were in the presidential race at one point and Biden, despite not winning in either Iowa or New Hampshire, survived to romp in South Carolina and then on Super Tuesday. The party coalesced around him instead of making a binary choice between Clinton and Sanders.

They ran in very different years

Trump didn’t seem possible in 2016 — Both the Clinton and Trump campaigns thought leading up to Election Day that she would win. She warned that it was her or the apocalypse.

Now Trump is President — But Clinton’s apocalypse came to be. And much of Biden’s strength, in exit polling, has to do with the perception that he is viewed as the candidate best equipped to take on Trump even if Sanders shares more policy priorities with much of the Democratic base.

They have very different favorable ratings

The Danger of Democrats’ Distorting Legal Arguments Against Impeachment