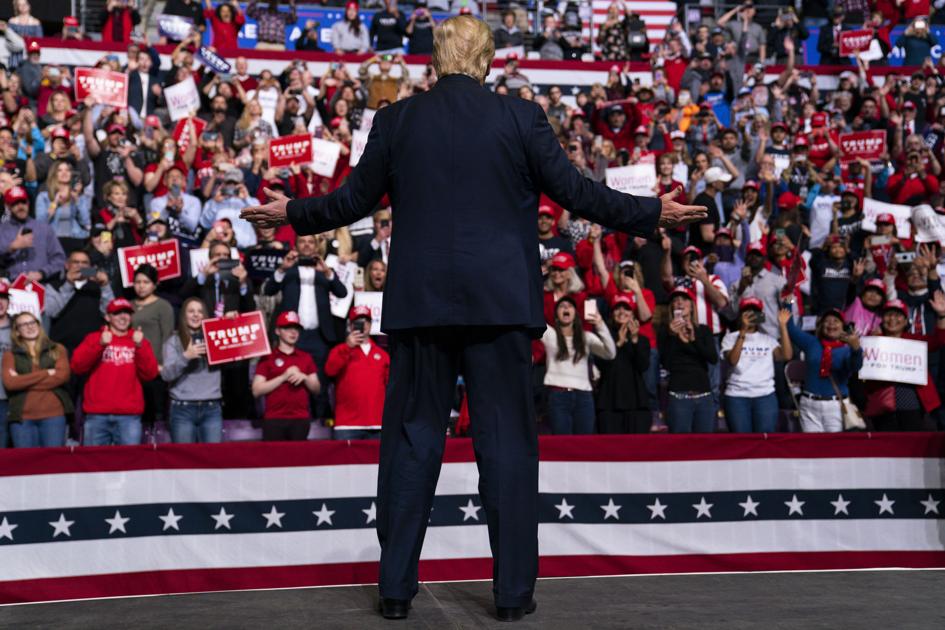 Donald Trump was so certain he was going to lose the 2016 presidential race he claimed the election was rigged, but his paranoia this time around is frightening even fellow Republicans.

This is a guy who floated the possibility of delaying the Nov. 3 election, all the while claiming that mail ballots are bad and absentee ballots are good.

Election officials will tell you absentee and mail ballots are one and the same. So many Coloradans used to request absentee ballots for the general election that the Legislature in 2013 voted to become a mail-ballot state, automatically mailing ballots to active voters.

Trump never mentioned mail ballots during his 2016 rants about election fraud, but with more states turning to them as a way to ensure voter safety during the pandemic, he is attacking mail ballots with the same fervor he uses to go after the media.

“With universal mail-in voting (not absentee voting, which is good), 2020 will be the most INACCURATE & FRAUDULENT election in history. It will be a great embarrassment to the USA. Delay the election until people can properly, securely and safely vote???” Trump tweeted on July 30.

Among those who rejected Trump’s idea was law professor Steven Calabresi, a co-founder of the Federalist Society, a powerful group of conservative lawyers.

“I have voted Republican in every presidential election since 1980, including voting for Donald Trump in 2016. I wrote op-eds and a law review article protesting what I believe was an unconstitutional investigation by Robert Mueller. I also wrote an op-ed opposing President Trump’s impeachment,” Calabresi wrote in The New York Times.

“But I am frankly appalled by the president’s recent tweet seeking to postpone the November election. Until recently, I had taken as a political hyperbole the Democrats’ assertion that President Trump is a fascist. But this latest tweet is fascistic and is itself grounds for the president’s immediate impeachment again by the House of Representatives.”

U.S. Sen. Cory Gardner of Colorado, a Republican who faces a tough reelection bid this year because of Trump, issued a blistering statement:

“Our country has voted in turbulent times before, including two world wars, and a global pandemic. Congress has the power to set the election date. Americans are going to vote on November 3 come hell or high water.”

Mario Nicolais, a former Republican who switched his registration status to unaffiliated, also ripped Trump in his column in The Colorado Sun.

“Trump does not care that his scorched-earth approach will leave the burnt husks of Republican candidates strewn across the country,” Nicolais wrote. “He does not care that he will be handing Joe Biden not only a victory, but also a Democratically controlled U.S. House and U.S. Senate.”

Pam Anderson, the executive director of the Colorado County Clerks Association, took on Trump in June, tweeting, “It is beyond disturbing for election officials to see dis/misinformation from the highest office in the land.”

The media picked up on her tweets because she pointed out she is a Republican and a former county clerk who handled mail ballots.

Four years ago, a number of 2016 polls showed Democrat Hillary Clinton was going to beat Trump, which he found so inexplicable that he had to come up with voter fraud as the reason why.

“Of course there is large scale voter fraud happening on and before Election Day. Why do Republican leaders deny what is going on? So naive!” Trump tweeted on Oct. 17, 2016, the day before his rally in Colorado Springs.

The day before he tweeted, “The election is absolutely being rigged by the dishonest and distorted media pushing Crooked Hillary — but also at many polling places — SAD.”

I worked as the spokeswoman for Republican Secretary of State Wayne Williams in 2016 when Trump made his claims about voter fraud. When the Colorado press asked me about his tweets, I wasn’t buying it.

I mocked Trump’s claims in a statement that reporter Ernest Luning with Colorado Politics said “blew up on social media.”

“Donald Trump has been tweeting about elections being rigged, but he offers no evidence of such,” was my response. “I can say on Twitter I’m a supermodel but that doesn’t make it so.”

I also pointed out that Trump never mentioned election fraud as he was winning one primary election after another.

Think about it: If it were really that easy to rig elections, how did Williams, viewed by many as one of the top secretaries of state in the nation, lose in 2018? How did Secretary of State Bernie Beuscher lose in 2010 to Republican Scott Gessler? How did Gessler in 2014 come in third in the GOP primary for governor?

Couldn’t they have flipped some switches, hidden some ballots, slipped some in, asked sympathetic clerks to jimmy the system, you ask?

Of course, election fraud does happen. The most well-known case in Colorado in 2016 occurred when the former state Republican Party chairman, Steve Curtis, filled out his ex-wife’s ballot. His attorney blamed Curtis’ diabetes, which I guess is the modern version of the Twinkie defense.

Democrats rightly had a field day, as Curtis had said in an interview before the election, “It seems to be, and correct me if I’m wrong here, but virtually every case of voter fraud I can remember in my lifetime was committed by Democrats.”

Despite all his predictions, Trump won the 2016 election because he won the Electoral College. Clinton won the popular vote, so Trump continued to complain of election fraud, although he talked about polling places, not mail ballots.

But Trump’s claims are having an impact in the Centennial State. Before the June primary, some county clerks found themselves answering questions about the security of mail ballots, although Coloradans began using them for off-year elections in the 1990s.

Our system is safe, in part because of the many safeguards, such as bipartisan teams of judges checking signatures and a post-election audit to make sure the way a voter marked a ballot is the way it was recorded.

Trump’s then-secretary of Homeland Security, Kirstjen Nielsen, praised Colorado as a national leader in safeguarding elections when she visited in 2018.

“We’d love to continue to use you as an example of what other states can adopt,” she said.

That sounds like an endorsement of mail ballots to me. But Donald Trump doesn’t see it that way.