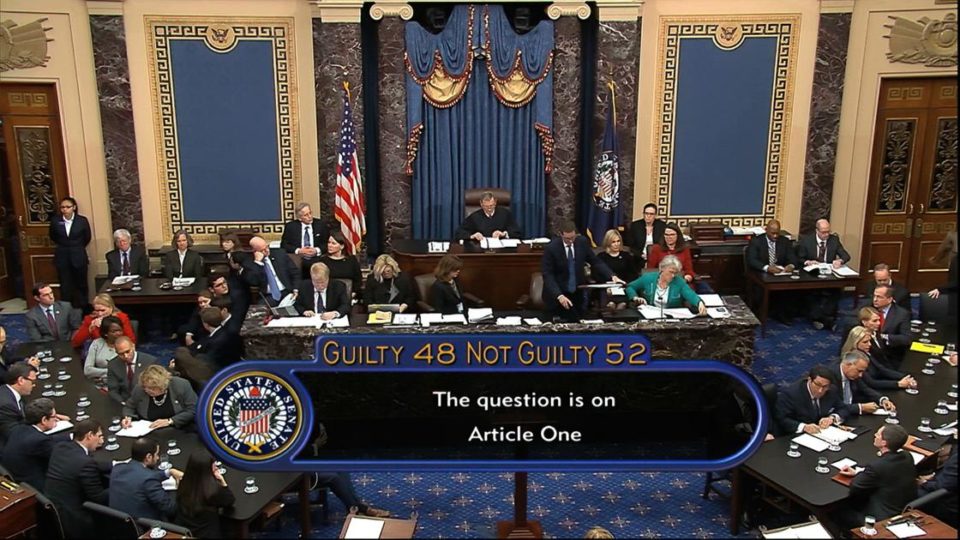 Sen. Chuck Schumer and his fellow Democrats in both houses of Congress would have the world believe that President Donald Trump will be forever guilty because he was “impeached.”

As usual, he is in error. Impeachment, by definition, is only a “charge” or a “challenge,” a temporary or transient state that must then be sustained.

To the great disappointment and consternation of Democrats, the Senate acquitted (found “not guilty”) the president of any wrongdoing.

This was determined by the hopeless, yet painfully protracted, congressional impeachment proceeding.

There is no historical significance for Schumer to gloat about.

This is not a matter of semantics. This is a statement of fact. Just as a prosecutor may indict someone, once a jury finds him “not guilty,” he is no longer under indictment; he is free of the charge, just as the president is free from the impeachment.

Presidents Andrew Johnson, Bill Clinton and Trump could not be re-charged on the same facts because each has been exonerated by the Senate, the only body that has the authority to pronounce guilt under this section of the Constitution.

Will even commented on lesser candidates such as Deval Patrick (0.43%) and Michael Bloomberg (0.03%).

Noticeably absent was any mention of Pete Buttigieg, who finished second with 24.43% of the vote, a virtual tie with Sanders.

I was certainly disappointed with the omission as it left out an important dynamic when analyzing the field.

A Feb. 16 Post and Courier letter to the editor advised that there are three reasons to honk your horn in traffic. Well, I have a few more that I think most will agree with.

The driver stopped at the light in front of you with his right-turn blinker on who apparently is unaware that you can take a right on red after you stop. BEEP!

How about the driver focused on her phone, stereo, makeup, reflection, etc., who doesn’t notice the light has changed to green? BEEP!

Drivers who stop at least 10 car lengths behind the one stopped in front of them. Apparently, it never crosses their minds there is a long line of people behind them who would like to make it through the green light, not to mention the drivers trying to enter from side streets. BEEP!

Here’s a situation that always gets my adrenalin pumping. An oncoming truck driver swerving in and out of my lane until he’s maybe 50 yards away. BEEP!

Backing out of a parking spot can be dangerous for pedestrians behind you. This is where drivers can alert you. BEEP!

Get a weekly recap of South Carolina opinion and analysis from The Post and Courier in your inbox on Monday evenings.

Don’t forget the person, phone in hand, getting ready to step into traffic and you’re the only one who can see the danger. BEEP!

So keep your eyes and ears open.

Bag ban impacts us all

I hate litter and want to protect the environment and wildlife, but I’m not sure Rep. Joe Cunningham thought through the ripple effects of a plastic bag ban as he pushes to eliminate plastic utensils and other plastics.

I reuse plastic bags a great deal, but the loss affects me most because I use two bags to cover my paint cup instead of rinsing it out every day. Some bags are good for a year. This is convenient and helps the environment, right? A neighbor covers her paint roller for two weeks.

I talked to a lady who uses plastic bags to pick up after her two large rescue dogs because regular poop bag rolls are not big enough. How will this ban affect the adoption of large dogs?

Some parents worry about packages of raw chicken leaking through paper bags in their cars and homes where children may drop toys, snacks and crayons into bacteria-laden fluids.

Are we to eat to-go salads with pencils?

Beaches should be clean and wildlife protected, but we should try better educating people with more signs and have trash cans with better lids.

I’ll bet there are amazing ideas for reusing plastic bags. But this ban punishes us all.

I see the South Carolina tea party is encouraging its followers to vote for Bernie Sanders in the Democratic primary.

I guess all is fair in love and politics.

Of course, the tea party is the group that sowed the seeds of divide in this country and caused gridlock in Congress with its “our way is the only way” demands.

It would be ironic if its latest directive helped elect a Democratic socialist as president.