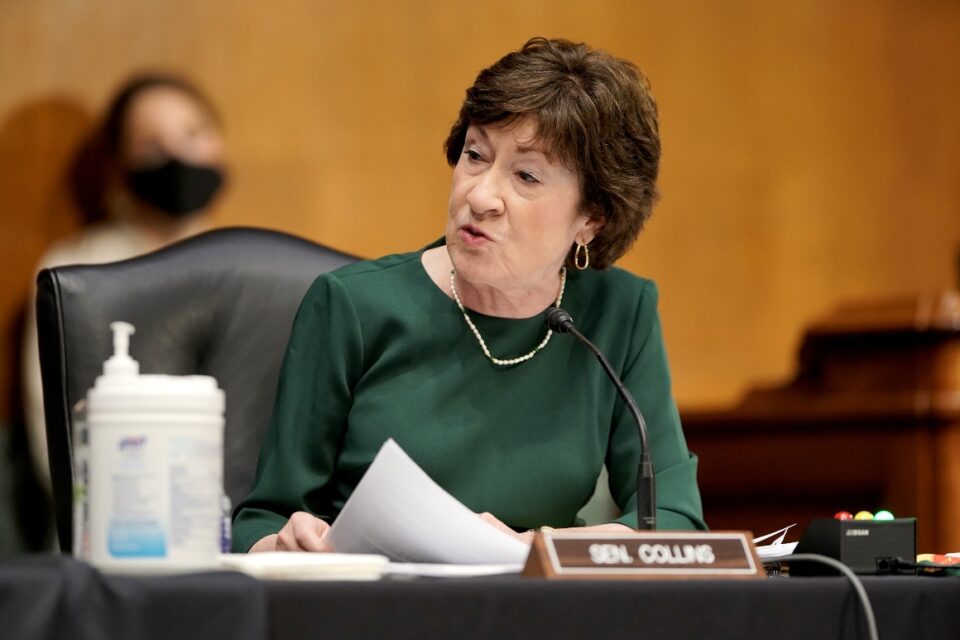 “I tend to focus on policy, not personalities. And I made my [impeachment] decision very clear by giving a long floor speech explaining it. And it’s time to move on to the challenges we’re facing,” Collins said. “Let’s move on.”

Getting past Trump and 2020 hasn’t come easily for Cheney. But as much as her fellow Republicans who crossed the former president would prefer to keep their focus on Biden, some recognize that their silence runs the risk of ceding Trump more power. Sen. Bill Cassidy (R-La.), who voted to convict, said his House colleagues’ Wednesday vote to evict Cheney is “going to be perceived as President Trump dictating what the House does.”

Cheney stands nearly alone in her willingness to sacrifice her leadership spot to call out Trump’s false claims that he won the election, demonstrating how strong his sway remains over the GOP. House Minority Leader Kevin McCarthy, while initially critical of Trump’s role in the Jan. 6 riots, has since worked hard to get back in the former president’s good graces.

The party’s top two Senate leaders, Minority Leader Mitch McConnell (R-Ky.) and Minority Whip John Thune (R-S.D.), have basically stopped talking about Trump after taking a more confrontational stance toward him in the wake of the insurrection. Asked about Trump on Tuesday, Thune said only that “I don’t think re-litigating the 2020 election is a winning strategy.”

Across the Capitol, however, Cheney hasn’t been afraid to speak her mind about Trump in interviews, op-eds and leadership press conferences — including at last month’s GOP policy retreat in Orlando. A gathering supposedly centered around party unity ended up kickstarting the campaign to push her out of power.

Her biggest ally among the other 16 Republicans is Illinois Rep. Adam Kinzinger, an Air Force veteran who wears his impeachment vote like a badge of honor and constantly needles Trump and McCarthy on Twitter. Kinzinger launched an entire PAC dedicated to targeting the pro-Trump wing of his party and protecting fellow Republicans who voted to impeach. He even put together a “Rally for Liz” fundraiser ahead of Wednesday’s ouster vote.

The House’s pro-impeachment Republicans initially kept in constant contact, and nine of them banded together to criticize Speaker Nancy Pelosi as hypocritical for supporting a challenge to a contested Iowa House race. There was talk among them of teaming up on issues in the future if another opportunity presented itself.

Rep. Jaime Herrera Beutler (R-Wash.) is back to keeping her usual low profile after nearly getting hauled before the Senate as an impeachment witness. Newly elected Republicans in swing seats, such as Rep. David Valadao of California and Peter Meijer of Michigan, are staying low-key after their impeachment votes.

Rep. John Katko told local reporters he will “absolutely support” fellow New York Rep. Elise Stefanik for GOP conference chair if Cheney is removed, though he considers the Wyoming Republican a “friend.” And Rep. Tom Rice, who represents a pro-Trump district in South Carolina, has privately vented about Cheney to his colleagues, according to GOP sources.

“I’m just going to go to the meeting with an open mind and listen to what happens,” said pro-impeachment Rep. Dan Newhouse (R-Wash.) when asked if he would support Cheney on Wednesday. She ultimately got ousted from the conference chairmanship in a quick voice vote.

Rep. Anthony Gonzalez (R-Ohio) — who was recently censured by his state’s GOP for his impeachment vote and is already facing a Trump-endorsed primary challenger — is another of the few party voices to come to Cheney’s defense in recent days.

But mostly, Kinzinger and Cheney are on a lonely island in the congressional GOP. The other Republicans who backed impeachment generally opt to keep their heads down, reluctant to make their votes against Trump part of their political brands — especially as they see calls for censure and pro-Trump primary challenges pile up in their districts.

The defense of Cheney is as porous in the Senate as in the House, though Sen. Joni Ernst (R-Iowa) likened silencing Cheney to “cancel culture” and she has a handful of defenders. McConnell, who supports Cheney’s re-election in Wyoming, has repeatedly dodged questions about her.

Collins called Cheney a “woman of strength and character and did what she thought was right” and said she hoped the GOP will accommodate “people with varying views on President Trump.” Sen. Mitt Romney (R-Utah), who twice supported Trump’s impeachment, said he’s felt some compulsion to stick his neck out for her and worries about the message Wednesday’s move will send.

“It’s important for us to stand up for people who are honorable, capable people,” Romney said in an interview. “If we want to attract more people to the party, that’s not going to work if we kick people out of leadership because we disagree with them.”

What happens when you get Washington’s four most powerful lawmakers in the same room with the president? Not much.

Some Republicans even argue that Cheney’s constant and high-profile rebukes of Trump are actually hurting the other members who voted to impeach, likening her behavior to picking at an old wound. Republicans have complained they’re being asked about Cheney by their constituents and donors back home.

“She seems not to be able to leave it,” said Sen. Kevin Cramer (R-N.D.), a former House member. “People draw this conclusion that she’s being thrown out of the party. She’s not. But she’s asked for and received a position of leadership that, unfortunately, requires you to give up some of your autonomy to be the face of the caucus.”

And watching the consequences that Cheney suffered gives sympathetic Republicans little incentive to speak out. One House GOP lawmaker who voted to certify the election results, granted anonymity to candidly discuss the internal fire fight, said: “This whole discussion is certainly hurting the impeachment people, because they want to move forward and talk about their agenda for 2022.”

“This keeps putting them back in [trouble] with their base back home,” this Republican added. “And so if anything, Liz is hurting the impeachment folks the most.”

The situation is more dire for the 10 House Republicans who voted to impeach the president than the seven GOP senators who voted for conviction. Though all those House members must face voters next year, just Sen. Lisa Murkowski (R-Alaska) is up in 2022 among Senate Republicans who supported Trump’s conviction.

Murkowski will certainly face an unpleasant challenge from Trump strategists who have filled out the political team of challenger Kelly Tshibaka. But Alaska’s election laws have been changed to ranked-choice voting, easing her path to reelection.

Others will sleep even easier. Romney isn’t up for reelection until 2024 and Collins, Cassidy and Sen. Ben Sasse (R-Neb.) won new six-year terms in November. Sens. Pat Toomey (R-Pa.) and Richard Burr (R-N.C.) are retiring.

Burr shook his head when asked if he even thinks about Trump anymore, saying no one in North Carolina asks him about impeachment. The former Intelligence Committee chair added that it’s not even worth responding to Trump these days.

“It’s you guys that are starting the stories on Trump,” Burr told a reporter with a chuckle on Tuesday. “He got more press yesterday than the president.”

Olivia Beavers contributed to this report.

India has suffered a lot due to Covid says Donald Trump; demands...