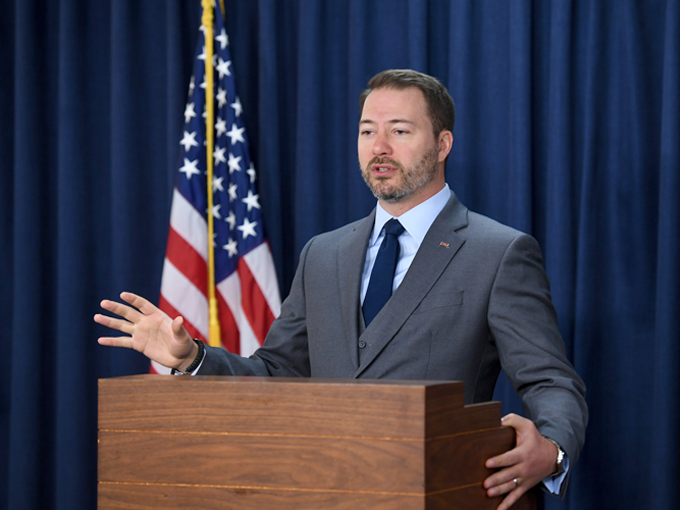 The Assembly investigation began nearly three months ago, state Sens. Michael Martucci and James Tedisco noted in a letter to the chairman of the Assembly Judiciary Committee, Charles Lavine, D-Long Island: “Impeachment should be due process and not overdue process.”

At a press briefing Thursday evening, Senate GOP Leader Rob Ortt, R-Niagara County, decried the fact Democrats have not stripped Cuomo of his emergency powers even as COVID-19 infections have decreased and with the governor facing probes by federal prosecutors, the state attorney general’s office and the Assembly.

He also cast doubt Assembly Democrats will go forward with an impeachment proceeding, though he argued there is already sufficient evidence to warrant such a move.

“I don’t think they have the guts to do what the people of New York expect them to do,” Ortt said.

Assembly Democrats say Cuomo is entitled to due process while an outside law firm that the chamber has retained delves into multiple allegations of sexual harassment against the governor. The Albany Times Union has reported that one married woman employed in the governor’s office alleges she was physically groped by Cuomo after he asked her to meet him at his state-owned residence, the Executive Mansion.

Democrats this week also got bills passed in both the Senate and the Assembly providing what amounts to a blank check in public funds to keep the Assembly investigation going. Previously, the projected legal bill had been set at $250,000 for the impeachment inquiry.

The governor’s office is using state money to pay an outside law firm to represent Cuomo in the various investigations. Published reports have indicated federal prosecutors are examining the $5 million book deal Cuomo landed for his pandemic memoir offering “leadership lessons” to the nation.

Sen. Dan Stec, R-Queensbury, was among those who expressed disappointment with the impeachment inquiry.

“The glacial pace of the Assembly’s impeachment investigation has created an air of doubt,” Stec said.

Although U.S. Sens. Charles Schumer and Kirsten Gillibrand, both Democrats, have said Cuomo should resign over the allegations of misconduct, the governor continues to hold influence with key legislative Democrats.

Mention of the Cuomo scandals has been recurring in matters seemingly unrelated to the controversies.

On Thursday, the Senate and Assembly confirmed two Cuomo political allies to seats on the Public Service Commission, John Maggiore and David Valesky.

Maggiore, a high-ranking Cuomo aide, was pressed by Sen. Tom O’Mara, R-Big Flats, about a report that he was part of a plan to discredit Lindsey Boylan, a former administration official who has accused the governor of sexual harassment, by leaking confidential personnel files.

Maggiore responded he could not discuss the matter because of the ongoing investigations.

Separately, O’Mara grilled Steven Cohen, a long-time Cuomo confidante and a lawyer, at a confirmation hearing arising from his nomination by the governor to a board seat at the Port Authority of New York and New Jersey.

Cohen had helped frame a press statement responding to charges that the Cuomo administration suppressed data relating to the pandemic deaths of nursing home patients. Cohen was also reportedly present for the discussions about leaks involving the confidential Boylan records.

Cohen declined to discuss what he knew about the alleged plan to tarnish Boylan’s reputation, saying if he did so he could be “waiving an attorney-client privilege.”