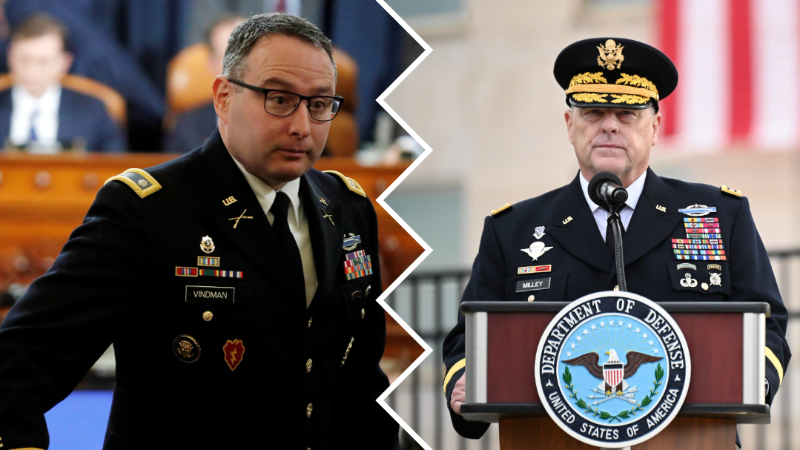 A key witness in the 2019 impeachment effort against former President Donald Trump is calling for Gen. Mark Milley, the chairman of the Joint Chiefs of Staff, to resign over a report that he promised his Chinese counterpart that he would alert them if former commander-in-chief ordered a strike against China.

In a tweet on Tuesday, retired Lt. Col. Alexander Vindman shared an article from The Washington Post about the account and wrote, “If this is true GEN Milley must resign.”

“He usurped civilian authority, broke Chain of Command, and violated the sacrosanct principle of civilian control over the military. It’s an extremely dangerous precedent. You can’t simply walk away from that,” he added.

If this is true GEN Milley must resign. He usurped civilian authority, broke Chain of Command, and violated the sacrosanct principle of civilian control over the military. It’s an extremely dangerous precedent. You can’t simply walk away from that. #dotherightthingintherightway https://t.co/izsMMCFPrz

Vindman’s tweet referred to an excerpt of the new book “Peril” by Bob Woodward and Robert Costa of The Washington Post, which revealed that Milley was so concerned that Trump would start a war with China that he contacted his Chinese counterpart to assure them that the U.S. could not conduct a strike.

As the Post reports, “In the book’s account, Milley went so far as to pledge he would alert his counterpart in the event of a U.S. attack, stressing the rapport they’d established through a backchannel. ‘General Li, you and I have known each other for now five years. If we’re going to attack, I’m going to call you ahead of time. It’s not going to be a surprise.’”

Additionally, after Jan. 6, Milley told his counterpart, “We are 100 percent steady. Everything’s fine. But democracy can be sloppy sometimes.”

Trump denied the account and said the idea that he would have ordered a strike against China was “totally ridiculous.” He also accused Milley of treason, as IJR reported.

Vindman served as the National Security Council’s (NSC) top Ukraine expert until he was removed from that position following his 2019 testimony during the House impeachment hearings.

Do you think Milley should resign?

In his testimony, Vindman said that Trump’s alleged efforts to pressure Ukrainian officials to open an investigation into then-candidate Joe Biden (D) was improper.

He announced his retirement from the military last year, and his attorney claimed Trump engaged in a “campaign of bullying, intimidation, and retaliation” after his testimony, as IJR reported.

We are committed to truth and accuracy in all of our journalism. Read our editorial standards.