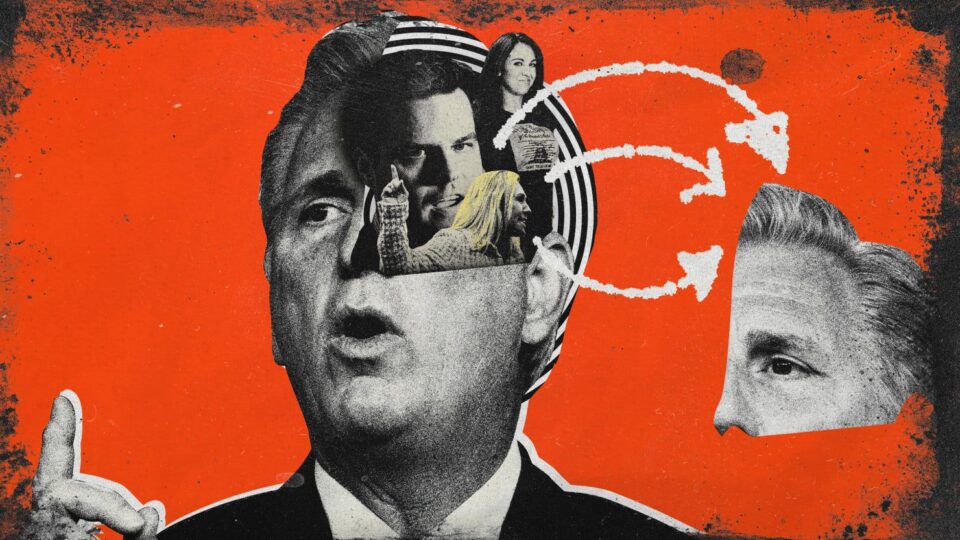 Greene went over to the House Republican leader, sat down next to him, and the two began whispering to one another while Hoyer spoke.

The Democratic leader was speaking on Greene’s outlandish, offensive social media history, which included a past endorsement of a tweet calling for Speaker Nancy Pelosi’s assassination.

Greene’s incendiary tweeting only came up on Tuesday because McCarthy wanted to turn a prior effort to strip Greene of her committees back around on Democrats. McCarthy was pushing a resolution to censure Rep. Maxine Waters (D-CA) on the grounds that she had incited violence by saying protesters should get confrontational if former cop Derek Chauvin was not convicted of murdering George Floyd. The censure resolution failed, but it unified the entire GOP conference and briefly changed the subject from the controversies sparked by McCarthy’s own members.

But that brief scene on the House floor Tuesday might encapsulate McCarthy’s leadership strategy in 2021: distract, deflect, defend, and ignore.

Instead of ruling with an iron fist, McCarthy has preferred a softer touch. He has kept his party’s most controversial lawmakers in the fold, largely choosing to turn the focus around on Democrats instead of dwelling on the troubling views springing forth from his own ranks.

McCarthy has issued condemnations of Greene’s rhetoric and behavior, but he’s also defended her over and over again. Where former top Republicans in the House—like Paul Ryan and John Boehner—would have kept their distance from the fringiest elements of the GOP conference, McCarthy has kept them close. Literally. When McCarthy sat with Greene on Tuesday, he was also seated next to Rep. Clay Higgins (a Louisiana Republican who claimed last year that his wife had the gift of premonitions) and another embattled Republican: Rep. Matt Gaetz (R-FL).

Gaetz is under federal investigation for allegedly paying for sex with underage girls. But McCarthy has avoided doling out any kind of discipline to Gaetz as long as formal charges haven’t been brought forward.

Unlike how he handled former Rep. Steve King (R-IA)—who McCarthy stripped committee assignments from over King’s history of racist remarks—McCarthy seems loath to do anything of the sort against any of the numerous lawmakers now saying and doing troubling things these days.

And that loose parenting style seems to have won over a particular contingent of the GOP conference.

“I can’t wait for Kevin McCarthy to be Speaker,” Rep. Lauren Boebert (R-CO) told The Daily Beast this week.

Boebert, who proudly declared from the floor on Jan. 6 that she had constituents outside the building, would likely not have been a close ally of, say, John Boehner. But Boebert sounded genuinely delighted at the prospect of a McCarthy speakership.

The same could be said of Rep. Madison Cawthorn (R-NC), another lawmaker who perpetrated the Big Lie and helped incite the Jan. 6 attack. Cawthorn gushed to The Daily Beast that McCarthy’s leadership had been “fantastic and exceptional.”

Such praise might be rich to Democrats. When the Democratic conference chair, Hakeem Jeffries (D-NY), was asked about the Waters comments and GOP attempts to censure her, he said McCarthy ought to worry about his own ranks.

“Lauren Boebert is a mess. Matt Gaetz is a mess. Marjorie Taylor Greene is a mess,” Jeffries said. “Clean up your mess, Kevin. Sit this one out.”

Privately, some Republicans will acknowledge the reality of that mess.

“Kevin McCarthy isn’t in control of the conference,” a Republican lawmaker told The Daily Beast. “He’s just along for the ride, just like the rest of us.”

“At some point an adult needs to take over,” said a senior GOP aide. “Being everyone’s best friend is not an effective leadership strategy.”

And another senior GOP aide said that for a guy who reminded “everyone who would listen” that he took out Steve King, “he’s been shockingly silent on MTG and the other.”

The GOP leader’s office declined comment on this story. But McCarthy is all smiles, casting himself as the leader that will bring Republicans back to power. Even critics cede that point, noting the party’s surprise gains in the 2020 election and the leader’s prodigious ability as a fundraiser.

Still, some Republicans wonder if McCarthy is treading down the same path traveled by some of his predecessors: placating his party’s most far-right flank in the name of gaining and keeping power. Boehner, now on a publicity tour for his new memoir, has reflected how that bargain made it impossible for him to run a functioning party after the tea party wave shot him to the speakership in 2011.

Denver Riggleman, a former GOP congressman from Virginia who was defeated in a 2020 primary, sees McCarthy heading that way. “His one and only job was to keep the conference together. If he can placate all those individuals, he will be elected speaker in 2022,” said Riggleman.

“If you think that you’re in a fight against good and evil,” he continued, “are you willing to deal with a little crazy to keep your agenda in motion, and to satisfy the one thing Kevin McCarthy wants—to be speaker?”

McCarthy, however, is dealing with more than a little crazy. Controversy has been unrelenting in the House GOP since the start of the new session. Several House Republicans, like Reps. Mo Brooks (R-AL) and Cawthorn, spoke at the “Stop the Steal” rally that preceded the deadly attack on the Capitol by a pro-Trump mob. Others, like Rep. Andy Biggs (R-AZ), the chairman of the archconservative Freedom Caucus, reportedly coordinated with the rally’s organizers on the far right.

When the mob was cleared from the House chamber, 147 members—the majority of the House GOP—voted to object to the Electoral College anyway. Some Republicans still recall the confusion in the lead-up to that vote, when McCarthy didn’t take a position on whether he’d vote to object or certify the results. He ended up voting to object.

Afterward, McCarthy couldn’t keep his own story on the insurrection straight, perplexing plenty in the party. At first, the GOP leader said that President Trump—his close ally and benefactor—bore “responsibility” for the Capitol attack. A week later, he backtracked, saying he thought Trump didn’t provoke it and that “everybody” had a responsibility to encourage peaceful demonstration. By the end of January, McCarthy and Trump were photographed together, grinning, at Mar-a-Lago. Accounts that the two had a blow-up phone call on Jan. 6, in which Trump callously suggested the attack was justified, shocked during Trump’s impeachment trial, but seemingly failed to change their relationship.

Meanwhile, fresh reporting in January about Greene’s past rhetoric—including her embrace of conspiracy theories about school shootings and wildfires sparked by Jews—put pressure on McCarthy to respond. Ultimately, he issued a statement saying Greene’s comments “do not represent the values or beliefs of the House Republican Conference.” But the GOP leader organized his conference against a successful Democratic-led effort to kick Greene off her committees. Just 11 Republicans backed that measure. Far more voted on a secret ballot to remove Rep. Liz Cheney (R-WY) from leadership because she voted to impeach Trump.

The juxtaposition in how Cheney and Greene were treated made GOP aides despondent about the direction of the party. But McCarthy did stick up for Cheney in the closed-door meeting where Republicans teed off on her for impeaching Trump. Doug Heye, a former adviser to former House Majority Leader Eric Cantor (R-VA), said it was an example of McCarthy’s balancing act paying off. “It’s a much more difficult job today than it was previously,” he said. “He’s done a good job keeping his members together.”

But in the eyes of plenty of Capitol Hill Republicans, McCarthy’s knack for accommodation has created its own set of problems. One came last week, when Punchbowl News reported that Greene and Rep. Paul Gosar (R-AZ) were moving to form an “America First Caucus” predicated on promoting a restoration of “Anglo-Saxon” political values to Congress and the country and opposing immigration—a move that made past racist dog whistles in the GOP look subtle by comparison.

Republicans quickly distanced themselves from the project—including Greene, who blamed a staffer for signing onto the project even as other members confirmed her involvement—and McCarthy released a statement criticizing it, even as he avoided mentioning it by name.

“America is built on the idea that we are all created equal and success is earned through honest, hard work. It isn’t built on identity, race, or religion,” McCarthy tweeted. “The Republican Party is the party of Lincoln & the party of more opportunity for all Americans—not nativist dog whistles.”

Those who back McCarthy, like Rep. Tom Cole (R-OK), say that one of his strengths is that he “never gives up” on members of his conference. “He knows when to discipline the conference and individual members,” said Cole, “but I think Kevin always tries to salvage the relationship and keep the Republican conference united.”

But King, the former Iowa Republican who embraced white nationalist rhetoric more subtle than that of the America First Caucus, saw McCarthy remove his committee assignments in 2019. “He’s made some tough decisions,” Cole said of McCarthy. “A lot depends on whether or not he thinks it’s a one time offense or a habit.”

Riggleman, one of the few voices in the GOP to have taken the threat of QAnon and right-wing extremism seriously, is doubtful that McCarthy will move to discipline those fringe lawmakers at this point, and speculated that his early reluctance to mete out discipline created room for them to push the America First Caucus.

“Did he give them too much rope? I think he did,” Riggleman said. But he also noted the other side of McCarthy’s possible calculation on the speakership: “If he didn’t give them rope, does he have an enemy on the far right that puts someone up against him, and he doesn’t get a majority of votes as speaker?”

McCarthy has been so methodical about cultivating allies that, at this point, he may have foreclosed such a threat. In 2015, McCarthy and Rep. Jim Jordan (R-OH) were enemies. The Freedom Caucus co-founder blocked his bid for the speakership when Boehner stepped down.

In the years since, however, the two have locked arms thanks to the one person who matters in GOP politics—Trump—and McCarthy has elevated Jordan to key posts, like top Republican on the influential House Judiciary Committee. The Trump years have left Jordan singing McCarthy’s praises. “Kevin has done a really good job of keeping our team together,” he told The Daily Beast.

That example speaks to McCarthy’s unique skill set, said Cole. “I look at Jim Jordan, who I will argue he’s helped turn into an asset by saying, ‘Hey, this guy has talents, let’s find a way to work with him,’” Cole said. “Jim has been a very effective member for us. And he did that by giving him leadership positions nobody else would have given him.”

Indeed, Jordan—who Boehner called a “legislative terrorist”—is now an established power center in the House GOP. That development might be chilling to those who would rather not see the likes of Greene in a similar position years from now. But many Republicans seem to see McCarthy’s predicament plainly.

“You’ve gotta hold people together,” Rep. Glenn Grothman (R-WI) told The Daily Beast of McCarthy’s job. “You’ve got to keep them in line, but you’ve got to remember, if you disagree with them today, maybe you need their vote tomorrow.”