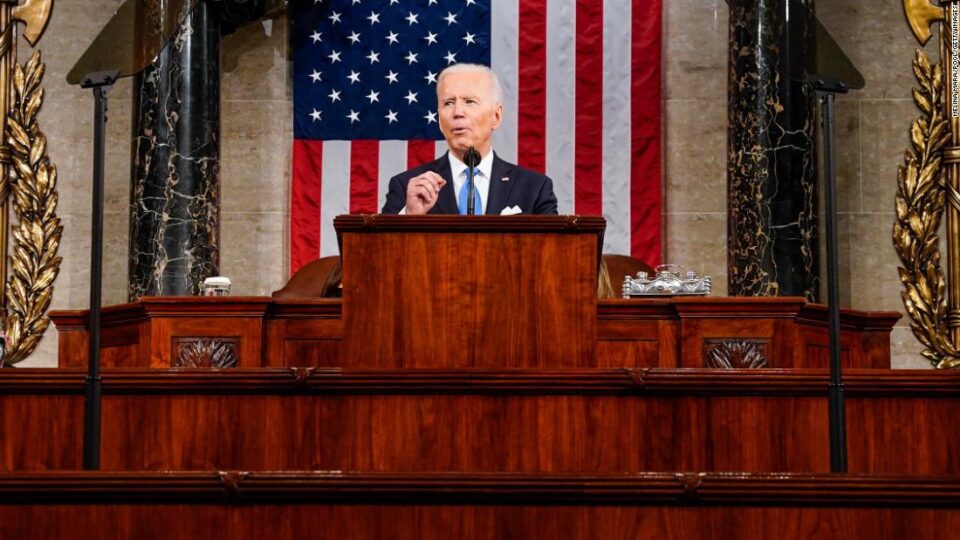 He made clear the scale of his ambition — not just to heal national divisions opened up by Donald Trump’s tumultuous presidency — but to launch a new epoch in which government is a tool to raise the living standards and ease the plight of workers and the middle class.

But the pageantry of political continuity created by Wednesday’s time-honored address, albeit curtailed by Covid-19, couldn’t quell the raging, inferno that Trump left behind for even a day.

“The insurrection was an existential crisis, a test of whether our democracy could survive. And it did. But the struggle is far from over,” Biden said.

Giuliani at the center of the storm

Rudy Giuliani — once the former President’s lawyer and one of the Trump acolytes who did so much to tarnish the democracy Biden wants to protect — threatened to steal the President’s headlines earlier in the day.

In a scene that once would have been considered outlandish, but for the head spinning uproar of the four years just passed, federal agents carried out sunrise searches of Giuliani’s office and apartment. This, again, was a raid that targeted the lawyer of an immediate past President. Giuliani has not been charged with a crime and has denied all wrongdoing.

The searches were in connection with a probe into whether the man formerly feted as America’s mayor lobbied illegally for Ukraine while caught up in Trump’s scheme to coerce Kiev to damage Biden, then a potential 2020 foe.

Giuliani’s efforts did not secure a second term for Trump, but the wider operation to discredit an election that Trump lost drags on, as a second flashback on Wednesday made clear.

The ex-President’s supporters won a court fight that will allow them to press ahead with a sham recount of election votes in Maricopa County, Arizona. The charade is being orchestrated by Trump supporters and one of the conservative TV networks that is undermining US democracy by highlighting the ex-President’s election fraud lies.

The court case was far from the only blast from the recent past that showed how democracy is in peril. Memories of a day of infamy on January 6 were everywhere on Capitol Hill on Wednesday night.

Biden’s speech came hours after CNN aired the harrowing eye witness account of Michael Fanone, a police officer beaten by the mob, that refuted Trump’s revisionism and his lie that police were greeted by “hugging and kissing.”

The return of Giuliani to the headlines, continued attempts by Trump’s orbit to discredit his fair-and-square election loss and haunting reminiscences of the Capitol riot raise the question of whether the Republican Party is willing — or able — to drag itself away from Trump.

The answer, which the GOP appears to be answering in the negative, will have a huge bearing on the ambitious plans Biden laid out on Wednesday night, including his vow to try to unite the country and even to produce some bipartisan legislation.

Hosting television anchors before his address, the President warned that he needed a partner across the aisle.

“I got to figure out if there’s a party to deal with. We need a Republican Party, we need another party, whatever you call it, that’s unified — not completely splintered and fearful of one another,” Biden said.

One of the key points of Biden’s address was his striking warning that US rivals like Chinese President Xi Jinping were betting that the US could not compete with their rampaging autocracies.

But a day in which Trump’s long shadow yet again loomed over American politics underscored the gravest threat to free political traditions and fair, untainted elections comes not from overseas but within the country.

That it’s necessary to stipulate which Trump impeachment is related to the raid on Giuliani’s home is its own commentary on the corruption and scandal that boiled almost every day of the last presidency.

It is also highly unusual for the Justice Department to execute a search warrant against a lawyer, let alone a former deputy attorney general who was the high profile lawyer of a former President.

The White House said it had no heads up about the search warrants being executed, in line with Biden’s vow to rebuild the wall that most presidents have maintained between the Justice Department and politics.

But the obvious and huge political implications of the move likely meant that approval to go ahead must have come from the very highest echelons of the department itself. The hyper-sensitive nature of the case also led to immediate speculation about the gravity of the evidence investigators were seeking, since a raid against Giuliani probably would require a high bar to get the go-ahead.

Giuliani’s son Andrew, who is also a member of Trump’s circle, claimed the raid was part of a political vendetta being waged by the Biden administration.

“All I will say is this: To all Americans out there, our Justice Department should be independent on politics,” the younger Giuliani said.

“Enough is enough, ladies and gentlemen,” he said. “We cannot stand for this anymore.” It will also likely not be long before Trump’s media propagandists start to concoct conspiracy theories about a “Deep State” plot against the ex-President.

But if a political interference was involved, it may have been to Giuliani’s benefit since New York federal prosecutors had previously sought a search warrant but were met with resistance from the Trump-era Justice Department over the strength of evidence. Former Attorney General William Barr was repeatedly accused of acting more like Trump’s personal lawyer than a neutral arbiter of justice.

It might actually have been more politically advantageous for Biden had officials changed the timing of the Giuliani searches, given that they forced the President to share news coverage on Wednesday.

Biden senior adviser Cedric Richmond said that the White House wouldn’t comment on the move against Giuliani since the Justice Department was meant to be independent. But he also made a clear implicit comparison between the behavior of Biden and the former President who frequently used to openly call on the department to go after his political enemies.

“We are very mindful that the people in this country have to have full trust in the Department of Justice,” Richmond told CNN’s Wolf Blitzer on “The Situation Room.”

“The President is not going to put his thumb on the scale or comment about any investigation, and the investigations should just take their course without political interference.”

Amid a current whirl of conspiracy theories, flagrant lies from Trump world and in the bitter overhang of the 2020 election and the last, aberrant presidency, Biden’s toughest task may be convincing the red half of the country that’s true.