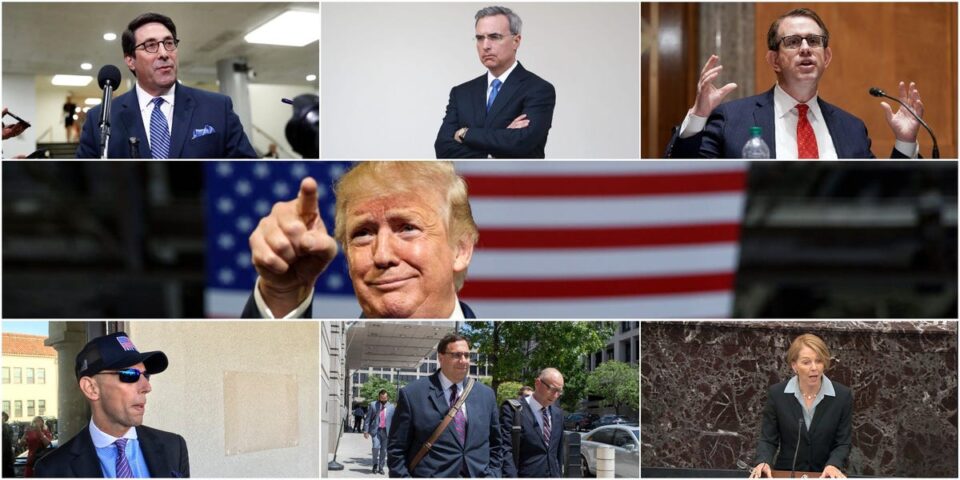 Good morning! If this was forwarded to you, sign up here. I’m Brent Griffiths. Send tips to bgriffiths@insider.com or tweet me @BrentGriffiths.

Here’s what we’re talking about today:

1. ALL OF TRUMP’S LAWYERS: Former President Donald Trump faces legal jeopardy on multiple fronts. He runs the risk of becoming the first president to be indicted. In his corner is a mix of lawyers who helped him try to overturn the election, plus those who defended him during his first impeachment. Even in the ever-changing Trumpworld, there are many familiar faces.

Here’s a peek at Insider’s exclusive list of Trump’s team:

The New York team: Trumpworld remains concerned about the Manhattan investigation into the Trump Organization’s finances. The former president has held onto a respected team to fight it.

Read the rest of our exclusive report on Trump’s team.

2. Rep. Matt Gaetz reportedly sought a blanket pardon from Trump: The Florida Republican privately asked the White House for pardons for himself and other members of Congress just before Trump left office, The New York Times reports. It’s unclear if the White House knew about the Justice Department’s probe into whether Gaetz engaged in sex trafficking. Gaetz’s office denies that he had sex with a 17-year-old or that he specifically requested a pardon related to the investigation. More on the latest development in Gaetz’s scandal.

3. Biden shifts the vaccine goalposts again: He announced that all American adults will be eligible to get the COVID-19 vaccine by April 19. This comes after Biden already shifted his original goal from 100 million to 200 million shots — and had given states a May deadline to open eligibility.

Zoom
calls and TikTok. Here’s a peek at names you should be watching.

5. White House says no to vaccine passports: Press Secretary Jen Psaki made it clear that Americans won’t be required to carry proof of their COVID-19 vaccination status. These so-called vaccination passports have garnered momentum lately as the US prepares to open up, and some states — including Texas and Florida — have already banned them. Psaki said “there will be no federal vaccinations database.”

6. More of Derek Chauvin’s former colleagues testified against him: Prosecutors called three Minneapolis police officers, some of whom trained Chauvin directly, as they sought to drive home that he violated department policy by not taking his knee off of George Floyd’s neck. But the defense did get a concession when Lt. Johnny Mercil, who is a use-of-force instructor for the department, said some images appeared to show Chauvin with his knee on Floyd’s shoulder. More key moments from day 7 of the landmark trial.

7.  Mitch McConnell wants corporations to stay out of politics … except when they donate: McConnell, the Senate minority leader, made clear that his order to CEOs to stay out of politics is not about political contributions. His clarification isn’t surprising — McConnell has spent decades fighting limits on campaign contributions. But his comments make clear the odd juxtaposition of CEOs criticizing Republican efforts to pass restrictive voting laws while many of their’ political arms support both parties. More on the fallout here.

8. The top things for your calendar, all times Eastern:

9. Remembering Rep. Alcee Hastings: Hastings, a 15-term congressman, died at 84 after a career that saw him appointed as Florida’s first Black federal judge since reconstruction, then being impeached on corruption charges. He staged a comeback as a congressman who focused on advancing a progressive agenda in the Democratic Party. More on his legacy here.

10. Want to be like Mike? Here’s what it’s like at Michael Jordan’s secret golf course: Even though the NBA star has sworn his guests to secrecy, stories about the course are starting to emerge. The exclusive club has fewer than 100 members and invite-only tee times. Guests are saying the course was designed by Jordan, for Jordan, and aimed at maximizing his style of play against his opponents — earning it the nickname “Slaughterhouse 23.”

Today’s trivia question: This president was such a regular at Augusta National, home to the Masters, that a cabin was built for him. Who was it?

Sandy Hook, Oklahoma City, Pizzagate, and a decade of conspiracies all unraveled on Jan. 6 – The Philadelphia Inquirer