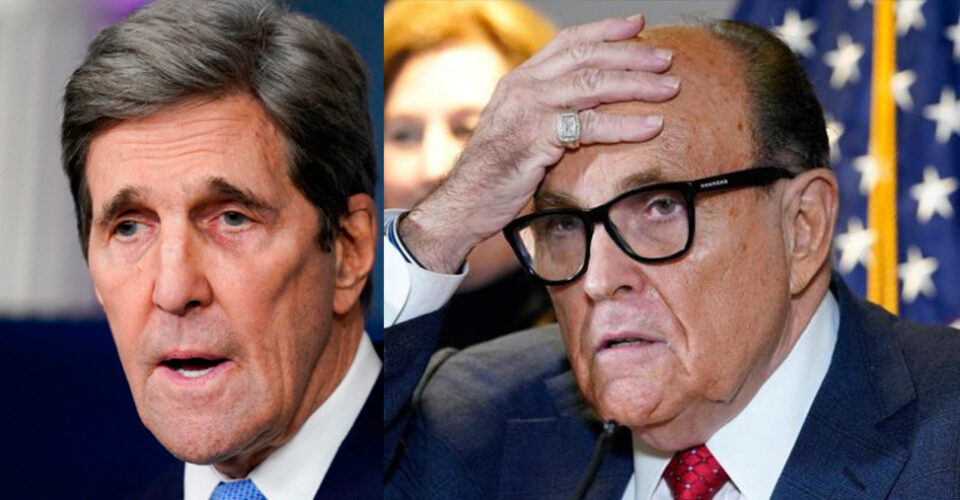 Yet it was Rudy’s home and office in Manhattan that were raided Wednesday by the corrupt FBI, while America’s Gigolo continued to get a total pass on the amazing revelation that he’s been whispering top-secret U.S./Israeli intelligence to one of the top leaders of Iran, which leads the world in state-sponsored terrorism.

Imagine if one of Donald Trump’s ambassadors-without-portfolio (think Rudy) had been outed by the foreign minister of a failed terror state for informing him about the 200 raids being conducted against the mad mullahs by our staunchest ally in the Mideast.

But when it’s John Kerry and his latest “botched joke,” there’s nothing to see here folks, move along. Since the story was broken (and buried in the 20th paragraph) in The New York Times, the alt-left networks and cable channels have given it an almost total leaving-alone.

Just last week, in fact, The Washington Post was basically comparing Kerry’s latest phony-baloney job as “climate czar” to the most difficult sacrifices in American history, like maybe Washington crossing the Delaware, or the Bataan Death March.

“These days, Kerry, at 77 and serving as President Biden’s climate envoy, is flying commercial, catching red-eyes to Europe … .”

Flying commercial! On a red-eye! Someone give Liveshot another Purple Heart or three.

“… trying once again to … salvage the fight he has long considered central to his own stamp in history … .”

His own stamp in history? He’s already in the record books as the most successful gigolo in world history. How many people have had Louis Prima croon a song about them — “Just a Gigolo.”

Back to the slobbering Washington Post, as they rewrite history:

Almost president? Talk about a legend in his own mind.

Kerry just can’t stop stepping in it. This newest embarrassment comes just a few weeks after he got busted violating the Deep State’s airline mask mandate — on, yes, a commercial flight.

How many more indignities must the Man Who Was Almost President endure at the hands of these insufferable tourist-class-traveling hoi polloi in their declasse MAGA hats?

Kerry’s initial response to his buddy in Tehran busting him in a passing reference was that he never said any such thing. The next response, by his obsequious coat holders, was that Kerry wasn’t actually passing on anything secret — that stories about Israeli raids had already appeared in the press.

So which is it? Did Kerry not say it, or did he say it and it was no big deal?

And now he’s the climate czar. As someone pointed out this week, if global warming truly were a threat to human existence, would even someone as non compos mentis as Dementia Joe Biden really put … John Kerry in charge of saving the earth?

The only negotiating success Kerry has ever had was when he arm-twisted the city of Boston into removing the fire hydrant in front of the mansion owned by his second wife’s first husband’s trust fund in Louisburg Square.

Remember the first Gulf War, back in 1991, and then-Sen. Kerry’s two letters to the same constituent in Newton? Those two form letters perfectly sum up Kerry’s pathetic half-century in politics.

The first letter to Walter Carter was dated Jan. 22:

“Dear Mr. Carter, Thank you for contacting me to express your opposition to the Bush administration’s additional deployment of US military forces … I share your concern. On Jan. 11, I voted … against a resolution giving the president immediate authority to go to war.”

On Jan. 31, Kerry sent another missive to Carter:

“Dear Mr. Carter, Thank you very much for contacting me to express your support for the actions of President Bush … From the outset of the invasion, I have strongly and unequivocally supported President Bush’s response to the crisis and our military deployment in the Persian Gulf.”

In other words, Kerry was against the war before he was for the war.

As Senate President Billy Bulger noted at his St. Patrick’s Day breakfast that year, “It was touch and go there for a while. Sen. Kerry couldn’t decide which side he was on.”

Nothing has changed. He’s just a gigolo.

Meanwhile, Rudy Giuliani, who actually once managed a mega-crisis, namely 9/11, who got the Big Apple back on its feet in so many ways, who as U.S. attorney took on the Mafia despite multiple death threats — the corrupt G-men are giving him the bum’s rush like he’s Roger Bleepin’ Stone.

Rudy Giuliani started out in politics as a Democrat. In other words, he too could have had a complete free ride all these years, just like John Kerry.

Is it too late for Rudy to switch parties again and salvage his own stamp in history?