How safe is the U.S. president's 'nuclear football'? Pentagon watchdog to find out - ImpeachBeat.com 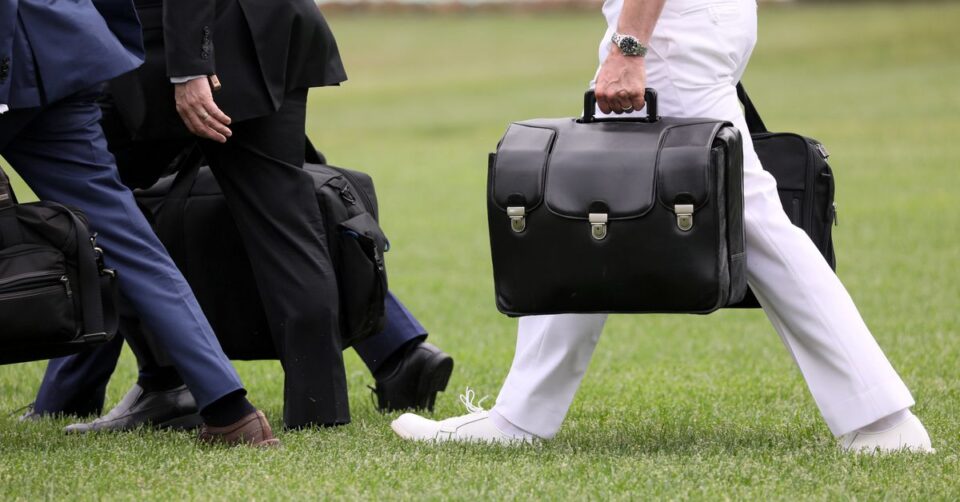 A military aide carries the so-called nuclear football as he walks to board the Marine One helicopter with U.S. President Donald Trump for travel to Florida from the White House in Washington, U.S. May 8, 2019. REUTERS/Jonathan Ernst/File Photo

WASHINGTON, July 20 (Reuters) – The Pentagon’s watchdog said on Tuesday it would evaluate the safety protocols surrounding the president’s “nuclear football” – containing codes needed for a strike – after one such briefcase nearly came within range of rioters storming the Capitol on Jan. 6.

In a brief notice, the Inspector General’s office said it would evaluate the extent to which Pentagon officials could detect and respond if the Presidential Emergency Satchel were “lost, stolen or compromised.”

“We may revise the objective as the evaluation proceeds,” it said.

One U.S. official, speaking on condition of anonymity, said concerns surrounding the Jan. 6 siege helped trigger the evaluation. On that date, Vice President Mike Pence was at the U.S. Capitol, accompanied by a military aide carrying a backup nuclear football when the building was stormed by supporters of then-President Donald Trump.

The satchel holds the codes the president would use to authenticate an order to launch nuclear missiles should he or she not be at the White House.

Security footage made public during Trump’s subsequent impeachment trial showed Pence and the military aide – who had the satchel – being ushered to safety as protesters got closer to their location.

“At no point was it ever compromised,” said a source familiar with the situation.

Even if rioters had taken possession of the satchel, any nuclear strike order would still have needed to be confirmed and processed by the military.

But Jan. 6 was just one of several times during Trump’s presidency that the security of the nuclear football came into question.

In November 2017, when Trump was in Beijing having lunch with Chinese President Xi Jinping, a Chinese security official got into a tussle in another room with the U.S. military aide carrying the briefcase.

Then-White House chief of staff John Kelly, a tall, imposing retired general, intervened and got into a physical altercation with the Chinese official to ensure the nuclear football did not get away from the military aide, a former senior Trump administration official said.

When a senior U.S. official spoke to Chinese officials about the incident at the scene, the Chinese wanted to extend an apology to Kelly over the episode. But Kelly refused to accept the apology, the official said.

“Tell them they can come apologize to me in Washington,” Kelly said, according to the official.

On Jan. 20 of this year, Trump insisted on leaving Washington before the inauguration of Democrat Joe Biden, meaning a live football would have to go with him to be on hand until Biden was sworn in.

Trump was accompanied by a military aide carrying a nuclear football to Palm Beach, Florida, and kept it near him until Trump was no longer president, a source familiar with the situation said.