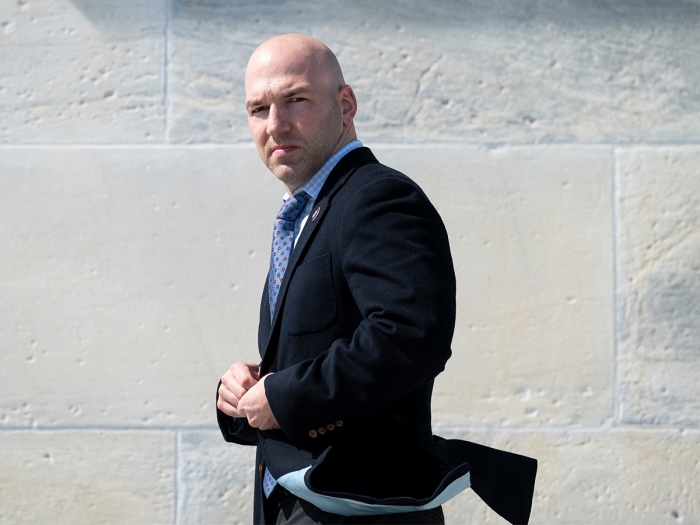 Last Thursday, Republican Rep. Anthony Gonzalez of Ohio announced he would not seek reelection in 2022. The 37-year old congressman was one of 10 House Republicans who voted to impeach then-President Donald Trump after the Jan. 6 assault on the U.S. Capitol, and he is now the first to call it quits.

Facing fervent opposition from Trump supporters in his district, a Trump-backed primary challenger and a potentially thorny redistricting process — Ohio will lose a congressional district after apportionment — Gonzalez decided there was no future for him in the GOP. It’s early yet, but Gonzalez’s retirement could foreshadow what awaits the other nine House Republicans who voted to impeach Trump; many of them could face a difficult path to reelection. And if they retire like Gonzalez or lose reelection, the outcome will likely be an even Trumpier Republican Party in Washington.

At this point, all but one of these 10 Republicans has received a formal rebuke from their state or local party committees, as the table below shows. Additionally, all 10 now face at least one primary challenger (or faced, in the case of Gonzalez). While not all of these intraparty opponents are real threats, many are shaping up to be roadblocks to renomination. This is particularly true in the four districts where Trump has endorsed a primary challenger, including Gonzalez’s race, where former Trump aide Max Miller has the former president’s backing and, now, no incumbent to run against.

And outside of Wyoming Rep. Liz Cheney, the 2021-22 redistricting process could be an added complication for these representatives, too. These 10 members can largely be split into two groups: those most endangered by primary challenges and those most endangered by redistricting. Let’s start with those facing the toughest primary hurdles — the three incumbents besides Gonzalez who face a Trump-endorsed challenger.

Trump’s endorsement track record is a bit of a mixed bag in that there is some evidence that he padded his record in 2020 — that is, endorsing candidates who were already likely to win — so it’s unclear how powerful a Trump-endorsement will be in 2022. But at this point, Cheney may be in the most trouble, despite being the strongest fundraiser and the most well-known of the Republicans who backed impeachment.

Earlier this month, former Republican National Committee member Harriet Hageman entered the Wyoming House race, with an endorsement from Trump. Hageman could prove to be a powerful opponent, too, considering her political background and competitive showing in the 2018 GOP primary for Wyoming governor — she won 21 percent in a crowded race, finishing just 12 percentage points behind now-Gov. Mark Gordon. Hageman may also be able to consolidate anti-Cheney sentiment in the state, which would be a blow to the incumbent, who would benefit from a large, fragmented field. Tellingly, three other primary challengers have already withdrawn from the race, two of whom then endorsed Hageman. Just one notable candidate has refused to drop out at this point: state Sen. Anthony Bouchard. But it’s hard to know how much support Bouchard’s candidacy will garner due to the disturbing revelation that he impregnated a 14-year old girl when he was 18 and married her when she was 15.

Also in this category are Reps. Fred Upton of Michigan and Jaime Herrera Beutler of Washington. Upton faces Trump-backed state Rep. Steve Carra, who recently introduced legislation to audit Michigan’s 2020 election results. This, in large part, explains his endorsement by the former president, which could help topple Upton, who was also censured by at least five GOP county committees in his district for supporting impeachment. Upton has been around for a long time (he won his first election in 1986), but he might be vulnerable, too, as his lone 2020 primary opponent won 37 percent despite raising almost no money and attracting little notice — and this was before Upton voted to impeach Trump. Meanwhile, Herrera Beutler’s main challenger in Washington is Trump endorsee Joe Kent, a former Special forces officer and husband to a Gold Star recipient. Like Carra, Kent has questioned the 2020 election results, telling CNN in July that “I think Trump won, but I want to prove it.” However, the electoral math might be more complicated in Washington than Michigan because of Washington’s top-two primary system (also used in California), where the top-two vote getters — regardless of party — advance to the November general election. If Democrats consolidate around one candidate, Herrera Beutler could still attract enough backing from some Republicans and independents to finish second and advance. Moreover, the anti-Herrera Beutler vote could be fragmented among Kent and Heidi St. John, a Christian author and home-schooling advocate who has criticized Kent as a carpetbagger who only recently moved to the southwestern Washington district.

While Reps. Tom Rice of South Carolina and Dan Newhouse of Washington don’t yet have Trump-endorsed opponents, they still face more primary woes than redistricting problems. Rice, for instance, has to win a majority of the vote in the Republican primary — or a majority in a runoff if no candidate initially wins more than 50 percent of the vote. This isn’t true of the other Republicans we’ve examined, which means a crowded candidate field could be especially tricky for Rice as he can’t skate by with a plurality win in the primary. Rice currently faces at least three serious-looking GOP opponents in conservative media personality Graham Allen, state Rep. Russell Fry and Horry County school board chair Ken Richardson, along with a host of other Republicans. (Eight Republicans are running against Rice so far.) Newhouse, meanwhile, also has three notable Republican opponents: Loren Culp, a former police officer and Washington’s GOP nominee for governor in 2020, as well as state Rep. Brad Klippert and businessman Jerrod Sessler. Like Herrera Beutler, Newhouse might benefit from Washington’s top-two primary format if he can retain enough base support while the other Republican contenders split the rest of the GOP vote. And Newhouse has performed this feat before in his solidly red district and gone on to win in November against another Republican, so it’s plausible that his impeachment vote could win over some independent and Democratic voters in both the primary and the general. But it would not be a shock to see Trump step in to better help Republicans consolidate around one opposition candidate — perhaps Culp, who made false claims about widespread voter fraud in the state’s 2020 gubernatorial election.

As for the other four other Republican representatives who voted to impeach Trump, they may face more danger from redistricting at this point. Reps. John Katko of New York and Adam Kinzinger of Illinois both hail from states where Democrats could change their district lines to make it harder for the Republicans to win reelection. Katko has held onto his Democratic-leaning district since he first won in 2014, but in an effort to defeat him, New York Democrats could make his seat even bluer and/or draw him in with Republican Rep. Claudia Tenney in the hopes that her more conservative track record would help her best Katko in a GOP primary, perhaps making her easier to defeat in a general election. So far, Katko has only attracted minor primary opposition, but Trump said this summer he would back a high-profile conservative challenger if one could be found. Meanwhile, Kinzinger’s seat in exurban Chicago could be dismantled by Democratic mapmakers in Illinois, potentially forcing him into an uphill race against an incumbent. And if he faces another Republican, he might have a particularly difficult time winning a primary given his criticism of Trump. After all, even if Kinzinger ends up with a decent district to run in, he will still face a primary challenge from former Trump administration official Catalina Lauf.

The two remaining Republicans who voted in favor of impeachment, Reps. David Valadao of California and Peter Meijer of Michigan, don’t have to worry about Democratic state legislators targeting them because their states use independent redistricting commissions. However, Valadao already holds the bluest seat of any Republican in the House, so any shift to the left could cost him reelection. Valadao also has to navigate the top-two primary format, but unlike Herrera Beutler and Newhouse, he doesn’t have much Republican opposition. The only notable Republican to pop up is Chris Mathys, a former Fresno city councilman who actually ran a distant third in a GOP primary for a House seat in New Mexico last year. Meanwhile, the initial draft maps from Michigan’s redistricting commission created a Grand Rapid-based district that Trump would have carried by less than 1 point in 2020. If lines like that hold true for the final map, that could make Meijer’s seat slightly more Democratic than it is right now (Trump +3 in 2020). That area moved to the left during the Trump era, and it could continue to do so. But working in Meijer’s favor is that he lacks a high-profile GOP primary opponent — the most notable name at this point is Tom Norton, who finished a distant third behind Meijer in the 2020 primary.

With Gonzalez already headed for the exits, the departure of some or most of these 10 members could have large consequences for the Republican Party — and democracy itself. Nine of the 10 Republicans who voted for impeachment ranked among the 28 Republican House members who have been most likely to vote in ways to protect electoral democracy, according to FiveThirtyEight’s recent analysis of congressional voting patterns. In fact, Cheney, Katko and Kinzinger were the likelist members of the House GOP to vote in favor of pro-democracy positions. But those three may be most in danger of losing their seats. And now with Gonzalez’s retirement and the difficult paths to reelection for many of the other Republicans who voted to impeach Trump, it seems there’s not so much an intraparty debate with the GOP about Trump’s position in the party, but rather a one-sided battle where the small minority looks set to get even smaller.

Hageman is Trump’s candidate, but he doesn’t get to vote