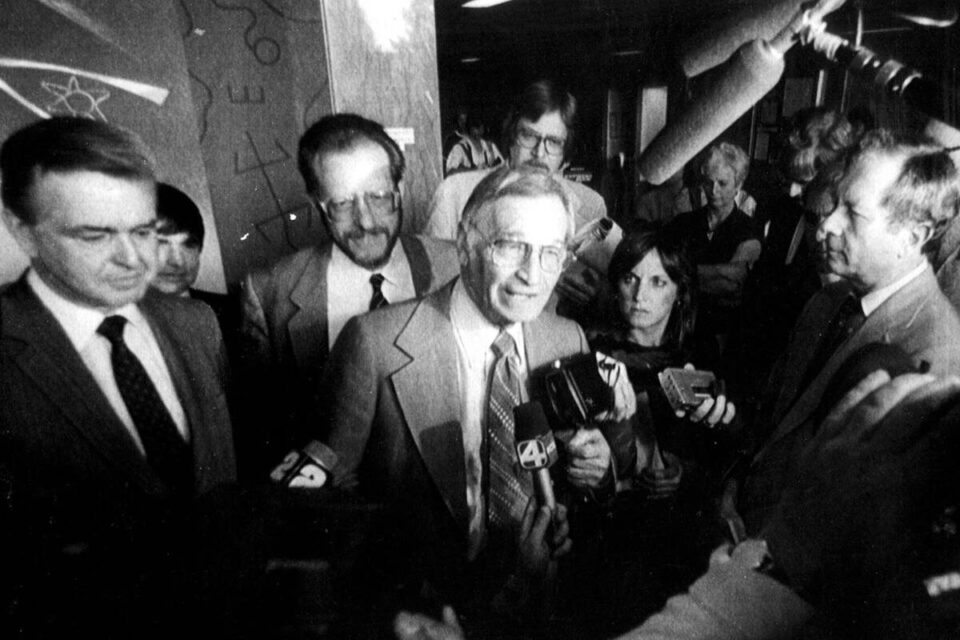 U.S. District Judge Harry Claiborne was enraged in April 1980. He had just learned that he was the target of a federal grand jury investigating his involvement in alleged illegal wiretapping when he was a prominent defense lawyer.

It was the same grand jury that federal strike force prosecutors were using against the mob in Las Vegas.

Claiborne called the strike force “a bunch of crooks” and said he wasn’t going to let the prosecutors run roughshod over the community.

He and his fellow federal judges had been sparring in court with the prosecutors over their aggressive tactics against organized crime.

And if that wasn’t enough, Claiborne also was embroiled in an ongoing legal battle with state gaming regulators, who had challenged his decision to wrestle away control of the mob-ridden Aladdin hotel.

It turned out to be too much to handle for one man.

Claiborne was never charged in the wiretapping investigation. But after a new FBI agent, with extensive undercover experience, arrived in Las Vegas to take the reins of the local bureau, the judge’s fortunes took a turn for the worse.

Joseph Yablonsky, known as the “King of Sting” within the FBI, struck a questionable deal with a former client of Claiborne’s — fugitive Nevada brothel boss Joe Conforte — to accuse the judge of taking bribes.

The next thing you know Claiborne — the judge who stood up to federal prosecutors fighting the mob — was charged with bribery and filing false tax returns.

The Conforte allegations never held up, but Claiborne was ultimately convicted on the tax charges and sentenced to two years in federal prison.

In 1986, Claiborne became the first federal judge in 50 years to be impeached by the House, convicted in the U.S. Senate and removed from the bench.

His impassioned testimony at his trial before the Senate demonstrated the public speaking skills he polished as a defense lawyer. Former Las Vegas Mayor Oscar Goodman was Claiborne’s lead attorney during the impeachment trial.

I have not been corrupt in my office.

“I have not been corrupt in my office,” Claiborne told the senators. “And as long as that is so, I could not walk away and leave any impression that I might be guilty of something that I did not do. So I chose to fight, and I will fight here. And if I lose here, I will continue to fight. And I will continue to fight until my good name is cleared, until somewhere along the line, someone will listen and find out once and for all what has happened to me and what has happened to my life.”

It was a hard fall from grace for a man who had become a legal legend.

Claiborne served the final months of his prison term after he was removed from the bench and quietly returned to practicing law.

On Jan. 19, 2004, at the age of 86, Claiborne stopped fighting to clear his name. Suffering from cancer, a heart condition and Alzheimer’s, he took his own life.

Part 7: A Judge Falls From Grace

Claiborne’s unforgettable saga to defend his honor is told in the seventh episode in the Review-Journal’s second season of the popular, true crime podcast series, “Mobbed Up: The Fight for Las Vegas.”

Your host for season 2 is Review-Journal investigative reporter Jeff German, who has covered organized crime in the city for more than 40 years.

Where and how to listen

“Mobbed Up: The Fight for Las Vegas, Season 2” is available for free on all major podcasting platforms, including Apple Podcasts, Spotify, Google Podcasts and more.

Season One of “Mobbed Up,” published in summer 2020, chronicled the rise and fall of the mob in Las Vegas over the course of 11 episodes.