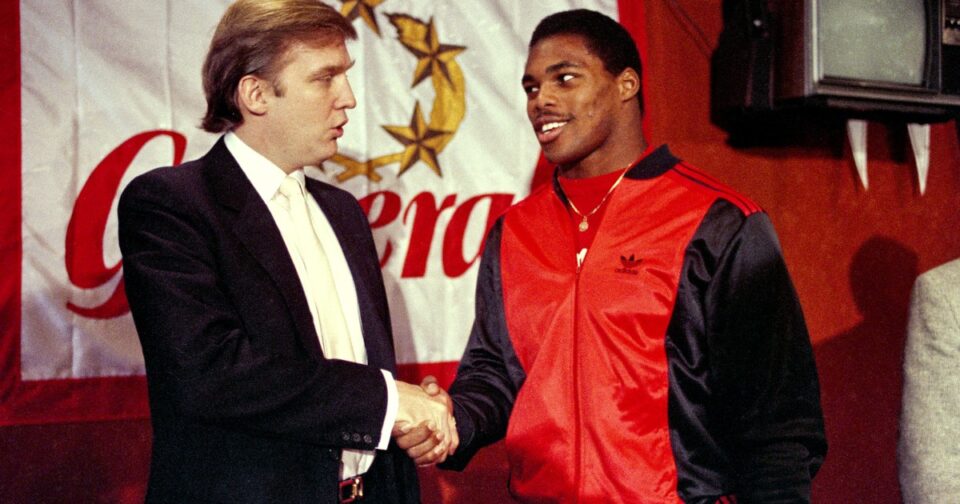 Football great Herschel Walker is running for the U.S. Senate.

I know because his campaign has sent a steady stream of emails filled with football puns since he announced his candidacy in late August.

I can’t help but chuckle whenever I see stuff like “Will you be one of my first recruits?” and “There’s too much at stake to sit on the sidelines.” Even his campaign logo is loosely shaped like a football as if Walker saw “stick to sports” as a bold political strategy and not an attempt to stop progressive Black athletes from talking about things a lot of conservative white people didn’t want to hear.

Yet as comical as it is to see the Heisman trophy winner lean on Dad jokes for fundraising, the reality is a poll this week showed more than 75% of the state’s GOP voters prefer Walker over the rest of the Republican field.

Maybe football references are enough. Or maybe it has nothing to do with football and it’s all about his near 40-year friendship with Donald Trump, who endorsed him. Roughly 63% of Republicans still want the twice-impeached former president to lead the party. Lead them where is unclear.

Saturday’s “Justice for J6” rally in Washington turned out to be another failed attempt to rebrand violent insurrectionists as innocent victims. But the reason for the Jan. 6 attack itself has not lost any of its political potency. That’s why Walker’s unrelenting support of Trump, more so than his past football glory, is his best play.

This week, Rep. Anthony Gonzalez (R-Ohio) announced he would not seek reelection in 2022. He would not be supporting Trump and his big lie that the election was stolen. Gonzalez, also a former NFL player, facing threats to his family and primary challenges, decided to get out of the game.

Gonzalez was one of 10 House Republicans to vote to impeach after the Capitol attack.

“I don’t believe he can ever be president again,” said Gonzalez, a former Ohio State Buckeye, adding, “most of my political energy will be spent working on that exact goal.”

(Not sure whether Gonzalez meant the goal thing as a pun, but his rebuke of Trumpism is pretty clear.)

It’s also clear that with each Republican lawmaker who resigns or is censored for taking a stand against Trumpism, the more the Republican Party aligns itself with the Jan. 6 attack on both the Capitol and our democracy.

Despite all of the shameless emails dripping in corny sports references, Walker, who hasn’t lived in Georgia for decades and has a troubled past that includes accusations of pointing a gun to his ex-wife’s head, is leading among Republicans because he supports Trump.

Not because he played football. After all football didn’t save Gonzalez, who is retiring because he didn’t want to face Max Miller, a Trump-backed primary challenger who served as a senior advisor in his White House. And even if Gonzalez managed to hold on to his seat, he’d be an odd man out in his own party, so what’s the point?

“This is no loss for Ohio or our Country,” Trump stated about Gonzalez’s exit.

I wished that were true. As a Michigan Wolverine fan, I never root for anything Ohio State. But I am disappointed to see Gonzalez leave under these circumstances because some things are bigger than football.

a true punk rock comic who never backed down