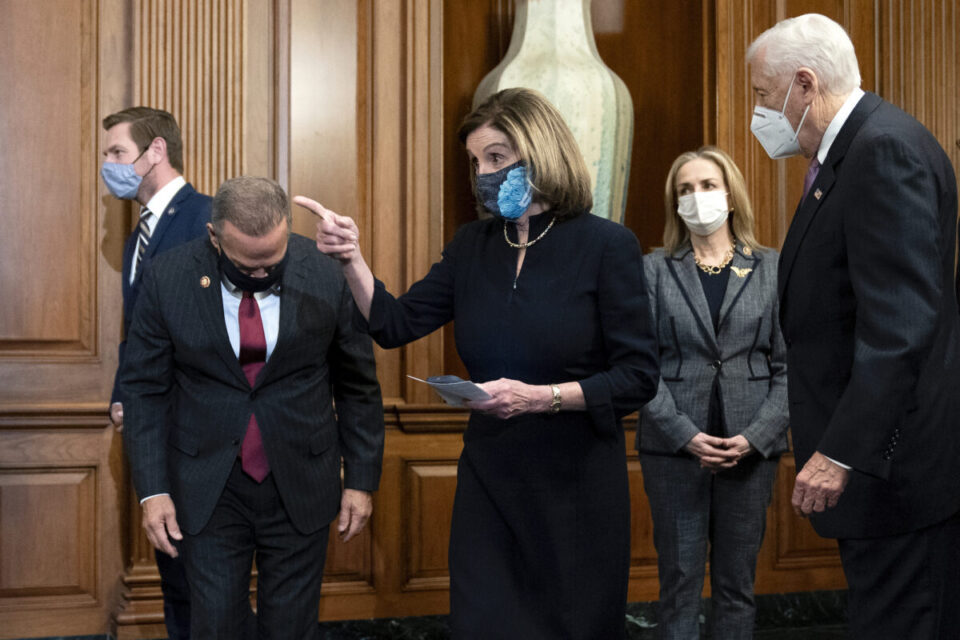 The 10 Republicans who joined the Democrat effort to impeach former President Donald Trump in February, saying he was responsible for the breach on the Capitol, all received criticism from their home states—while some were censured, others were told to resign. Currently, 9 out of the 10 are facing primary challengers from within the GOP, Trump’s America First Wing.

“Instead of attacking me and, more importantly, the voters of our movement, top establishment Republicans in Washington should be spending their energy in opposing Biden, Pelosi, Schumer, and the Democrats,” Trump said in his February CPAC speech.

“How about that? The good news is in her state, she’s been censured, and in her state, her poll numbers have dropped faster than any human being I’ve ever seen. So hopefully they’ll get rid of her with the next election. Get rid of them all,” Trump added.

Rep. Cheney, the most well-known and established congresswoman in the group of 10, has faced constant backlash since voting to impeach Trump, including being censured by her state’s Republican Party and later being removed as GOP House Conference Chair for her constant criticism of Trump.

Cheney is being challenged by Wyoming State Senator Anthony Bouchard whose campaign raised $400,000 in 3 months in small donations. Bouchard said he is the strong conservative that Wyoming needs.

“President Trump stated, ‘The Liz Cheney’s of the world: We have to get rid of them,’” said Bouchard in a media release. “It looks like conservatives across America, but especially in Wyoming, agree as strongly with him as I do. My campaign’s momentum is growing every day.”

Although Trump has not formally endorsed Bouchard, Trump’s press director put out a statement saying a Wyoming poll found that Cheney is extremely vulnerable since her state voted overwhelmingly for Trump in 2020.

Despite the backlash from within the party, Cheney and the other nine Congress members have held firm to their decision to impeach Trump and received support from Democrats. However, their opponents believe the vote against Trump is key in swaying voters.

“He is a Marine Veteran, a son of Ohio, and a true PATRIOT. Current Rep. Anthony Gonzalez should not be representing the people of the 16th district because he does not represent their interest or their heart.”

Beutler is facing opposition from former Green Beret Joe Kent, who was deployed 12 times and whose wife was killed while fighting in Iraq. Kent criticized Beutler’s voting record as being liberal and for supporting failed policies that put America last.

“Beutler claimed she’s a conservative. Beutler voted with the radical left to halt the construction of the border wall. She voted for amnesty. She voted for the sham impeachment and was the star witness in the ‘trial,’” Kent said in a recent statement.

Trump’s Secretary of Defense, Christopher Miller endorsed Kent, saying, “I have been in combat with Joe Kent. In combat, a person’s true character is revealed. The only things that matter are honor, endurance, selfless service, and empathy. No one I know better exemplifies those virtues.”

Meanwhile, Rep. Kinzinger is being challenged by former Trump aide Catalina Lauf, who criticized the incumbent for voting a third of the time with Democrats.

“I proudly served in the Trump Administration to advance the President’s pro-growth agenda. My opponent has spent his time in Congress enabling the Democrats’ anti-American agenda. America First put IL-16 first—impeachment put the Swamp first,” Lauf said in a social media statement Monday.

Kinzinger spokesperson Maura Gillespie in February told the Sun-Times in an email, “It’s a bit early to comment when we don’t even know what the districts will look like. But I will say that Congressman Kinzinger has a proven record of leadership and integrity, serving the interests of his constituents and his country—not the sole interests of one man.”

According to Andrew Boucher, a partner at RightVoter and an organizer of The Charleston Meeting, “You can’t be an anti-Trump Republican and win a primary in this party anywhere in America.”

“There is not going to be a single person who wins a Republican primary in 2022 who runs on the basis of ‘I think we should move past Donald Trump; I don’t think Donald Trump did a good job as president,’” Boucher told The Epoch Times’s “Crossroads” program in a wide-ranging March interview.

Rep. Meijer is being challenged by Audra Johnson and Tom Norton. Both are running as conservatives who are passionate about the America First agenda of following the U.S. Constitution, Border Security, Trump’s economic plan, and gun rights.

Johnson calls herself a constitutional conservative and has vowed to fight for Trump policies.

Norton, an Afghanistan War veteran and former Sand Lake Village Housing President, said Meijer’s vote to impeach “was a violation of the Constitution” because it lacked “due process.”

“If you can violate due process of law for a sitting president of the United States,” Norton continued, those rights could be taken from “every American.”

Newhouse has state Rep. Brad Klippert and former GOP candidate for governor, Loren Culp running against him for his House seat. Culp filed a statement of candidacy in April.

Rice is being challenged by Mayor Mark McBride who said his 12 years as Mayor of Myrtle Beach, South Carolina, and his support of the America First agenda makes him the best candidate for his district.

“Tom Rice betrayed President Trump and South Carolina by joining Nancy Pelosi and the Democrats to impeach the president unconstitutionally after his term expired,” said McBride in a Facebook statement.

Upton who since the impeachment in February has become the vice-chair of the bipartisan House Problem Solver Caucus is being primaried by state Rep. Steve Carra and Berrien County Commissioner Ezra Scott.

Chris Mathys is challenging Valadao of California. In his online biography, he states that he gets his strength from God and not the government.

“I will stand up for America, always putting God, family, and country first. We must defend our freedoms, our conservative values, the voters of our district and former President Donald Trump,” said Mathys in a press statement.

Rep. Katko of New York currently is the only one of the 10 that does not have a challenger yet.

Could Trump Become Speaker of the House?