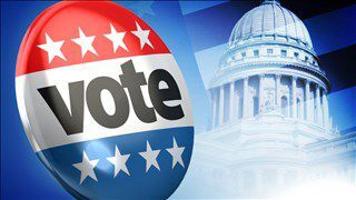 They both oppose government mandates intended to slow the spread of the coronavirus and the notion of cutting law enforcement spending after the death of George Floyd while in the custody of Minneapolis police.

With so many similar stances, the choice for primary voters may come down to differences in backgrounds and priorities.

Van Orden, 50, who grew up in Hartland, is a retired U.S. Navy SEAL who served around the world in the military for 26 years, including five combat deployments.

He also did an acting turn in three films including “Act of Valor,” wrote the book “A Book of Man: A Navy SEAL’s Guide to the Lost Art of Manhood” and worked as a business consultant and cafe operator before moving to a hobby farm in Pierce County last year, according to his campaign website.

“Every time there has been a place where something had to be done to protect America I have gone there. Right now the place I can go to protect Wisconsinites the most is Washington, D.C.,” Van Orden said. “It is time right now for tested, proven leadership.”

Ebben, 30, a Stevens Point native who grew up in Westfield, is a marketing generalist for Prevea Health. After graduating from UW-Eau Claire, she worked in public relations for the Minnesota cities of Minnetonka and Eden Prairie before returning to Eau Claire in 2017.

“My opponent just moved here. I’m rooted here,” Ebben said. “I know the district. I know it well. My priorities will be those of the district.”

Neither Ebben nor Van Orden has previously run for elected office, but both cited turning points that made them decide to throw their hats in the ring.

For Van Orden, it came last December when Kind and other Democrats in the House of Representatives voted to impeach the GOP president on charges of abuse of power and obstruction of Congress. Van Orden argued the impeachment was carried out for “purely political reasons.”

Ebben said her decision to run was motivated by her disapproval of the “despicable” impeachment process, the lack of due process in the confirmation hearings for Supreme Court Justice Brett Kavanaugh and the delay in passing the United States-Mexico-Canada Agreement on trade.

Now that she is in the race, Ebben said her top three priorities, if elected, would be opposing abortion rights, supporting 2nd Amendment rights and creating advisory boards of district officials and residents to advise her on key issues.

Regarding the nationwide calls for racial justice and police reform in the wake of Floyd’s May 25 death after a Minneapolis police officer kneeled on his neck for nearly nine minutes, Ebben said people need to communicate more to promote a sense of community and maintained that western Wisconsin law enforcement agencies have some of the highest standards in the country. She said a House reform bill that would end qualified immunity for officers would lead to a mass exodus from policing.

“I back the badge because they uphold law and order in our communities and keep us safe,” she said.

Van Orden also said he opposes ending qualified immunity for officers as well as calls to defund the police. Instead, he pledged to work as hard as he can, if elected, to defund Planned Parenthood and stressed his belief that life begins at conception and that the number of abortions in the U.S. amounts to “genocide.”

In addition, Van Orden mentioned his opposition to any laws infringing on gun rights as a priority.

He also called for regaining control of U.S. borders and lowering health care costs by replacing the Affordable Care Act.

“The last vestiges of the disastrous Obama Care must be removed, and the free market must set prices,” his website states.

Both Van Orden and Ebben said they objected to state and local stay-at-home orders issued by Gov. Tony Evers and county public health departments in hopes of stemming the COVID-19 pandemic that state Department of Health Services statistics show as of Friday had claimed nearly 1,000 lives and resulted in 58,768 positive tests statewide.

The challenge is to figure out how to safely and efficiently figure out how to open up the economy while respecting people’s property rights and following the science to improve safety, said Van Orden, who referred to the government mandates as “socialism” and said he learned in his world travels that socialism never works.

“We have the most intrusive government measures taking place in the United States since World War II,” he said. “When we have government reaching into every single aspect of our lives and saying if you are an essential or nonessential worker, that’s just inappropriate. When did supporting a family become nonessential?”

Mask mandates are another example of inappropriate government interference, Van Orden said, maintaining that owners should decide policies in their businesses and consumers should then decide which businesses they want to support.

Ebben called getting children back to school safely the “biggest priority in our nation, our state and our district right now,” saying society needs to return to a normal routine after the disruption of the COVID-19 pandemic. “It’s a disease that’s going to be present and the the best thing we can do is move forward,” she said.

Ebben said she believes states acted hastily in ordering lockdowns and should have allowed businesses to find ways to stay open safely.

“When it comes down to it, it was an infringement upon people’s personal liberties for government to determine whether they could keep their businesses open,” she said.

The winner of Tuesday’s GOP primary will take on the winner of the Democratic primary between Kind and retired pediatrician Mark Neumann of La Crosse in the Nov. 3 general election.

As energy secretary, Rick Perry mixed money and politics in Ukraine. The...