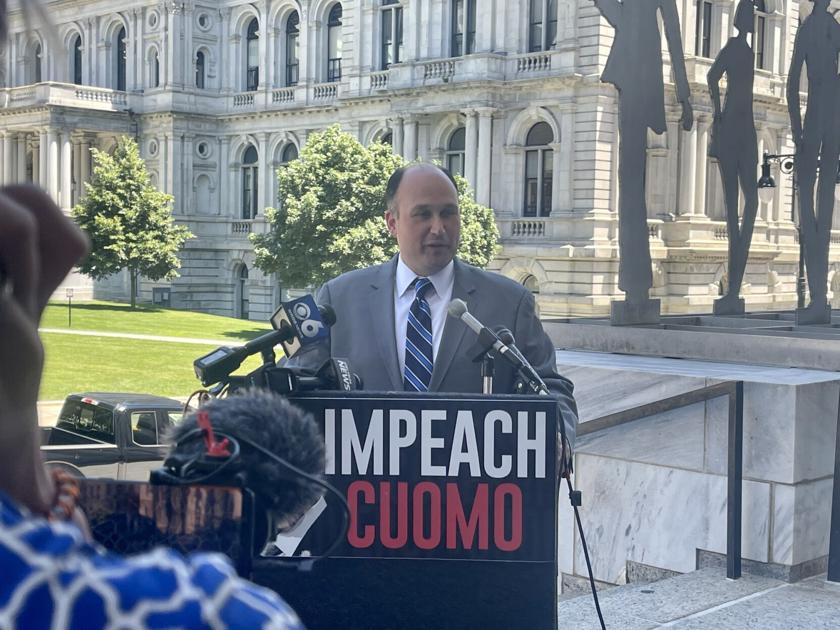 Few details have emerged about the 21-member Assembly Judiciary Committee’s impeachment probe into the governor for a myriad of accusations. Counsel has received more than 200 tips and contacts as part of the Legislature’s investigation into corruption in the executive chamber.

“New York state government is corrupted to its core with the national poster child being Governor Andrew Cuomo,” Langworthy said Thursday afternoon outside the Legislative Office Building on State Street, across from the state Capitol. “The minions that he controls in the Legislature are really protecting him.”

The Assembly Judiciary Committee continues to progress with an impeachment probe examining if Cuomo threatened his staff to unlawfully withhold or misrepresent COVID-19 nursing home and congregate fatality data required by the Legislature and government entities; allegations of sexual harassment and misconduct by at least nine women; if the governor used state resources to produce his pandemic memoir, “American Crisis: Leadership Lessons from the COVID-19 Pandemic,” for which he was paid $5.1 million; and questions about the structural integrity of the Tappan Zee Bridge replacement named for his father, Gov. Mario Cuomo.

“(Assembly Speaker) Carl Heastie and (Senate Majority Leader) Andrea Stewart-Cousins, they packed up and they headed to the beach … they couldn’t get out of Albany fast enough and end this session,” Langworthy said. “They did not want to face the music as to what’s going on with this sham of an impeachment.”

The governor has repeatedly denied any wrongdoing. He and his administration remain under concurrent investigations by state Attorney General Letitia James and federal prosecutors.

Dozens of legislators have spoken out against Cuomo or called for his resignation since March. The state GOP chair said the Legislature has the votes to remove the governor from office.

“What they lack is the courage to call the question,” Langworthy added. “They lack the integrity to actually bring articles of impeachment to the floor. It’s a sham of a so-called investigation.”

Langworthy also chastised Cuomo for celebrating the end of the pandemic with multiple fireworks displays across the state Tuesday night, but leaving the state of emergency and his expanded spending and executive authority in place.

All but a few of the state’s capacity, additional health screening and disinfecting requirements were lifted in social and commercial settings Tuesday after Cuomo announced 70% of New York adults had received at least one COVID-19 vaccine dose.

“The tens of thousands of cheering New Yorkers on Tuesday fully understood this was about celebrating the essential workers and turning the page on this pandemic,” Rich Azzopardi, Cuomo’s senior adviser, said in a statement Thursday. “Langworthy and the other out-of-touch members of the New York chapter of Trump’s Pom Pom squad are lying and dividing for their own craven political ends. No one buys his garbage.”

Assembly Minority Leader William Barclay, R-Pulaski, and Senate Minority Leader Robert Ortt, R-North Tonawanda, reiterated their plea to remove mask mandates for children in schools, summer camps and other indoor settings, and for Cuomo’s expanded authority to cease with the lifting of other pandemic rules.

“The governor still has his unilateral power, but failed to lift mask mandates for school children,” Barclay and Ortt said in a statement. “The Senate and Assembly Republican conferences have repeatedly called on the Governor to loosen the mask restrictions in our schools, particularly in light of recent high summer temperatures … We have two options: The governor can heed the concerns of parents and school officials and leave this decision to local school districts and health officials, or the state legislature should immediately reconvene to repeal these unnecessary restrictions on school children.

“Gov. Cuomo and Albany Democrats may be content to ignore pleas from children, parents and school districts,” they added, “the Senate and Assembly Republicans are not. We need action to unmask our children now.”

Parents, child caretakers and other local officials around the state plan to protest against the continuing requirement for children wearing facial coverings next weekend. Dozens of parents and lawmakers rallied to “unmask our kids” outside the Capitol on June 10, the last day of legislative session.

Langworthy on Thursday echoed the Republican leaders’ sentiments, saying all remaining COVID-19 rules and restrictions in the state should be removed — especially the state of emergency, which continues the governor’s broadened spending and executive powers.

“We need to strip that power immediately,” Langworthy said.

As an Amazon Associate I earn from qualifying purchases.

Inside Trump’s intense search for a Cheney challenger