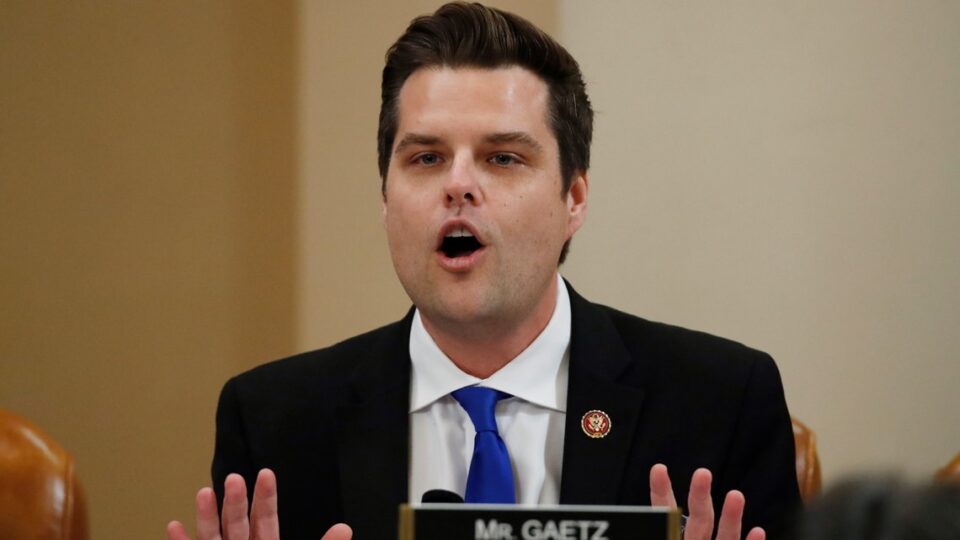 Barely four years after arriving to Washington, the GOP legislator from Florida and defender of Trump, faces an end to his once promising career.

Compared with most congressional newbies, it didn’t take Rep. Matt Gaetz long. Phone calls from the president. Rides aboard Air Force One. Hundreds of television appearances. A darling in conservative circles.

Yet barely four years after arriving in Washington as a little-known Republican state legislator from Florida’s Panhandle, the 38-year-old unblushing defender of Donald Trump is facing a possible abrupt end to his once promising career because of a  federal sex-trafficking investigation.

The overwhelming reaction of Gaetz’s GOP colleagues — a deafening silence. That reflects the resentments he’s sparked during his breakneck rise as one of the party’s celebrities and the challenge he faces to retain his seat.

Government agents are investigating if Gaetz had sex with a 17-year-old and other underage girls and violated federal sex trafficking laws, people familiar with the probe have told the AP. No charges have been filed, and Gaetz has denied the allegations.

But with new, damaging details emerging regularly, Gaetz’s political arc is beginning to resemble the myth of Icarus, who plunged to earth after ignoring warnings that his waxen wings would melt if he flew too close to the sun.

The coming days will test the crisis management skills of one of the most visible members of Congress’ younger generation, who critics say care more about promoting their own brand than serious legislating.

“They’re here for notoriety and to perform to their base, and anything else that may come is secondary,” said Doug Heye, a Trump critic and former top GOP congressional aide. “And if you boo him that’s great too, as long as you’re watching.”

David Bossie, president of Citizens United, which backs conservative causes and candidates, countered that Gaetz “has been a conservative warrior, working every day to make America great again and fight for President Trump’s agenda.”

Gaetz’s congressional Twitter account is topped with a photo of himself taking a selfie with Trump, apparently on Air Force One. On his personal Twitter account, Gaetz describes himself as “Florida man. Fiancé. Firebrand. America First.” He became engaged at Trump’s Mar-a-Lago estate in Florida in December.

Gaetz is quick with a quote and looks little older than a college student. And by his own account, he’s hardly led a prudish lifestyle while battling for conservative causes.

In his 2020 autobiographical book, “Firebrand,” Gaetz praised Trump as someone “who doesn’t care for puritanical grandstanding or moralistic preening.” He added, “If politicians’ family lives aren’t what really matter to the voters, maybe that’s a good thing. I’m a representative, not a monk.”

Chris Latvala, a former GOP colleague in the Florida legislature, suggests that while there, Gaetz went too far. On Friday, Latvala revived a 2020 tweet in which he accused Gaetz of creating a “game where members of the FL House got ‘points’ for sleeping with aides, interns, lobbyists, and married legislators.”

Latvala wrote Friday, ” I am just sorry that this guy may have victimized others, including possibly minors before others came forward to verify it.”

The game was also described by two other Florida Republicans, who spoke on condition of anonymity to reveal what was a private matter. Gaetz has denied knowing about it.

The son of Don Gaetz, a wealthy businessman and one-time Florida state Senate president, Matt Gaetz came to Congress after six years of building his conservative credentials in the state House with pro-gun and other legislation.

The day before a House hearing on the Russia investigation in 2019, Gaetz tweeted at former Trump attorney Michael Cohen, who’d turned on Trump and was about to testify, asking, “Do your wife & father-in-law know about your girlfriends?” The House Ethics Committee formally admonished Gaetz for the tweet, which some saw as an attempt at intimidation, and he apologized.

Gaetz was highly visible again months later when the House began its impeachment investigation over Trump’s efforts to pressure Ukraine to provide political dirt on Democrat Joe Biden, who would eventually defeat Trump in the election.

Most notably, Gaetz led a cluster of House Republicans who barged past Capitol Police officers into a secure basement meeting room where House Intelligence Committee members were questioning witnesses. They caused a delay of several hours that had little impact on the probe but garnered press attention.

Gaetz was grabbing the spotlight in other ways, too. He brought a white nationalist who questioned the Holocaust as his guest to Trump’s 2018 State of the Union address, later claiming ignorance of the man’s views.

In March 2020 as the pandemic was taking hold, Gaetz wore a gas mask on the House floor. Critics accused him of downplaying COVID-19, as Trump repeatedly did, but Gaetz asserted he was calling attention to lawmakers’ vulnerability to the disease.

All the while, his visibility was growing. Gaetz has made 346 weekday cable news appearances since August 2017, according to Media Matters, a liberal group that monitors conservative media activity.

That makes Gaetz second in Congress only to Rep. Jim Jordan, R-Ohio, a fellow Trump ally and ubiquitous TV presence.

Through it all, Gaetz has shown no hesitation to criticize fellow Republicans.

In a 2020 tweet, he accused Senate Intelligence Committee Chairman Richard Burr, R-N.C., of “screwing all Americans” by dumping stock using insider information as the coronavirus pandemic was starting. The Justice Department investigated Burr but brought no charges.

In Gaetz’s book, in a first chapter called “Sex and Money,” he wrote that when he arrived in Congress, he asked current House Minority Leader Kevin McCarthy, R-Calif., for a seat on the Armed Services Committee. Gaetz wrote that “to my shock,” McCarthy suggested he contribute $75,000 to the House GOP’s campaign committee — a donation Gaetz wrote he actually doubled.

This past January, Gaetz helped spearhead an effort to depose Rep. Liz Cheney, R-Wyo., from her post as No. 3 House GOP leader after she was among 10 Republicans to vote for Trump’s second impeachment.

Gaetz even traveled to a campaign event in Wyoming, where he urged voters to oppose her 2022 reelection and accused her of ignoring “the will of the people.” Days later, Cheney was reelected to her leadership post.

All of that helped alienate him from many Republicans, several GOP lawmakers and aides said.

Among his only defenders this week has been Rep. Marjorie Taylor Greene, R-Ga., who tweeted, “Take it from me rumors and headlines don’t equal truth.” Greene has become a pariah even among some Republicans for showing support for false and violent sentiments.

Having a deep well of support among colleagues can help a beleaguered lawmakers retain their seat should party leaders begin viewing them as a liability. Ominously, McCarthy has called the charges against Gaetz “serious.”

Gaetz has reportedly had inconclusive discussions with Newsmax, a small pro-Trump television outlet, about working for it or another network. A person close to Newsmax said Friday the network has no plans to hire him as a talent.