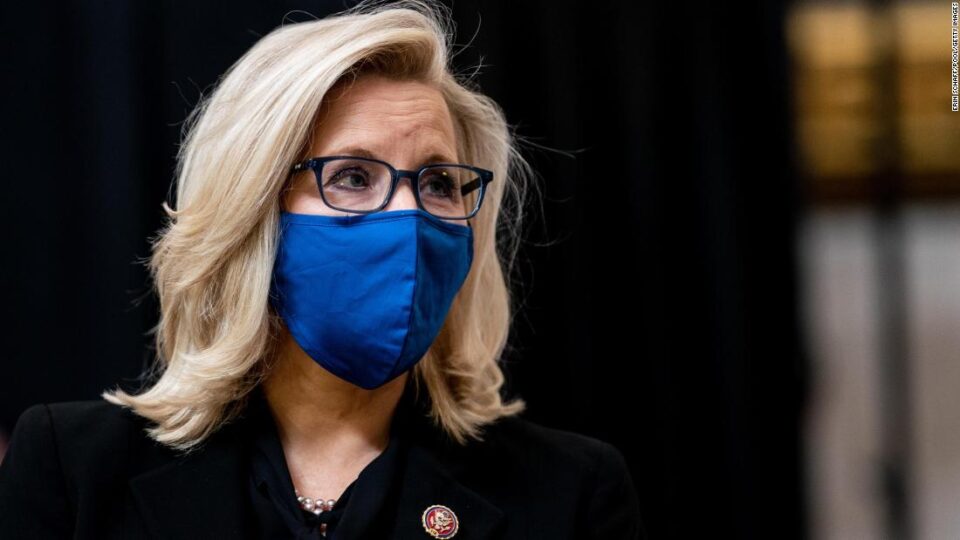 But despite the intraparty pressure in Washington and primary challengers lining up to take her on in Wyoming, Cheney appears to be uninterested in backing away from her views, with one ally saying that the congresswoman believes strongly that what happened January 6 undermines democracy and the future of the Republican Party.
Cheney, who has openly disagreed with many in her caucus about the role Trump played in the 1/6 insurrection, and who voted for his impeachment, is again facing increasing pressure, after House GOP Leader Kevin McCarthy was asked last week if Cheney was still a good fit for leadership. He declined to endorse her, instead saying Cheney’s future would be determined by the caucus.

In interviews with CNN, two Republican lawmakers told CNN that Cheney’s comments this week have once again opened old wounds within the GOP conference, forcing members to once again reckon with whether she is the best fit as their leader. As CNN has previously reported, there is little indication anything will come of the frustration. The party is still more interested in moving on than fixating on trying to oust Cheney. But members who spoke with CNN on the condition of background to speak freely about the tensions said they feel that Cheney is not speaking for the conference.

“It’s like ‘hey if you want the position, there is some responsibility that comes with it,'” one GOP lawmaker told CNN. “It’s a tough time for the elephants and so this is a complication that comes from within, which is quite frankly not helpful in any way, shape or form.”

The person added “you only got two letters and it is only M-E or U-S.”

In large part, Cheney’s comments this week were spurred by a series of interviews and questions she received about the events of January 6 and how McCarthy, a California Republican, has downplayed former Trump’s role in the attack, but her comments have once again revealed tension within the GOP that aren’t likely to disappear given that Cheney isn’t going to back away from her views that in order for the Republican Party to succeed in 2024, it must move beyond Trump.

Another GOP lawmaker told CNN that the frustration is even more palpable this time.

“It’s real and much more widespread than before and completely of her own making,” the lawmaker said. “At this point, it has zero to do with her vote and everything to do with her words and actions.”

In February, Cheney overwhelmingly kept her leadership position in a secret ballot vote 145-61 — but GOP sources on the Hill tell CNN there is irritation and a lack of patience that she continues to so publicly attack members in the party and keeps going head-to-head with McCarthy.

Two House Republicans who supported Cheney staying in her leadership post believe that the conference could vote again to oust her amid the fallout from her comments about Trump at the party’s retreat earlier this week.

And it’s anyone’s guess how it could turn out, given that it’s a secret ballot.

A senior House Republican, who backed Cheney in the past, predicted to CNN that she could be “in very big trouble” and stands on shaky ground to remain as the No. 3 in the House Republican Conference. “Members of all stripes were really upset she trampled all over the messaging and unity we otherwise had at the retreat.”

The source said while it’s “unclear” when such a vote to oust her would occur, he predicted that a vote is “inevitable” and that this time, she actually could lose. Another member agreed that a vote seems likely. A third House Republican who backed her in the last vote says she has “less support than she thinks.”

“The only thing she has going for her are reasonable members like me who have lost confidence in her but fear the bad press and disruption this will cause,” the first lawmaker said.

That lawmaker said there is simmering tension between Cheney and McCarthy, whom the source said has been “furious” at her for weeks. McCarthy’s office didn’t respond to a request for comment.

“He literally saved her last time, and she doesn’t even acknowledge it,” the source said, referring to the speech the GOP leader delivered in February during the closed-door conference meeting in support of Cheney.

Some in the House Freedom Caucus, who still back Trump and led the efforts against Cheney back in February, see Cheney’s recent actions as a sign they were right to question her role in leadership. However, her very open anger towards Trump and his role in the riot, echoes Senate Minority Leader Mitch McConnell’s position — that the party needs to move on from the Trump era if it hopes to win back either the House and/or the Senate next year.

One issue facing leadership is the question of who would replace her in the No. 3 spot.

Multiple sources tell CNN the GOP leadership feels like they can’t replace her with a man. One person whom sources say could fill the role is New York Rep. Elise Stefanik, but she is likely not willing to step up, as she is reportedly considering a run to challenge New York Democratic Gov. Andrew Cuomo.

Cheney is also facing a backlash in Wyoming fomented by the former president, who won her state last year with nearly 70% of the vote, the most of any state in the country.

After Cheney voted to impeach Trump, saying he “summoned,” “assembled” and “lit the flame of this attack,” the Wyoming Republican state party censured her, and said that “there has not been a time during our tenure when we have seen this type of an outcry from our fellow Republicans.” State senator Anthony Bouchard and state Rep. Chuck Gray launched campaigns against her, and the Trump political operation commissioned a poll claiming the impeachment vote hurt her popularity in the state.

But Cheney, who won reelection in 2020 with 69% of the vote, still has a substantial following in the state and raised $1.5 million in the first three months of the year.

Wyoming state GOP Rep. Landon Brown predicted that Bouchard and Gray will “end up splitting the vote between their faction of Republicans” and Cheney will receive at least 40% of the vote.

“There’s way too much credence being given to these two — she’s a juggernaut and is an amazing ambassador for our state,” Brown said. “They just see through a different set of glasses than reality.”

Trump and his son Donald Trump Jr. have warned about that potential outcome. In March, Trump Jr. publicly pushed Wyoming to pass a bill creating an election runoff, which could’ve forced Cheney into a race against one other Trump-backed candidate. But the bill died in the state Senate after a narrow, 14-15 vote.

The former president then said in mid-April that he’d endorse a 2022 candidate against her “soon,” claiming that “the only way she can win is numerous candidates running against her and splitting the vote.”

“So many people are looking to run against Crazy Liz Cheney — but we only want one,” Trump said.

Still, Cheney has plenty of allies in the conference — and they are defending her for standing up for her beliefs.

“If a prerequisite for leading our conference is lying to our voters, then Liz is not the best fit,” said Rep. Anthony Gonzalez, an Ohio Republican who also voted to impeach Trump. “Liz is going to be honest, straight up and going to stand her own ground.”

This story has been updated with additional developments Friday