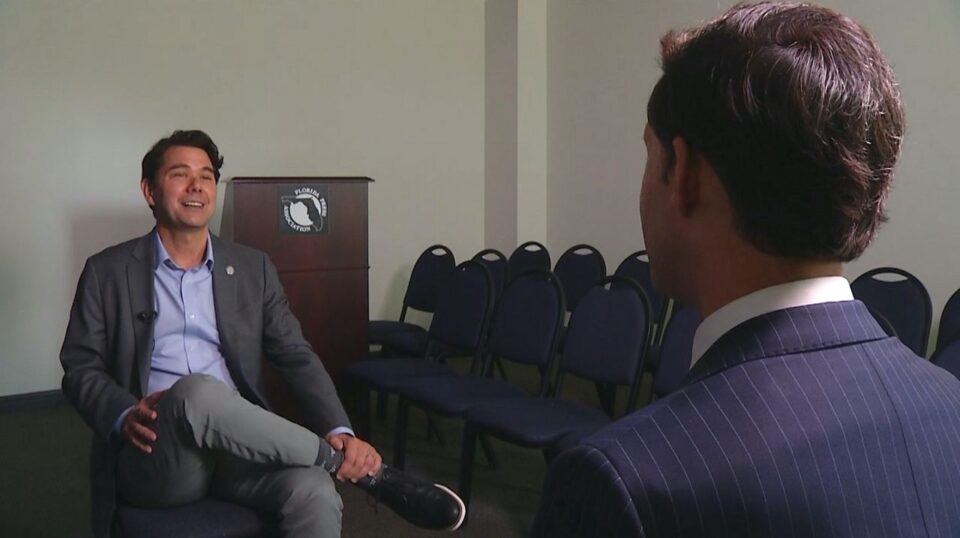 TALLAHASSEE, Fla. — Miami City Commissioner Ken Russell — a former surfboard salesman whose first foray into politics was prompted six years ago by his frustration with local environmental stewardship — is preparing to catch what he predicts will be a wave of voter disenchantment with partisan politics, launching a campaign this month to unseat Sen. Marco Rubio.

What You Need To Know

But to take on Rubio, Russell will have to prevail in a Democratic primary many Florida political prognosticators say is Val Demings’ to lose.

The Orlando-area congresswoman announced her own U.S. Senate bid earlier this month, raising $1 million within 24 hours of doing so. Her national profile — she was a House manager of former President Donald Trump’s first impeachment trial before making President Joe Biden’s vice presidential shortlist last year combined with a nearly three decade career in law enforcement  — is leading top party power brokers to lend her their backing.

It’s a situation that makes Russell the decided underdog in the race.

“I’m under no misconception that I’m not very well-known outside of my neighborhood,” he said during an interview Thursday in Tallahassee, where he was kicking off a monthslong-tour of Florida’s 67 counties.

But of the Democratic electorate, he added, “I think Florida’s one big neighborhood, and once they get to know me I hope they see what my neighbors see.”

Russell first ran for the Miami City Commission in 2015 after what he says was an infuriating lack of action by officials to clean up a contaminated park in his neighborhood. His experience in the watersports industry had informed his views regarding environmental policymaking, and a series of statewide water crises in the last several years piqued his interest in running for Senate.

“I used to teach kitesurfing, eight hours a day, in Biscayne bay, and a couple friends of mine out there caught MRSA, just being out in the water with an open wound,” he said. “We have beaches closed for bacterial contamination, we’ve got red algae on the west coast, blue-green algae on the east coast. Every part of Florida’s having a water quality crisis right now, and nobody’s taking it seriously enough to put the pieces together.”

Especially not Rubio, Russell argued, saying he’d never met the two-term Republican incumbent, despite his role as vice chair of the Miami City Commission and the fact that both men live in Miami-Dade County.

His critiques of Rubio notwithstanding, Russell faces a formidable challenge convincing Democratic primary voters that he would make a better nominee than Demings. In the interview, he said he would refrain from attacking Demings or any other Democrat and focus instead on issues.

“I’m certainly used to swimming with sharks,” he noted with a smile.